An annual influenza (flu) vaccination is recommended by the Advisory Committee on Immunization Practices (ACIP) for all persons aged ≥6 months who do not have contraindications to vaccination and is the primary way to prevent sickness and death caused by flu.(1) The 2017–18 flu season was considered a high severity season with high levels of outpatient clinic and emergency department visits for flu-like illness, high flu-related hospitalization rates, and elevated and geographically widespread flu activity across the United States for an extended period.(2) The Centers for Disease Control and Prevention (CDC) analyzed data from the National Immunization Survey-Flu (NIS-Flu) to estimate flu vaccination coverage for the US population of children 6 months through 17 years during the 2017–18 flu season. Receipt of flu vaccination was determined by parental report. Vaccination coverage with >1 dose of flu vaccine was 57.8%, a decrease of 1.2 percentage point from the previous flu season. Vaccination coverage varied by state and age group. To improve flu vaccination coverage, healthcare providers are encouraged to assess the vaccination status of their patients at every visit and make a strong recommendation and offer for flu vaccination.

For this report, CDC analyzed data from the NIS-Flu for children 6 months through 17 years to estimate flu vaccination coverage from the 2017–18 flu season. NIS-Flu data were collected from October 2017 through June 2018 from all 50 states and the District of Columbia to estimate vaccination coverage for vaccines administered from July 2017 through May 2018 for the 2017–18 flu season. These findings were compared with 2016–17 flu season estimates. The NIS-Flu has three components: the NIS-Child, which includes households with children 19–35 months, the NIS-Teen, which includes households with children 13–17 years, and a short flu vaccination module (NIS-CIM), which is conducted for households with children 6–18 months or 3–12 years. Prior to 2018, the NIS-Flu was a national dual landline and cellular list-assisted random-digit-dialed telephone survey of households; however, beginning in January 2018 the NIS-Flu became a cellular only telephone survey and no longer samples landline telephones. Preliminary analysis comparing influenza vaccination coverage estimates between the sampling frames indicates that the change in sample frame did not affect overall estimates (personal communication, NORC at the University of Chicago).

Respondents ≥18 years were asked if their child had received a flu vaccination since July 1, 2017, and, if so, in which month and year; this information was parent-reported and not verified by medical records. The range of the Council of American Survey and Research Organizations (CASRO) response rates for the NIS-Flu across the components of the NIS-Flu were 47.5% to 50.4% for landline (2017 sample) and 22.8% to 24.6% for cellular telephones (2017 and 2018 sample). Flu vaccination coverage estimates were calculated using Kaplan-Meier survival analysis to determine the cumulative flu vaccination coverage (≥1 dose) July 2017 through May 2018 using monthly interview data collected October 2017 through June 2018. For the 20.0% of respondents who indicated their child had been vaccinated but had a missing month of vaccination, month was imputed from donor pools matched for week of interview, age group, state of residence, and race/ethnicity. Children with a missing parental response for the vaccination status question (2.8%) were excluded from analyses. Results were weighted and analyzed using SAS and SUDAAN statistical software to account for the complex survey design. Differences between groups and between 2016–17 and 2017–18 seasons were determined using t-tests with significance at p<0.05. Differences mentioned in this report were statistically significant.

There was large between-state variability in flu vaccination coverage among children, ranging from 42.8% (Wyoming) to 76.6% (Rhode Island; Figure 2). See the interactive FluVaxView application for additional state-level estimates by age-groups and multiple flu seasons.

Vaccination coverage among children during the 2017-18 season remains low. Survey data indicated a slight decrease in coverage compared to the 2016-17 season; the observed decrease may reflect true lower coverage or may be due to limitations of this telephone survey described below. Annual flu vaccination remains an effective way to prevent flu illness. During the 2017-18 flu season, 180 lab-confirmed pediatric deaths were reported; for children eligible for vaccination and for whom vaccination status is known, 74% were not vaccinated.(3) Common reasons parents give for not having their child receive a flu vaccination include: the child is unlikely to get the flu or get very sick from the flu, the child is not in a high risk group, and concern about side effects from the vaccine.(4) As the 2018–19 season is beginning, it is important that providers prioritize flu vaccination for their patients. This includes client reminders when flu vaccination supplies become available, assessing the vaccination status at every visit, making an effective recommendation for vaccination, and offering the vaccine. For more information about influenza, including flu vaccine recommendations, flu activity and surveillance, and resources for discussing flu vaccination with patients, visit the CDC flu webpage. 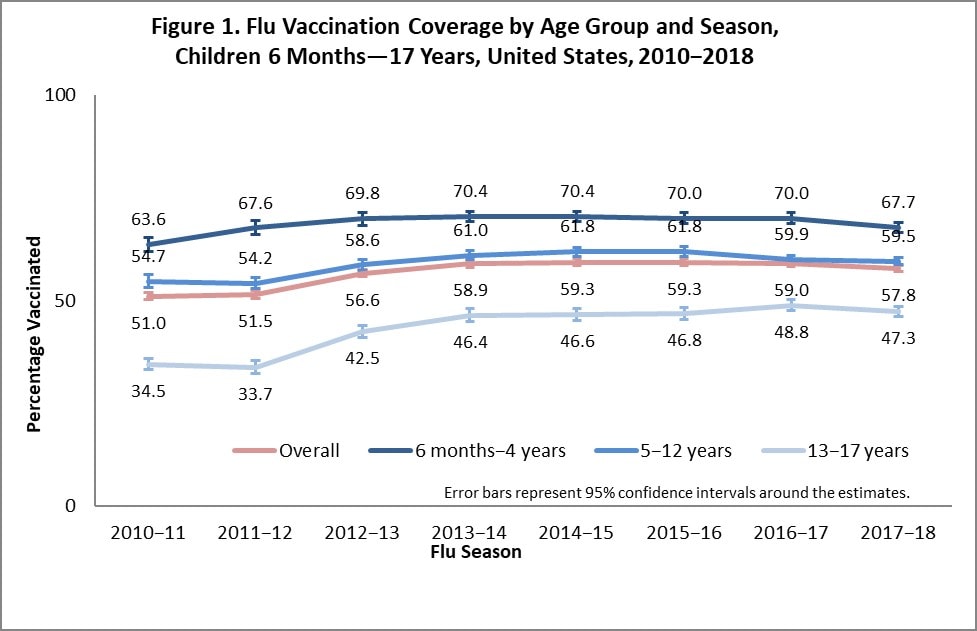 Additional flu vaccination coverage estimates for the 2017–18 and earlier flu seasons by state and Health and Human Services (HHS) region are provided on FluVaxView as interactive maps, figures, and tables. Flu vaccination coverage was estimated for additional age groups, and by gender, race/ethnicity, and select local areas including territories (see below).

The estimates in this report are subject to the following limitations. First, flu vaccination status was based on parental report and not validated with medical records and, thus, is subject to recall bias.(5-6) A recent study of children 6–23 months included estimates of flu vaccination coverage with ≥1 doses based upon provider report; when these estimates were compared with the parent-reported estimates found on FluVaxView, the parent-reported estimates were between 12–17 percentage points higher than provider report for the 2010–11 through 2012–13 flu seasons. Incomplete records and reporting, however, might affect provider-reported vaccination histories.(7) Second, response rates for NIS-Flu was low and nonresponse bias may remain even after weighting adjustments. A comparison of NIS-Flu estimates with those from National Health Interview Survey (NHIS) suggests that the NIS-Flu estimates are biased upward (see box above). Comparisons of estimates across seasons could be biased if there are changes in accuracy of parent-reported vaccination or nonresponse bias over time.