The drop in birth rates from 2007 through 2013 has been well documented (1). However, it is also important to examine total rates of pregnancy and other pregnancy outcomes (abortion and fetal loss) to provide a comprehensive picture of current reproductive trends. This NCHS Health E-Stat uses data from 2010 to update a previous NCHS report on pregnancy rates (2). Data on pregnancy outcomes by age and race and Hispanic origin are presented.

While pregnancy estimates are constrained by the availability of data for all three outcomes, births comprise the majority (almost two-thirds) of all pregnancy outcomes, and birth rates continued to drop during 2011–2013 (1). The most recent national abortion estimates also show the number and rate of abortions dropped between 2010 and 2011 (3).

This analysis combines data on births from the National Vital Statistics System, data on abortions from the Abortion Surveillance System and Guttmacher Institute, and data on fetal losses from several cycles of the National Survey of Family Growth. Numbers and rates of these pregnancy outcomes are computed separately and added together to derive total pregnancy numbers and rates. The methodology has been discussed in detail elsewhere (4, 5). Estimates of fetal losses depend on the degree to which losses at very early gestations are detected. Detailed tables with number of pregnancies by outcome for 2010 by age and race and ethnicity, pregnancy rates by outcome for 1990–2010 by age and race and ethnicity, and pregnancy rates by marital status and race and ethnicity are available by request from Births@cdc.gov. 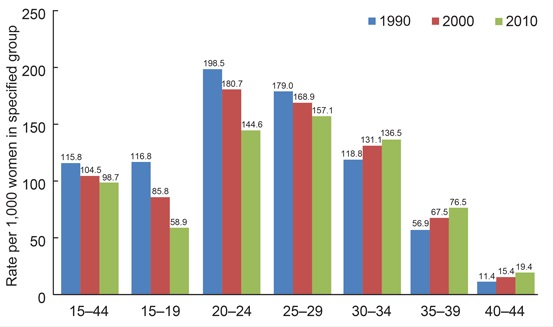 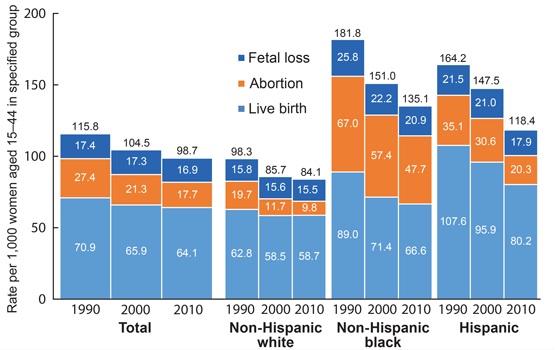 1Spontaneous fetal losses from recognized pregnancies of all gestational periods as reported by women in the 1982, 1988, 1995, 2002, and 2006–2010 National Surveys of Family Growth, conducted by the National Center for Health Statistics. The rate of pregnancy loss depends on the degree to which losses at very early gestations are detected.
2Computed by relating the number of events to women of all ages to women aged 15–44.

NOTES: Due to rounding, figures may not add to totals. Rates for 2001–2005 have been revised using intercensal population estimates based on the 2000 and 2010 censuses and may differ from rates previously published.