Menthol cigarettes, including how and to whom they are marketed and sold, are a significant risk to public health and advancing health equity due to their role in initiation, progression to regular smoking and dependence, reduced cessation success, and in contributing to health disparities. 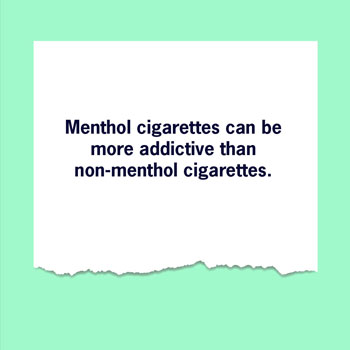 The tobacco industry targets menthol cigarette marketing to certain populations through advertisements, giveaways, lower prices, lifestyle branding, and event sponsorships. For example, tobacco companies have heavily marketed in Black-owned publications, through sponsorship of jazz concerts and certain civil rights groups, through advertisements showing people dressed in clothing popular with rap and hip-hop artists, and in neighborhoods with more Black residents.1,2,3,4,5 These aggressive marketing tactics likely have contributed to some groups of people having higher rates of use than others. Given how menthol interacts with nicotine, people who smoke menthol cigarettes are also more likely to continue smoking, which puts them at higher risk of getting tobacco-related diseases.1,6,7

The tobacco industry uses similar strategies to market menthol cigars. For example, tobacco companies published advertisements in newspapers with a large proportion of readers who were Black persons. More recently, the industry has advertised menthol cigars on social media and has used hip-hop and rap artists, models, and music that are appealing to youth.2,8

Menthol cigarettes put your health at risk just as much as any other type of cigarette.

It is estimated that menthol cigarettes resulted in a total of 3 million years of potential life lost during this period.11

Menthol increases initiation and dependence in youth and young adults.

Menthol makes cigarettes more appealing and easier to smoke.9 In addition, menthol enhances the addictive effects of nicotine in the brain.9 The amount of nicotine, the addictive drug in tobacco products, in menthol cigarettes has increased in recent years.10

Menthol in cigarettes makes it more likely that youth and young adults will try smoking and that those who start smoking will continue to smoke on a regular basis.9