A cigar is defined as a roll of tobacco wrapped in leaf tobacco or in a substance that contains tobacco.1,2

Cigars differ from cigarettes in that cigarettes are a roll of tobacco wrapped in paper or in a substance that does not contain tobacco.

The three major types of cigars sold in the United States are large cigars, cigarillos, and little cigars.1,2

In 2022, cigars were the second most commonly used tobacco product among U.S. middle and high school students.13 The availability of flavors in cigars that are prohibited in cigarettes (such as cherry), and the fact that they are commonly sold as a single stick, has raised concerns that these products may be especially appealing to youth.4,5,6,7

In 2021, among middle and high school students who used cigars in the past 30 days, 44.4% reported using a flavored cigar during that time.3

Little cigars are the same size and shape as cigarettes, often include a filter, and are packaged in a similar way, but they are taxed differently than cigarettes. Rather than reduce consumption, people who smoke and are cost-conscious might switch from cigarettes to cheaper little cigars.2,6,8

Historically, cigar smoking in the United States has been a behavior of older men, but the industry’s increased marketing of these products to targeted groups increased the prevalence of use among adolescents.4

Cigars contain the same toxic and carcinogenic compounds found in cigarettes and are not a safe alternative to cigarettes.1,5 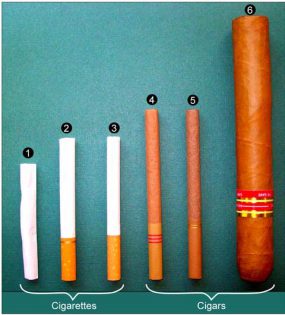 Percentage of U.S. adults who currently smoked cigars† in 2020:10

*Adults are defined as persons 18 years of age or older.
†Current cigar use is defined as smoking cigars on 1 or more of the 30 days before participation in a survey about this topic.

Marketing efforts promote cigars as symbols of a luxurious and successful lifestyle. The following strategies can contribute to the increased acceptability of cigar smoking:1,4

In 2001, the Federal Trade Commission mandated that cigar packaging and advertisements display one of the following five “SURGEON GENERAL WARNING” text-only labels on a rotating basis:12