Hepatitis A is typically a self-limited disease caused by hepatitis A virus (HAV), primarily transmitted fecal-orally after close contact with an infected person or consumption of contaminated food or water (31). Clinical symptoms are indistinguishable from acute hepatitis B and hepatitis C. Hepatitis A is an acute illness and does not result in chronic disease. The United States is considered a low endemicity country with most infections occurring among adults reporting risk behaviors or exposures such as SUD, homelessness, sexual practices resulting in fecal-oral contact, and international travel to hepatitis A-endemic countries (3, 32).

A safe and effective hepatitis A vaccine was licensed in 1995 (33). Prior to vaccine licensure and use, the number of reported hepatitis A cases was around 21,000 annually, and infections were common among children (34, 35). With the widespread adoption of the universal childhood vaccination recommendations in 2006, the overall incidence rate of hepatitis A decreased by 95% across all age groups from 1995 through 2014 (3, 33). However, the incidence rate of hepatitis A has increased since 2016 due to widespread person-to-person outbreaks, primarily among PWUD and people experiencing homelessness (36). Increases in hepatitis A have also been reported among MSM (36). A study published in 2020 showed that approximately three-fourths of US-born adults ≥20 years of age were susceptible to hepatitis A during 2007–2016 (37). During 2016–2018, approximately 15,000 hepatitis A cases were reported to CDC, representing a 294% increase compared with 2013–2015 (38). In 2018, a total of 12,474 hepatitis A cases were reported to CDC, with 24,900 estimated infections (95% confidence interval [CI]: 17,500–27,400) after adjusting for case under-ascertainment and underreporting (3). The incidence rate of hepatitis A was 3.8 cases per 100,000 population in 2018, a nearly ten-fold increase from the reported incidence rate of 0.4 cases per 100,000 population in 2014 (3).

The purpose of this section is to provide jurisdictional guidance to implement and improve hepatitis A surveillance. Information about reporting requirements, collection of relevant laboratory data, and case investigation is provided. Given that current systems for surveillance differ by jurisdiction, the standards outlined in this document are designed to provide models for best practices based on jurisdictional resources, recognizing that not every jurisdiction is able to meet those standards with available resources.

Hepatitis A surveillance data can be used to inform and improve public health interventions in the following ways:

Immunoglobulin M antibody to hepatitis A virus (anti-HAV IgM) and viremia identified by HAV NAT using polymerase chain reaction (PCR) can detect recent or current acute infection with HAV. A description of hepatitis A laboratory markers can be found in Appendix B. Figure 2-1 illustrates the typical serologic course of HAV infection and recovery. 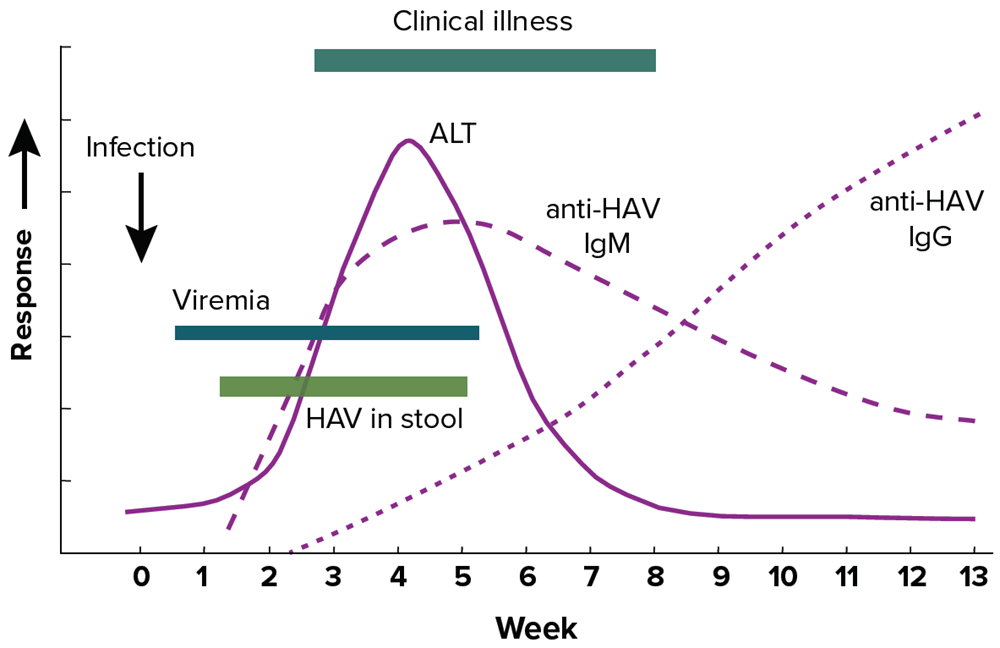 Caution should be exercised when interpreting a positive anti-HAV IgM laboratory result, as positive tests can occur in people >1 year after infection and false-positive tests can also occur in those without clinical or epidemiologic evidence of recent infection (39). A person with a positive anti-HAV IgM result may also be positive for anti-HAV IgG and total anti-HAV. Because of the risk of misinterpreting positive results, anti-HAV IgM testing should be limited to people with clinical presentation of hepatitis who are suspected of having hepatitis A. Anti-HAV IgM testing should not be used as a screening tool or as part of testing panels in the workup of abnormal liver function tests. Some conditions might cause cross-reactivity with anti-HAV IgM tests, including infection with the Epstein-Barr virus (40) and hepatitis C virus (41). Furthermore, some infected people might initially test negative for anti-HAV IgM during the first few days of symptoms (42). If there is high clinical suspicion of hepatitis A in a person who has a negative test for anti-HAV IgM early in their clinical course, repeat testing may be indicated (42). One study found that the optimal time for repeat testing is at least 2 days after ALT levels have peaked (42).

Table 2-1 interprets the combinations of total anti-HAV and anti-HAV IgM laboratory results frequently available in viral hepatitis test panels, following the biomarker changes over the course of infection as shown in Figure 2-1. If HAV RNA testing is performed, a detectable HAV RNA level indicates the presence of infection.

*Ingestion of high levels of biotin can significantly interfere with certain commonly used biotinylated immunoassays, such as those used to detect anti-HAV, and cause false-positive or false-negative laboratory test results. Currently, the US Food and Drug Administration (FDA) is investigating thresholds associated with false-positive and false-negative tests. This section will be updated as more information becomes available. Reference: https://www.fda.gov/medical-devices/safety-communications/update-fda-warns-biotin-may-interfere-lab-tests-fda-safety-communicationexternal icon.
Downloads of this table: PDFpdf icon | PPTppt icon

To aid in hepatitis A surveillance, the following laboratory markers should be reported to public health agencies:

Table 2-2. US Centers for Disease Control and Prevention (CDC) and Council of State and Territorial Epidemiologists (CSTE) case definition for hepatitis A, 2019

*Surveillance programs should provide prevention programs with information on people who have positive test outcomes for post-test counseling, as appropriate
†And not otherwise ruled out by anti-HAV IgM or NAAT for HAV RNA testing performed in a public health laboratory.
Downloads of this table: PDFpdf icon | PPTppt icon

Up to 10% of people with hepatitis A might experience a relapse of symptoms during the 6 months after acute illness. Cases of relapsing hepatitis A should not be enumerated as new cases. In addition, a case should not be counted as a hepatitis A case if there is an alternate, more likely diagnosis.

The primary method of ascertaining cases is by reviewing reports from clinical laboratories, health care facilities, and health care providers. All states should have rules or regulations requiring that these facilities report evidence of hepatitis A to public health agencies. See Section 1.6. and Section 2.5. for information on the recommended reporting requirements for hepatitis A.

All states require clinical laboratories to report hepatitis A laboratory markers, such as positive anti-HAV IgM and positive HAV RNA results.

All states require health care facilities and providers to report hepatitis A diagnoses.

Figure 2-2. Process for hepatitis A case ascertainment and classification 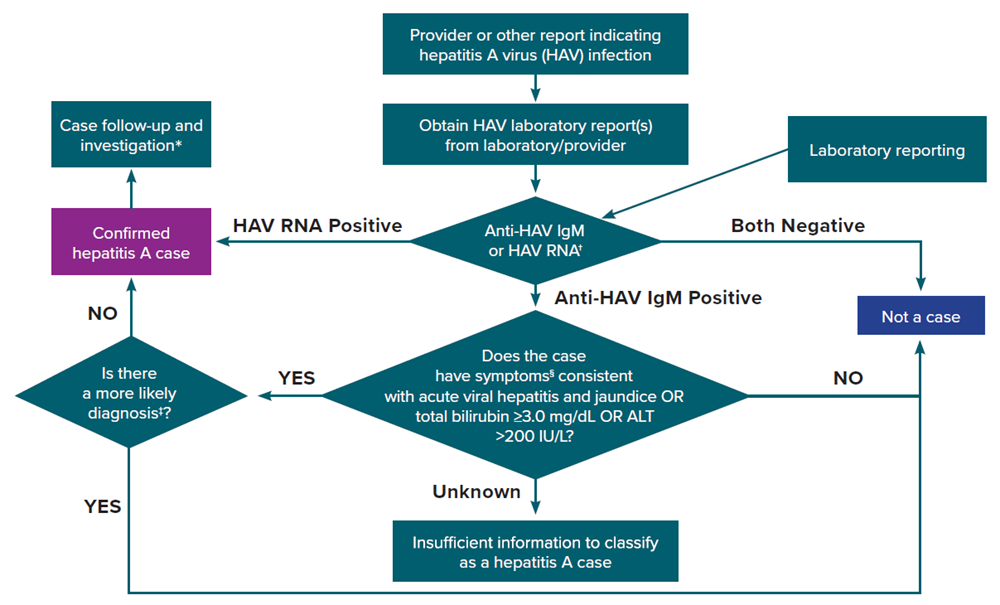 *A person who had contact with a laboratory-confirmed hepatitis A case 15–50 days prior to onset of symptoms AND meets the clinical criteria should be classified as a confirmed hepatitis A case.
†Surveillance programs should provide prevention programs with information on people who have positive test outcomes for post-test counseling, as appropriate
‡May include evidence of acute liver injury from infectious, autoimmune, metabolic, drug or toxin exposure, neoplastic, circulatory or thromboembolic, or idiopathic causes.
§Clinical symptoms include fever, headache, malaise, anorexia, nausea, vomiting, diarrhea, abdominal pain, or dark urine.
Downloads of this figure: PDFpdf icon | PPTppt icon

Reports from laboratories, health care providers, and other data sources indicative of hepatitis A should be submitted to HDs (as specified by local regulations) and investigated as soon as possible to ensure adequate time to implement preventive measures (e.g., vaccination of contacts). Suspected cases of hepatitis A should be reported with appropriate laboratory results and clinical information (Table 2-2). For general information on conducting viral hepatitis case investigations, see Section 1.10. The following is a description of the follow-up activities that should be conducted for reported hepatitis A cases:

Information from the Laboratory

Positive anti-HAV IgM and positive/detectable HAV RNA laboratory results should be reported to the HD and investigated immediately. Other laboratory information that can assist with case classification includes ALT and total bilirubin levels.

Information from the Provider or Medical Records

The following information might be available from medical records to confirm the diagnosis, inform case classification, and determine public health priority.

Information from the Patient

Resources permitting, all patients with hepatitis A should be contacted for an interview using the jurisdiction-specific case investigation form. At a minimum, all patients who are classified as “confirmed” per the CDC/CSTE case definition should be interviewed. The patient interview should ideally include the following components:

Certain populations and settings are associated with increased risk for rapid transmission of hepatitis A. Considerations when investigating hepatitis A cases among people experiencing homelessness, PWUD, people engaging in high-risk sexual practices, and people in correctional facilities are provided in Section 1.10.

All hepatitis A outbreaks should be reported to the appropriate local authorities for further investigation within the timeframe each jurisdiction has specified. The reporting timeframe to local authorities varies by jurisdiction. Notification to CDC is done through NNDSS and by contacting viralhepatitisoutbreak@cdc.gov, as indicated in CDC-RFA-PS21-2103. See Section 5.3 for guidance on reporting outbreak source to NNDSS.

Cases of hepatitis A should be reported to HDs as specified by state, territorial, and local regulations. Hepatitis A is a nationally notifiable condition (9). Hepatitis A cases are identified using an event code (Table 1-2).  Data are sent weekly or more frequently, depending on the infrastructure of the jurisdiction sending the data. Cases might be re-classified or removed as needed after the initial transmission to CDC, if the changes occur before surveillance data are finalized each year.