Lifestyle management programs like EnhanceFitness can help adults with arthritis get active and feel better. With CDC funds, the New York State Arthritis Program collaborated with local YMCAs to deliver EnhanceFitness to adults. Because of these efforts, the programexternal icon is available at 40 locations in 22 counties. 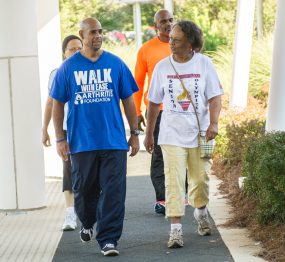 CDC works with national organizations and states to improve the quality of life for adults with arthritis. Since 2012, in collaboration with a variety of states and national partners, CDC has reached more than 200,000 adults with arthritis-appropriate evidence-based interventions that can improve arthritis management and quality of life. Through CDC-funded partnerships, these scientifically proven arthritis programs are available in all 50 states, the District of Columbia, and one territory—American Samoa.

Three of the national organizations that CDC funds—the YMCA of the USA (Y-USA), the National Recreation and Park Association (NRPA) and the University of North Carolina Osteoarthritis Action Alliance (OAAA)—make available CDC-recognized physical activity programs that have been proven to reduce pain and improve function, mood, and quality of life for adults with arthritis.

In addition to the national organizations’ activities, CDC previously funded 12 state health departments to disseminate and expand the reach of proven arthritis-appropriate self-management education (SME) programs as well as the physical activity programs. States worked with community organizations to make these programs part of their routine operations and sustain them over time. CDC currently funds 13 state programs, which build on lessons from the state health departments to expand lifestyle management programs through large access networks and existing systems. 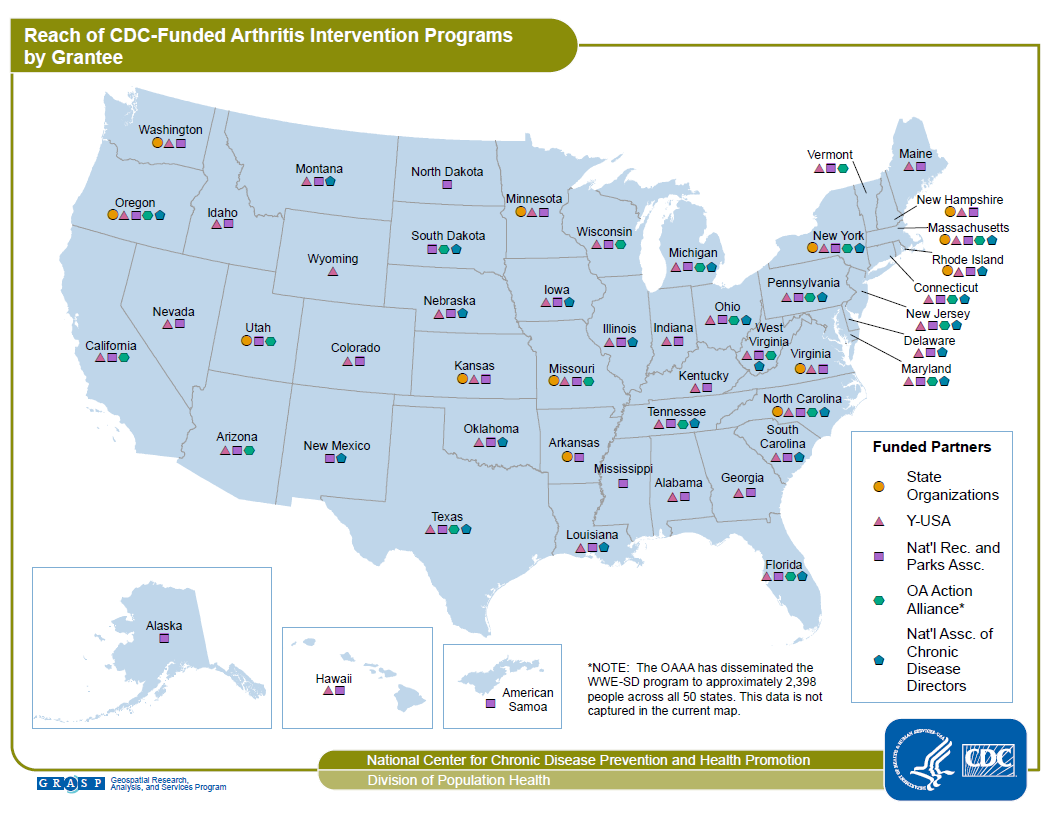 A text version of this map is available at https://www.cdc.gov/arthritis/about/text-version.html.

Michigan
Achieved the second highest participant reach numbers. Created sustainable partnerships to expand access to CDSMP and EnhanceFitness across the state, and to adults with disabilities in particular.

Pennsylvania
Established a statewide program locator and sustained a strong partnership with the Health Promotion Council which expanded access to Walk with Ease across the state.

Rhode Island
Fostered inclusion of AAEBIs in the state’s Community Health Network centralized program locator and bi-directional referral system for evidence-based programs throughout the state. Enhanced coordination and infrastructure for CDSMP statewide via Aging and other partners.

South Carolina
Successfully engaged the Federal Bureau of Prisons to implement CDSMP in all four federal correction institutions in the state, with potential for expansion throughout the federal prison system.

Utah
Collaborated with a major healthcare system, quality improvement organization, and local health departments to expand AAEBIs to rural and frontier counties in the state.