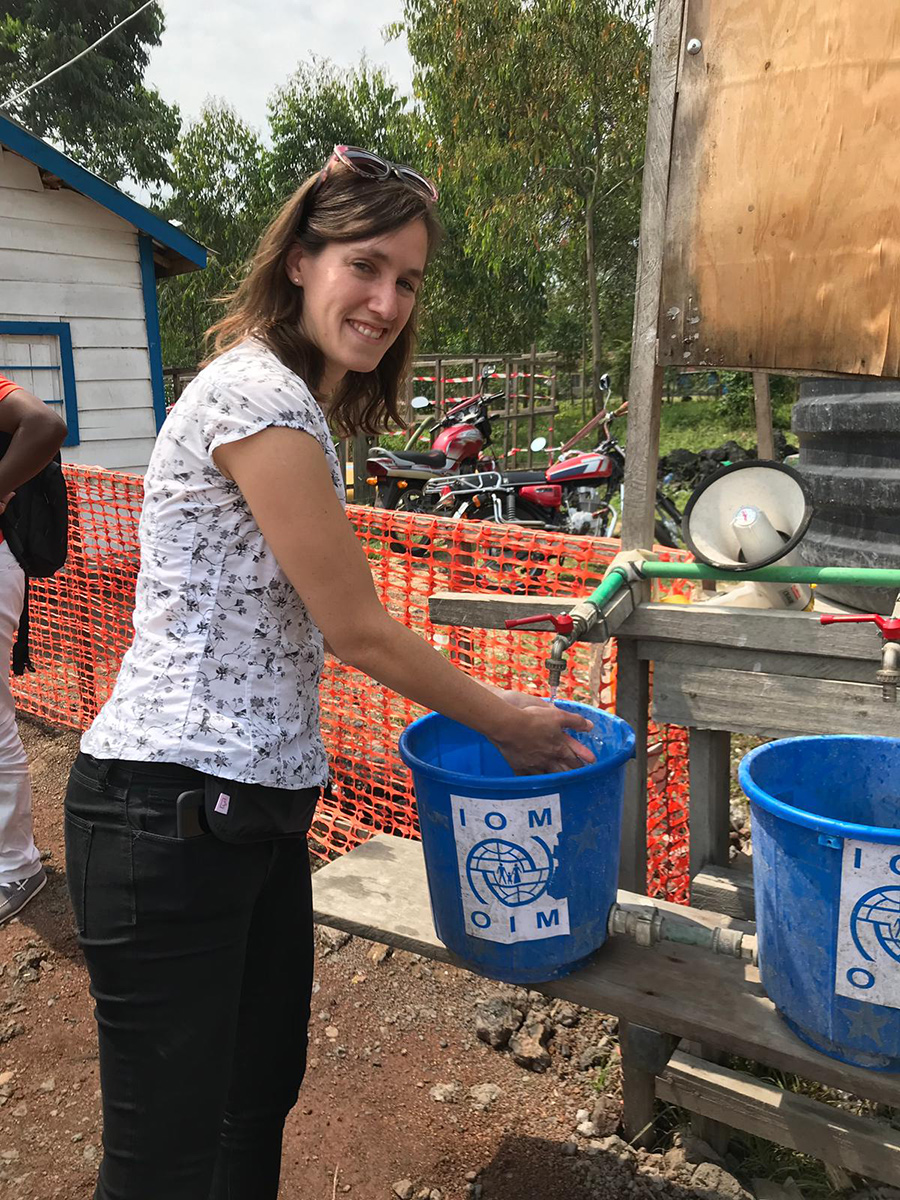 EIS officer Amy Heinzerling washes up at a screening station outside the eastern Congolese city of Goma during her deployment.

EIS officer Amy Heinzerling washes up at a screening station outside the eastern Congolese city of Goma during her deployment.

Stopping the spread of the Ebola outbreak in the Democratic Republic of the Congo (DRC) means keeping a close eye on the borders.

Travelers leaving the country are getting closer scrutiny because of the year-old epidemic. So are people traveling within the country and coming to unaffected cities from areas where the disease has taken hold.

This close watch kept Epidemic Intelligence Service (EIS) officer Amy Heinzerling busy during her recent deployment to the DRC’s eastern border city of Goma. She called her deployment “an incredible opportunity,” but also “humbling, as a lot of experiences are in public health.”

“There are so many pieces to the response, and you’re just one person who’s here for a month,” she says. “It can be hard to feel like you’re accomplishing something specific and measurable.” But building contacts and making small steps forward lays the groundwork for bigger improvements, “and that’s an important role in a response like this.”

Working with Congolese authorities and the International Organization for Migration, an arm of the United Nations, Heinzerling spent June working to improve screenings of travelers at ports of entry on the Rwandan and Ugandan borders with DRC, at Goma’s international airport, and at checkpoints leading into the city, home to about 2 million people.

At these checkpoints, screening staff are asking travelers to wash their hands in chlorinated water, observing them for signs of Ebola and measuring their temperatures with non-contact thermometers. Anyone who looks sick or is running a fever gets pulled aside for additional screening.

“They screen tens of thousands of these travelers every day at these checkpoints,” Heinzerling says.

Heinzerling learned French in her school district’s French immersion program. That skill proved useful for her deployment to the DRC, where French is the official language.

After finishing medical residency in 2018, she joined EIS, looking for ways to improve health at the population level.

“Sitting in the clinic seeing a patient, you can treat their asthma or their emphysema, but you may not be able to address the workplace or environment that caused their asthma or emphysema in the first place,” she says. “EIS was a good way to gain experience and learn more applied epidemiology and public health skills to effect more upstream change.”

Although her EIS position is based at the California Department of Public Health, where she focuses on environmental and occupational health issues, Heinzerling says she saw parallels between her work DRC and her everyday duties.

“It was definitely overwhelming, thinking I was going into this very serious outbreak without a lot of directly applicable experience,” she says. “But in the end, I felt like I had the skills I needed to do what I needed to do, with the support of people back in Atlanta and the team there. And I was able to build on these skills and gain new perspectives that will serve me well in public health work going forward.”