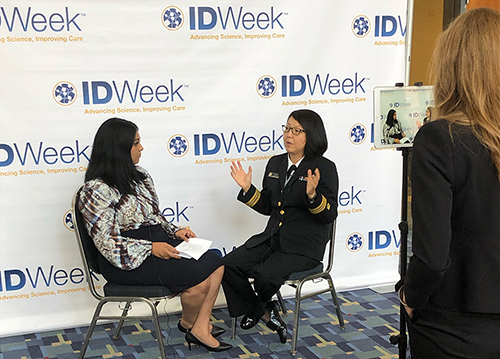 CDC Medical Officer Mary Choi, right, recounts some of her experiences in the current Ebola outbreak after a session at the October 2019 IDWeek conference in Washington.

CDC Medical Officer Mary Choi, right, recounts some of her experiences in the current Ebola outbreak after a session at the October 2019 IDWeek conference in Washington.

Mary Choi, MD, MPH got her first appreciation for public health in the mountains of Pakistan.

As a doctor at the last of the US Army’s MASH field hospitalsexternal icon, she shipped out to Pakistan in 2005 after an earthquake that killed more than 80,000 people.

“What I ended up seeing, because I was in charge of the emergency room, was diphtheria, meningitis, measles–a lot of these diseases that at that time we weren’t really seeing the U.S.,” said Choi. “We had a good public health foundation and structure in the U.S. that didn’t exist in Pakistan. And I began seeing the value of a strong public health structure.”

That experience eventually led her to CDC, where she’s now a medical officer and a lieutenant commander in the U.S. Public Health Service. And since the current Ebola outbreak emerged in the eastern area of the Democratic Republic of Congo in August 2018, Choi has deployed six times to DRC and WHO headquarters in Geneva.

She’s been the team lead in Goma, CDC’s field headquarters in eastern DRC, and helped develop a mobile app that can help trace contacts of people sick with Ebola by estimating when they might have been infected.

But despite fresh knowledge and advances in vaccination and drugs to treat the disease since the last major outbreak, she emphasizes that “There’s no silver bullet.”

In July 2019, when the first case of Ebola was detected in Goma, Congolese health authorities and the CDC team supporting them scrambled to make sure the disease wouldn’t spread. Choi came to the clinic where the patient was diagnosed and began to interview the workers who treated the patient.

Choi said that the responders came across a room full of contaminated gowns worn by the clinic workers. But that wasn’t all. “We found out that one of the technicians took home the gown he had worn when working with the confirmed patient, and the gown was actually in his house,” Choi said. And because the man lived in a house with multiple family members, “They were potential contacts depending on who had contact with that gown.”

“The devil really is in the details,” she said. “It’s important to interview everybody, interview them separately, and have them walk step-by-step through everything that happened.”

Choi was born in Seoul, South Korea, but grew up in the Chicago suburb of Skokie, Illinois. She went to medical school at George Washington University. After leaving the Army, she continued her studies and got a Master’s in Public Health from Columbia University. The program included three months working in Sierra Leone, where she met CDC staffers who encouraged her continued interest.

Then in 2012, Choi signed up for CDC’s Epidemic Intelligence Service. She volunteered for deployment in West Africa during the 2014-2016 Ebola outbreak and spent a month in Guinea, where she worked on infection control and helped set up a triage program at a clinic in the country’s northeast.

After her time in Guinea, she got another assignment to an unexpected destination: Texas.

In September 2014, a traveler who recently arrived from Liberia became sick and was the first case diagnosed in the United States. Soon, two nurses who had treated the patient also became sick and were diagnosed with Ebola. Choi soon landed in Dallas as part of a CDC team dispatched to help contain the disease.

“The fear and the tension were palpable,” she said. In addition to running tests and tracing contacts, CDC staff helped improve hospital safeguards and coach medical staffers on using personal protective equipment.

“One of us would watch people as they worked to make sure everything was OK,” Choi said. “We were there with them all the time and made it very clear our job was to protect them. I think we built a lot of camaraderie.”

And in the current epidemic, that kind of camaraderie helps Choi get through a deployment. Taking time to socialize with other people on your team “is important after a long day,” she said. “Other people work out. For me, it’s connecting with other people and making new friends.”

Lately, much of Choi’s work has concentrated on analyzing data about the epidemic and looking for ways to get ahead of the advancing numbers. But she added, “Behind all these numbers are real people.”

“When you hear things like, ‘I lost all the members of my family,’ or ‘Five children have died in our family,’ it’s devastating,” Choi said. “It’s a bad disease. It’s something I have experience working with, and I feel like I can contribute to try to stop this outbreak.”