“I’ve always been keenly aware of that. I always felt that identity with the country,” he says. “I had friends who went back, missionary children who were close friends of mine. We felt a kinship with each other for having been born there.”

The son of American missionaries, Gathany was born in a town near the sprawling DRC’s narrow Atlantic Ocean shoreline—a 25-mile stretch of beaches he calls “one of the most beautiful coastal areas I have ever seen.” He traces his interest in photography back to his father’s snapshots of their life in Africa, which he would display for church groups.

“I recognize photography as a way to capture moments in time and preserve them,” Gathany says. “I’ve always been fascinated by the concept of time and time as a continuum—it’s here, it’s gone, and there’s no way to reclaim it.”

His family returned to the United States amid the turmoil that followed Congolese independence from Belgium in 1960. After years of watching his parents present slide shows about their experiences to other missionary groups, he got his first professional camera as a teenager—an East German-made camera, purchased through what he called a “grey market” mail-order company. He majored in journalism at the University of Georgia and worked for newspapers around Atlanta before joining CDC in 1986.

Much of his work involves documenting research, but he’s also shot photos of suspicious packages during heightened fears of terrorism and captured the visits of dignitaries like Tshisekedi and Britain’s Prince Andrew. He’s captured one of the most distinctive images of one of the world’s worst pests and recorded the work of scientists handling some of the world’s deadliest pathogens inside CDC’s Biosafety Level 4 laboratories.

“Every day is an adventure here,” he says. “You come in here and you never know what you’ll be dealing with.”

In 2015, he was packing for Sierra Leone to document the response to the worst Ebola epidemic on record, the West African outbreak that killed more than 11,000 people between 2014 and 2016. It was to be his first return to the continent since his childhood—but at the last minute, the trip was canceled.

“It felt almost like a homecoming,” he says. “But because of health issues, I wasn’t able to go. I was very disappointed.”

While he’s not directly involved in the current response, his wife Nancy—also a CDC employee—has been in the fight, working on training and development programs through CDC’s Emergency Operations Center.

Gathany didn’t get introduced to Tshisekedi during his visit, during which the Congolese leader and his top advisers met with CDC Director Dr. Robert Redfield and other officials to discuss how to bring the Ebola epidemic to an end. But he says he has high hopes for Tshisekedi, who took office in January in the DRC’s first peaceful transition of power since independence.

“That’s my homeland,” Gathany says. “I’m hoping he’ll be what the country needs at this point, and I feel very strongly about that.”

More information on Jim’s photos can be found on CDC’s website. 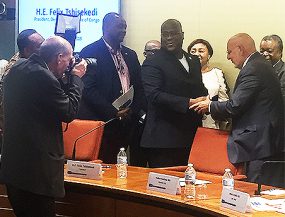 Jim Gathany snaps a photo of CDC Director Dr. Robert Redfield shaking hands with Felix Tshisekedi, the president of the Democratic Republic of the Congo. 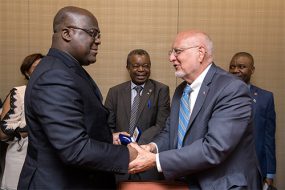