Amanda MacGurn: ‘It’s not over until it’s over’ 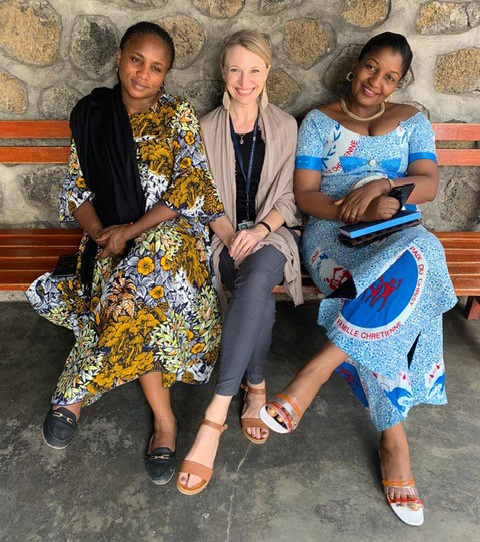 CDC’s Amanda MacGurn is flanked by Melia Loola, left, and Gloria Nazeka of the non-profit organization Internews while waiting for a meeting in Goma.

CDC’s Amanda MacGurn is flanked by Melia Loola, left, and Gloria Nazeka of the non-profit organization Internews while waiting for a meeting in Goma.

If you’re trying to keep a disease from spreading between countries, it’s hard to find a bigger challenge than Goma’s Petite Barrière.

Despite the “petite” name, tens of thousands of pedestrians a day pass through the border crossing that separates the Democratic Republic of the Congo (DRC) from Rwanda.

“It has very heavy traffic, and it’s very hard to control and implement screening there,” says Amanda MacGurn, a CDC communication specialist who has deployed to help fight the DRC’s ongoing Ebola outbreak more than a half-dozen times. “There are many traders and merchants who cross the border, some of them multiple times a day.”

Border health authorities from DRC and Rwanda implemented a systematic screening process to identify people with symptoms of Ebola or who had contact with someone who did. MacGurn advised authorities on how to organize the screening process, what forms to use, and how to take travelers’ temperatures with non-contact thermometers. They also set up handwashing stations on each side of the border.

The precautions were put to the test in the summer of 2019, when the first case of Ebola was confirmed in Goma, the headquarters of the international outbreak response, in a traveler from a rural area of DRC. CDC responders and their partners responded by working closely with the Ministry of Health and partners to bolster a variety of safeguards, including tightening screening at checkpoints on the roads, at Goma’s airport and at border crossings like the Petite Barrière. MacGurn also began working with local-level communication staff to help ensure information about the local outbreak was reaching people who could be affected.

“This was an example of where we were able to provide some of that boots-on-the-ground assistance,” MacGurn says. “I was able to work with the local-level response to put in place a risk communication process to get information out to the community on a daily basis.”

MacGurn helped produce a template for local health authorities to tell people what authorities knew—or didn’t know—about the disease, what was being done to combat it, what they could do to help, and where they could find accurate information. The quickly coordinated response limited the spread of Ebola to four cases in the city, which has a population of about 1 million.

By March 2020, the number of new cases reported had plunged from more than 90 a week to zero. But the outbreak can’t be declared over until DRC goes 42 days from the second negative test of the last patient without a case. Then six months of Ebola surveillance is needed to quickly detect any cases that may pop up.

“It’s not over ‘til it’s over,” MacGurn says. “We should continue to expect to see little flare-ups as we have seen in previous outbreaks. Now is not the time to let down our guard or disengage.”

MacGurn grew up in Bend, Oregon, on the edge of the Cascade mountain range. Her initial career path wasn’t in public health, but language – she studied French as an undergraduate. But the field caught her attention during an internship as a translator for the humanitarian relief group Médecins Sans Frontières (Doctors Without Borders) in France.

“That was my first introduction to public health,” she says. After a two-year stint in the Peace Corps, teaching English to students in Romania’s Transylvania region, she enrolled in a master’s program in public health at Emory University in Atlanta. After a graduate fellowship at the CDC, she joined the agency full-time in 2014, working on border health.

“And two days after I started, we were activated for the 2014 Ebola outbreak,” MacGurn says. “Two months later, I was out the door to Guinea, because I spoke French. It was a trial by fire, and a very exciting start at CDC.”

MacGurn is now an old hand at field work in Africa. In addition to Guinea—one of three countries hit hardest during the 2014-2016 Ebola outbreak—she has worked in Togo, Benin, Senegal, Mali, Mauritania, and Ghana to bolster those countries’ border health practices to defend against infectious disease outbreaks. She also worked to fight an earlier Ebola outbreak in DRC and an outbreak of plague in Madagascar.

“I wish I had known before I went [to Guinea] the first time that I didn’t have to know everything, that being there and being flexible and having a good attitude were things that would serve me the most,” she says.

The current response has had its ups and downs, especially since the disease is largely in rural areas where armed groups make the area unsafe for responders and CDC teams have limited access. But on tough days, she says, she and her colleagues pulled together to support each other.

“We were like a family out there,” MacGurn says. “We relied on each other and support each other and work closely together. That makes a big difference.”