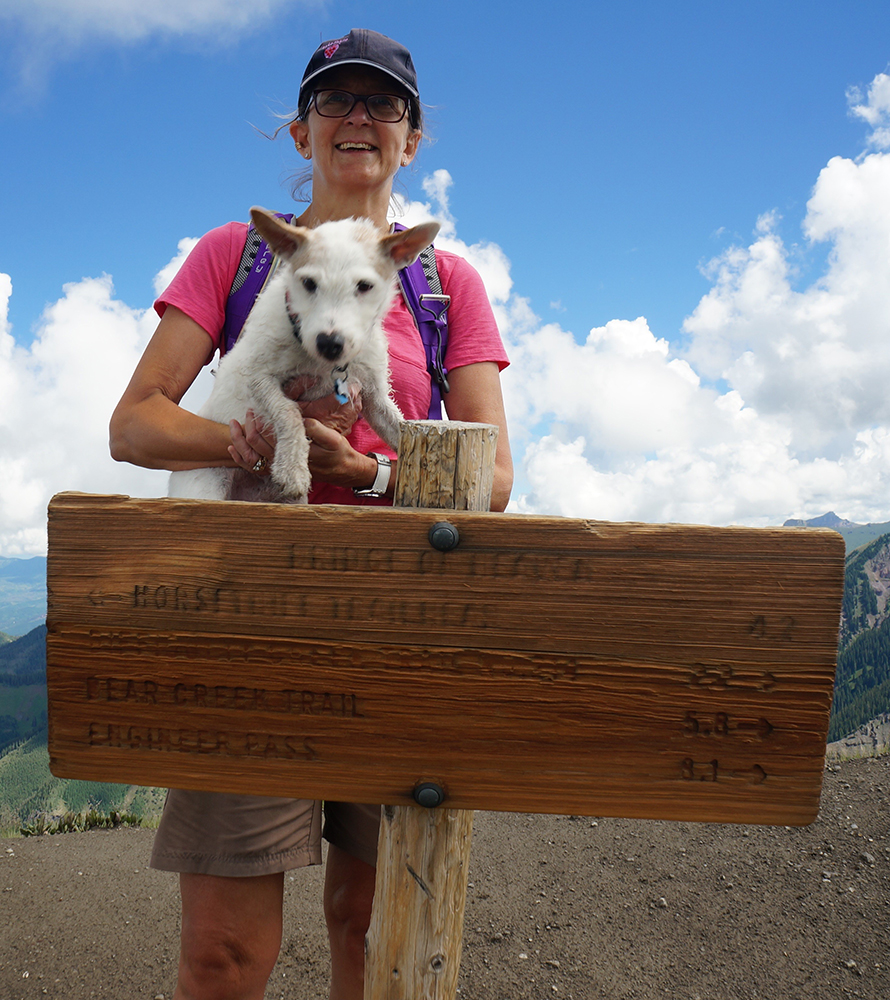 Dr. Damon with her dog Brutus, on the “Bridge of Heaven” hike in Ouray, Colorado

Dr. Damon with her dog Brutus, on the “Bridge of Heaven” hike in Ouray, Colorado

Not All Heroes Wear Capes

We often joke that the most difficult calls always come into CDC on Friday afternoons, but sometimes, the life-changing calls come in during vacation. Dr. Inger Damon was newly official in her role as director of the Division of High-Consequence Pathogens and Pathology and taking a quick vacation in her family cabin in Colorado when she got “the call” from CDC leadership in 2014. An Ebola epidemic in West Africa was surging to global prominence and required a strong CDC leader at the helm. The outbreak was requiring scientists to rethink everything we knew about Ebola—and for Dr. Damon, it required a reimagining of the job she’d just signed on for, as leader for the division that specializes in Ebola and other hemorrhagic pathogens.

The task at hand was daunting: managing CDC’s response to the spiraling, deadly outbreak in an area of the world where it had never before been confirmed. Dr. Damon took the helm of CDC’s response for over eight months starting in late July 2014, with her signature scientific attention to detail and calm perseverance, guiding what was at the time the most resource-intensive outbreak response in CDC’s history. And it wasn’t just a global response that was needed: for the first time ever, in September 2014, Ebola was introduced to the United States by an infected traveler, illustrating why an outbreak anywhere can mean an outbreak everywhere. After two long years and tremendous efforts by the thousands involved in Liberia, Guinea, and Sierra Leone, the West Africa Ebola outbreak was finally declared over in all countries by June 2016. But more challenges were ahead, and Dr. Damon’s leadership would soon be needed again.

Fast forward a couple of years to 2018, when three Ebola outbreaks would occur back-to-back-to-back on opposite sides of the Democratic Republic of the Congo (DRC), with almost seamless shifting of response needs from one area to another. First, in spring 2018 Ebola emerged in the Equateur province in northwestern DRC. Just as that outbreak resolved, the second outbreak in the North Kivu and Ituri Provinces of eastern DRC was announced in August 2018, causing new challenges for CDC responders given the complex political and often tumultuous security conditions that have troubled this region of DRC for decades. And just as the outbreak was nearly over in eastern DRC, Ebola was reported again in Equateur province on June 1 this year, with evidence suggesting a new introduction of virus unlinked to the 2018 outbreak. For each of these responses, Dr. Damon has played  different yet critical roles while co-leading efforts across the agency with Dr. Ray Arthur from CDC’s Center for Global Health.

The People Make the Difference

When asked what the most rewarding part about this work is, Dr. Damon has no hesitation: it’s all about the people. From those in the affected countries who stand to benefit from knowledge about how to protect themselves, to collaborating partners, and CDC staff who work on the response— the people involved make the hard work possible and worthwhile. She notes that fresh perspectives and new questions help to identify what we don’t know, and that finding common goals shared by response partners is necessary to bringing an outbreak to its end.

The relationships and trust built with partners are an asset in a complex outbreak response, and Dr. Damon highlights how the trust built with the DRC government and scientists over many years has allowed CDC to help inform decision-making about response strategies. Drawing upon the experiences of those who know and understand the cultural context where the outbreak is occurring has also been critical in helping CDC and partners provide meaningful support. Dr. Damon recalls a memorable day when she was in DRC in July 2019, talking to an old Congolese colleague of hers. “His family came from Beni and Butembo. Getting insights from him on his impressions of community concerns and the history in that area as we were seeing Beni and Butembo spiral out of control [from Ebola]— the ethnic tensions, histories of governments, relationships with those communities and with central governments…” His insights provided invaluable perspective as CDC worked to understand the “why”—the drivers— of this particular outbreak. 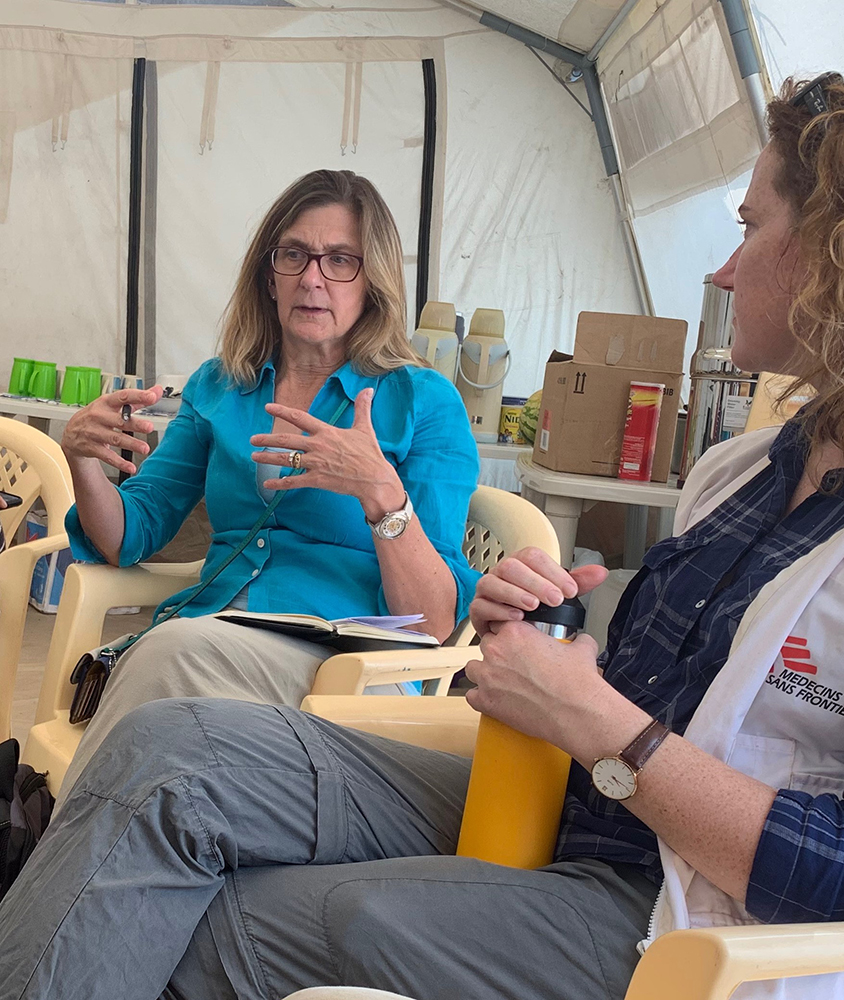 The 2018 eastern DRC Ebola outbreak posed particularly unique challenges for CDC and the response community. Dr. Damon described how the “typical boots-on-the-ground” approach of CDC staff was harder to operationalize in this response due to security constraints. “We instead had to use our experience and practical knowledge to help shape planning and policies,” she noted, giving the example of leveraging partnerships from prior outbreaks to try to influence decisions.

Compared with the 2014 West Africa Ebola outbreak, the outbreaks in DRC have benefited from more developed and expanding lab capacity, an effective investigational vaccine, and lessons learned from prior outbreaks such as how to rapidly set up Ebola Treatment Centers and training staff. However, there have been new and more challenging impediments to contact tracing efforts in eastern DRC, due to a number of factors, including fear and mistrust, local militia activity, challenges with messaging, and population movement.

While the number of cases currently associated with the three DRC outbreaks during the last 2 years pales in comparison to the scale of the 2014 West Africa outbreak, these numbers and duration are still unprecedented for DRC. The eastern outbreak represents the largest Ebola outbreak by far the country has experienced, and the second largest ever in the world. Dr. Damon added, “The geographic spread was really dramatic—like a wildfire. The smolder and the burn.”

As of mid-June, the eastern DRC Ebola outbreak was on track to be declared over in late June 2020, pending the report of any new cases. The region is on high alert for “flare-ups,” as occurred in April 2019 associated with spread likely from an Ebola survivor; similar “flare-ups” also occurred in West Africa. With the Ebola outbreak in Equateur that began June 1 and the COVID-19 pandemic simultaneously exacting tolls in DRC, the country has grown weary of intensive outbreak response efforts.

Dr. Damon will continue to provide critical leadership as response efforts shift and adapt to the circumstances around the waning and burgeoning Ebola outbreaks, each presenting unique challenges and requiring thoughtful strategies. Fortunately, her historical experience with outbreaks, including knowledge of who has done what over time, what approaches have and haven’t worked, and ability to anticipate needs are just a few of the assets she brings to the work that lies ahead.

A Day in the (Non-Outbreak Response) Life

When she’s not wearing different outbreak response hats, Dr. Damon brings the same cool focus to her job as the Division Director of the Division of High-Consequence Pathogens and Pathology, where she oversees five branches and one office. She is an early riser and a coffee-drinker; a runner and a swimmer; a wife and a dog mom to a 14-year old Jack Russell terrier named Brutus. She and her husband love spending time in Colorado, where she claims to be a “conservative” skier on the Colorado slopes. In her limited downtime, Dr. Damon also enjoys reading and catching up on TV shows; Watchmen has been a recent favorite. She is contemplating joining the Imogene Pass Run in September 2020—a 17-mile race in Colorado—which has been a “glint in the eye” since 2014, but delayed due to Ebola response work. With any luck, a mountain race and some well-deserved rest will be in her future. Either way, CDC will continue to benefit from her wisdom and leadership on the road ahead.