Supporting the Laboratory in Uganda 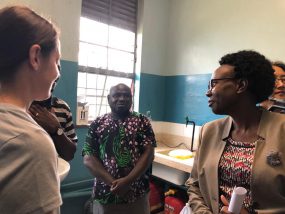 Amy Schuh, a laboratory scientist at CDC, is no stranger to being deployed, so when the opportunity arose for her to go to Uganda a second time to support the Ebola outbreak, she jumped at the chance because working in the field is one of her favorite things.

Working closely with staff from the Uganda Virus Research Institute (UVRI), Amy spent her days working in a makeshift 12’ x 12’ laboratory set up in Bwera Hospital in the Kasese District of Uganda near the border with Democratic Republic of Congo. Every day she drove an hour from her hotel to the lab, where she and Jackson Kyondo, a colleague from UVRI tested samples from patients with suspect cases of Ebola and reported the results to physicians and Ugandan health officials. While the days were long, the work was rewarding. “When doing lab work at CDC, we often don’t see how much it affects people, but there we were able to report out results in three hours to individuals waiting anxiously,” Amy said.

When she first arrived in Uganda, she faced some electrical challenges while trying to get the Ebola lab up and running. “Some of our field equipment can be run on a generator; but we needed an uninterruptable power supply for a particular piece of equipment,” Amy explained. “Luckily the electrician from the hospital was able to connect us to the hospital laboratory’s uninterruptable power supply, until the CDC was able to order a power supply.”

Once the lab was up and running, the work done in the pop-up lab did not go unnoticed. For example, during an otherwise routine day, Amy and Jackson were surprised by a visit from the Ugandan Minister of Health and the WHO Regional Director of Africa, who were there to assess the Ebola response after three imported cases were detected in Uganda. A large crowd of television reporters and cameras were with them. Amy and Jackson had the opportunity to explain the work they were doing.

If given the opportunity, Amy would deploy again. “By deploying, I get to challenge myself, expand my knowledge, and learn from challenges. Being able to apply my skills to a population in critical need of those skills is something special.”