Quit Smoking for Good – You Got This

Not sure where to start when it comes to quitting smoking? Have you tried quitting before but couldn’t do it on your own? Don’t worry. You got this! You can do it and CDC is here to help.

Everyone deserves a fair and just opportunity to live a healthy life, but certain policies, practices, and social or environmental conditions have led to some groups experiencing differences in health or health outcomes. This includes differences in tobacco product use, secondhand smoke exposure, and access to resources that help people quit using tobacco products.

Smoking remains the single largest preventable cause of death and illness in the world and causes over 8 million deaths per year worldwide. In addition, more than 16 million Americans live with a smoking-related disease. While these facts seem daunting, you can still make this your time to quit smoking.

Let the American Cancer Society’sexternal icon Great American Smokeoutexternal icon event on November 18 inspire you to start your journey toward a smokefree life. No matter how old you are or how long you’ve been smoking, there are many benefits to quitting.  For example, soon after you quit, your heart rate decreases and the nicotine level in your blood drops to zero. Within a couple of months, your coughing and shortness of breath decreases. In 1 to 2 years, your risk of a heart attack drops sharply. And the list of benefits goes on and on. 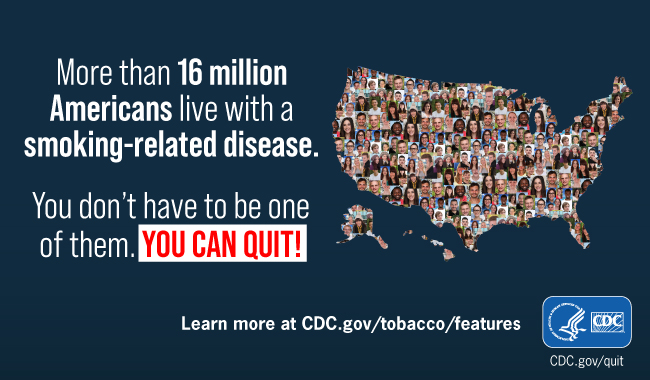 Quitting May Be Harder For Some

Some groups of people may have a harder time quitting smoking than others. Although cigarette smoking has declined significantly since 1964, unfair and unjust practices and conditions have led to longstanding disparities in tobacco product use across groups defined by race, ethnicity, educational level, sexual orientation, socioeconomic status, and geographic region. Cigarette smoking may be higher among these groups, like LGBT people and American Indian/Alaska Native people. These communities may face more challenges when trying to quit. However, many free resources are available. It’s important to keep trying and not give up! You got this!

Roosevelt had a heart attack at age 45 that landed him the hospital for a month. To repair the damage to his heart caused by smoking, doctors inserted stents into his heart. When that wasn’t enough, he had bypass surgery—six bypasses in all.

Roosevelt had to give up his career as a commercial plumber because his heart was no longer strong enough for the strenuous activity such work requires.

He says the love, support—and constant nagging—of his family was the key to him being able to quit smoking. “If you have loved ones who care about you, they will support you. Take it one day at a time,” Roosevelt says. “But if you smoke and want to see your kids graduate and want to see your grandkids someday, stop smoking.”

Roosevelt hopes his participation in the Tips® campaign can help save lives. “I wish I never smoked,” he says. “Everybody thinks [health problems] won’t happen to them, but they happen to so many people. You could be next.”

Roosevelt talks about how hard it is to quit smoking and says that people often lie to themselves about the effects of smoking cigarettes. He emphasizes that it’s important to try to stop smoking, both for yourself and for your loved ones.

You can quit smoking. Medicine can help. 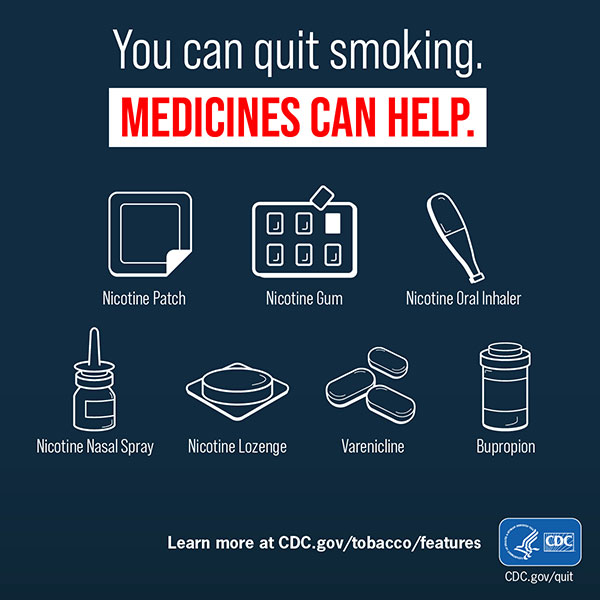 Some people need more support to quit smoking than others, and that’s okay. Quit-smoking medicines can make quitting less painful and can more than double your chance of successfully quitting.

Seven FDA-approved medicines are proven to help adults quit smoking: nicotine patch, lozenge, gum, oral inhaler, nasal spray, and two pill medicines, varenicline and bupropion. Some medicines are prescribed by your doctor, and others you can get over the counter at a pharmacy.

These quit-smoking medicines all work in different ways. They are safe and effective for adults who smoke cigarettes. Read more to find out Which Quit Smoking Medicine is Right for You?.

How to Use Quit-Smoking Medicines

Before using any quit-smoking medicine, always read the label first and follow any instructions you receive from your doctor or other health care provider. If you have questions or concerns, speak with your health care provider or a pharmacist. Read more to find out How to Use Quit Smoking Medicines.

Remember to keep working at your quit journey and use quit-smoking medicines if you think they will help you. Make the American Cancer Society’s Great American Smokeout the event to help you finally quit for good!