The Centers for Disease Control and Prevention (CDC) is supporting the U.S. Department of Housing and Urban Development (HUD) in its effort to protect residents and staff working and living in federally owned and operated public housing units from the dangers of secondhand smoke exposure.

HUD’s Smokefree Rule: What You Need to Know

On December 5, 2016, HUD published its final rule 1 in the Federal Register requiring each Public Housing Agency (PHA) administering low-income, conventional public housing to initiate a smokefree policy. The rule, which became effective on February 3, 2017, provided an 18-month implementation period after which all PHAs must have a smokefree policy in place, by no later than July 31, 2018. This smokefree policy prohibits lit tobacco products (cigarettes, cigars or pipes) in all living units, indoor common areas, and administrative offices and extends to all outdoor areas within 25 feet of housing and administrative office buildings. The rule improves indoor air quality in the housing; benefits the health of public housing residents, visitors, and PHA staff; reduces the risk of catastrophic fires; and lowers overall maintenance costs.

Since 2009, HUD has strongly encouraged PHAs to adopt smokefree policies covering living units and common areas, a policy many private housing developments already have in place, and more than 600 PHAs and Tribally Designated Housing Entities (TDHEs) adopted at least partial smokefree policies. Through this voluntary effort and local initiatives, more than 228,000 public housing units became smokefree. Once fully implemented, the HUD smokefree rule will expand the impact to more than 1.8 million public housing residents, including more than 500,000 units inhabited by elderly residents. Importantly, the rule will protect the nearly 680,000 children living in public housing.2

What is Secondhand Smoke and How is it Harmful?

Secondhand smoke is smoke from burning tobacco products or smoke that has been exhaled by a person smoking.3 Tobacco smoke contains more than 7,000 chemicals, including hundreds that are toxic and about 70 that can cause cancer. Exposure to secondhand smoke causes disease and premature death among nonsmokers.3 There is no risk-free level of secondhand smoke. The U.S. Surgeon General has warned that breathing secondhand smoke for even a short time is dangerous.4

How Does Smokefree Housing Benefit Housing Managers and Protect Residents?

There are proven benefits of smokefree housing for landlords, managers and their residents. These benefits include:

CDC and its partners have secondhand smoke information and quit smoking resources, including some specific to smokefree housing. The following resources can help you as you implement your smokefree policies. 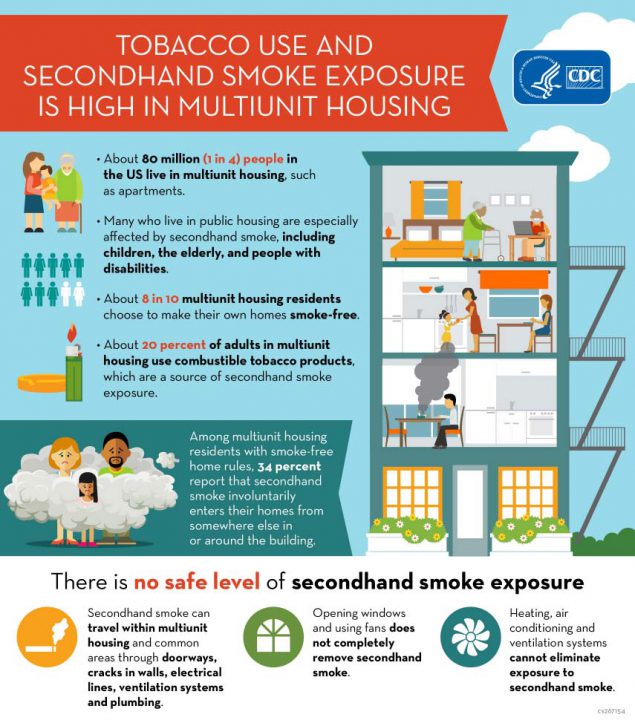