Biologic characteristics present from birth can protect against certain types of malaria. Two genetic factors, both associated with human red blood cells, have been shown to be epidemiologically important. Persons who have the sickle cell trait (heterozygotes for the abnormal hemoglobin gene HbS) are relatively protected against P. falciparum malaria and thus enjoy a biologic advantage. Because P. falciparum malaria has been a leading cause of death in Africa since remote times, the sickle cell trait is now more frequently found in Africa and in persons of African ancestry than in other population groups. In general, the prevalence of hemoglobin-related disorders and other blood cell dyscrasias, such as Hemoglobin C, the thalassemias and G6PD deficiency, are more prevalent in malaria endemic areas and are thought to provide protection from malarial disease.

Persons who are negative for the Duffy blood group have red blood cells that are resistant to infection by P. vivax. Since the majority of Africans are Duffy negative, P. vivax is rare in Africa south of the Sahara, especially West Africa. In that area, the niche of P. vivax has been taken over by P. ovale, a very similar parasite that does infect Duffy-negative persons.

Other genetic factors related to red blood cells also influence malaria, but to a lesser extent. Various genetic determinants (such as the “HLA complex,” which plays a role in control of immune responses) may equally influence an individual’s risk of developing severe malaria.

More on: Sickle Cell and Malaria

Acquired immunity greatly influences how malaria affects an individual and a community. After repeated attacks of malaria a person may develop a partially protective immunity. Such “semi-immune” persons often can still be infected by malaria parasites but may not develop severe disease, and, in fact, frequently lack any typical malaria symptoms.

In areas with high P. falciparum transmission (most of Africa south of the Sahara), newborns will be protected during the first few months of life presumably by maternal antibodies transferred to them through the placenta. As these antibodies decrease with time, these young children become vulnerable to disease and death by malaria. If they survive repeated infections to an older age (2-5 years) they will have reached a protective semi-immune status. Thus in high transmission areas, young children are a major risk group and are targeted preferentially by malaria control interventions.

In areas with lower transmission (such as Asia and Latin America), infections are less frequent and a larger proportion of the older children and adults have no protective immunity. In such areas, malaria disease can be found in all age groups, and epidemics can occur.

Anemia in young children in Asembo Bay, a highly endemic area in western Kenya. Anemia occurs most between the ages of 6 and 24 months. After 24 months, it decreases because the children have built up their acquired immunity against malaria (and its consequence, anemia). 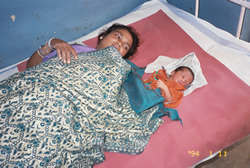 Mother and her newborn in Jabalpur Hospital, State of Madhya Pradesh, India. The mother had malaria, with infection of the placenta.

Pregnancy decreases immunity against many infectious diseases. Women who have developed protective immunity against P. falciparum tend to lose this protection when they become pregnant (especially during the first and second pregnancies). Malaria during pregnancy is harmful not only to the mothers but also to the unborn children. The latter are at greater risk of being delivered prematurely or with low birth weight, with consequently decreased chances of survival during the early months of life. For this reason pregnant women are also targeted (in addition to young children) for protection by malaria control programs in endemic countries.

More on: Malaria During Pregnancy

Human behavior, often dictated by social and economic reasons, can influence the risk of malaria for individuals and communities. For example:

Human behavior in endemic countries also determines in part how successful malaria control activities will be in their efforts to decrease transmission. The governments of malaria-endemic countries often lack financial resources. As a consequence, health workers in the public sector are often underpaid and overworked. They lack equipment, drugs, training, and supervision. The local populations are aware of such situations when they occur, and cease relying on the public sector health facilities. Conversely, the private sector suffers from its own problems. Regulatory measures often do not exist or are not enforced. This encourages private consultations by unlicensed, costly health providers, and the anarchic prescription and sale of drugs (some of which are counterfeit products). Correcting this situation is a tremendous challenge that must be addressed if malaria control and ultimately elimination is to be successful.