Malaria vaccines have been in development since the 1960’s, with substantial progress in the last decade. October 6, 2021, marks an historic day in the development of malaria vaccines, with release of the World Health Organization (WHO) recommendation for widespread use of the RTS,S/AS01 (RTS,S) malaria vaccine among children living in sub-Saharan Africa and other regions with moderate to high P. falciparum malaria transmission.

Barriers to Developing a Malaria Vaccine

The development of a malaria vaccine has faced several obstacles: the lack of a traditional market, few developers, and the technical complexity of developing any vaccine against a parasite.

Malaria parasites have a complex life cycle, and there is poor understanding of the complex immune response to malaria infection. Malaria parasites are also genetically complex, producing thousands of potential antigens. Unlike the diseases for which we currently have effective vaccines, exposure to malaria parasites does not confer lifelong protection. Acquired immunity only partially protects against future disease, and in many cases people still become infected with the parasite; malaria infection can persist for months without symptoms of disease.

More than a dozen vaccine candidates are now in clinical development, and one, GlaxoSmithKline Biologicals’ RTS,S/AS01, completed Phase III clinical testing, and on October 6, 2021, following a large scale pilot implementation, became the first malaria vaccine to receive a WHO recommendation for widespread use among children living in areas of moderate to high malaria transmission. 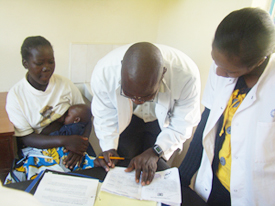 The vaccine has been in development since the mid-1980s and has advanced thanks to a unique public-private partnership of GSKBio, the PATH Malaria Vaccine Initiative, and African and other research organizations, with funding support from the Bill and Melinda Gates Foundation.

From 2009–2011, children ages 6–12 weeks and 5–17 months were enrolled in the trial at 11 sites in seven African countries. CDC, in collaboration with the Kenya Medical Research Institute, led the trial at one site in western Kenya.

The trial’s final results, made available in 2015external icon, were a promising advance in development of a malaria vaccine for African children. The RTS,S vaccine reduced clinical and severe cases of malaria by about one-third in 5–17-month-old children over four years who received the three-dose vaccine series plus a booster dose. The vaccine was less effective in children in the young infant group. The vaccine was generally found to be safe, but there were a few safety signals that warranted further study, including febrile convulsions, meningitis, and cerebral malaria.

Notably, the vaccine provided this protection in settings with ongoing use of other effective malaria prevention and treatment interventions: bed nets, antimalarial drugs for disease treatment, indoor residual insecticide spraying to prevent mosquito-borne transmission, and drugs to protect pregnant women and their newborns from malaria’s adverse effects.

While the pilots are still on-going until 2023, sufficient data on safety and efficacy have been collected to allow for a broader recommendation for the use of the vaccine to take place.

Next steps include funding decisions from the global health community for broader rollout, and country decision-making on whether to adopt the vaccine as part of national malaria control strategies.Further research into ways to maximize efficacy of the RTS,S/AS01 vaccine, including assessing alternative dosing schedules such as a fractionated third dose, is underway. CDC is leading one of these studies, in collaboration with KEMRI, in infants in western Kenya.

Another promising malaria vaccine candidate includes whole sporozoites, the sexual form of the parasite extracted from mosquito salivary glands, which have either been made non-infectious through irradiation or are administered along with chemoprophylaxis. Recent trials have shown that the irradiated whole sporozoite PfSPZ Vaccine made by Sanaria® is safe and well tolerated and had promising protection against malaria when administered intravenously. A collaborative CDC and KEMRI trial in western Kenya has shown that the PfSPZ Vaccine is safe and well tolerated in infants and young children. Unfortunately, the vaccine did not provide significant protection against P. falciparum infection at 6 months, precluding further evaluation in this age groupexternal icon, although other studies are currently evaluating the efficacy of the PfSPZ Vaccine in different populations in Mali, Gabon, Tanzania, and Equatorial Guinea. This study did, however, provide important information on the immune response to the vaccine; this information will aid researchers in developing a more effective vaccine for young children. 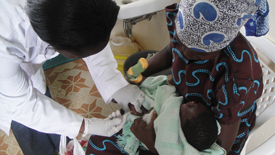 The roadmap includes the following strategic goals for malaria vaccines by 2030: