CDC Activities in the Mekong Region 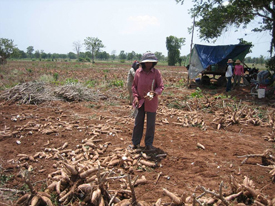 Female migrant workers in Komrieng District, Battambang Province, Cambodia. They sleep under the plastic sheet (background), keep their belongings under it, and use it as shelter from the rain. Agricultural workers in this area are at especially high risk for malaria. (Courtesy Malaria Consortium)

Although considerable progress has been made in malaria control in the Greater Mekong Subregion (GMS) during the past 10 years, malaria remains a major concern for the international community and ministries of health in the region. This is due primarily to the development and possible spread of resistance to artemisinin drugs, the principal component of the combination therapies for malaria that now are the first-line treatment for malaria throughout the GMS and the world. Plasmodium falciparum resistance to artemisinin drugs was first confirmed in western Cambodia; treatment failures to artemisinin-based combination therapy (ACT) have been reported from multiple sites on the Thai-Cambodian border; and an early warning sign of artemisinin resistance – prolongation of parasite clearance times – has been reported throughout the region.

CDC co-implements the U.S. President’s Malaria Initiative (PMI) program led by USAID in the GMS. PMI’s support for malaria programs in the GMS differs from its support to countries in Africa both in its regional focus and its primary goal of responding to artemisinin resistance. While PMI’s initial efforts in the subregion were targeted at specific border areas between Burma, Cambodia, and Thailand, PMI has shifted its approach to support regional elimination of P. falciparum, recognizing that this is the best and most sustainable approach to addressing multidrug resistance. PMI-supported activities include both regional/cross-cutting activities, such as surveillance for antimalarial drug resistance and regional capacity building, as well as targeted malaria control and elimination activities in Burma and Cambodia, the two countries with the highest burden of malaria in the region. CDC has been leading PMI-funded operational research in the region which has focused on evaluating more sensitive diagnostics for elimination, safety of low-dose primaquine to limit falciparum transmission, and novel point-of-care diagnostics for glucose-6-phosphate dehydrogenase to guide radical cure of vivax malaria.

For more information on PMI activities in Burma, Cambodia, and the Mekong Regional, see www.pmi.govExternal.