Use of Antimalarials to Reduce Malaria Transmission

A number of strategies use antimalarial drugs to reduce transmission by clearing the affected population of malaria parasites. The best known of these is mass drug administration (MDA). MDA has been implemented in the past as part of attempts to eliminate malaria from an area and to respond to malaria epidemics caused by P. falciparum, the most lethal of the malaria parasites, and P. vivax. MDA and related strategies that deploy antimalarials to reduce malaria transmission are described below. 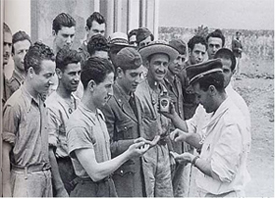 Distribution of antimalarials in Italy in the 1930s. Attempts to control malaria through mass treatment with antimalarial drugs date back to at least the early 1930s. (Source: Archivio Casini, Sezione di storia della medicina, University of Rome 'La Sapienza')

Mass drug administration (MDA) is the administration of antimalarial treatment to every member of a defined population or every person living in a defined geographical area (except those for whom the medicine in contraindicated) at approximately the same time and often at repeated intervals.

The World Health Organization currently recommends MDA for malaria in the following settings:

WHO concluded in 2016 that there is insufficient evidence to provide guidance on use of MDA in settings with moderate or high transmission. Recent studies conducted in high and moderate transmission settings of Zambia and Myanmar, respectively, showed no difference in Zambia and only early impact in Myanmar.

Mass screening and treatment (MSAT) refers to screening all people in a population with an appropriate malaria diagnostic test and providing treatment to those with a positive test result. This intervention is based on the assumption that most of the people who can serve to infect mosquitoes will have high enough levels of parasites or antigen in their blood to be detected at the time of screening. Focal screen and treat (FSaT) is a variation of an MSaT performed in a smaller geographic area, such as a household, village, or hot spot.

WHO does not currently recommend MSAT and FSAT as suitable interventions to reduce malaria transmission using current diagnostic tests.

Mass fever treatment (MFT), like MDA, refers to the treatment of malaria with a curative dose of an antimalarial drug within a well-defined population without testing, but unlike MDA, only persons with a fever are treated. MFT is a rapid measure that can be considered as part of an outbreak response. The criteria for choosing an antimalarial drug for MFT are the same as for the national policy for treating uncomplicated malaria (most likely an artemisinin-based combination therapy [ACT]). WHO states that mass treatment of fever cases with an ACT is appropriate as a strategy to reduce mortality once malaria has been established as the cause of the epidemic. This strategy aims to get treatment to people with probable malaria cases as quickly as possible to cure illness, avert death, and help contain the epidemic. After the outbreak response is more fully implemented in the community, laboratory confirmation of malaria parasites will precede treatment.