Insecticide-treated bed nets (ITNs) are a form of personal protection that has been shown to reduce malaria illness, severe disease, and death due to malaria in endemic regions. In community-wide trials in several African settings, ITNs were shown to reduce the death of children under 5 years from all causes by about 20%.

How Do ITNs Work?

Bed nets form a protective barrier around people sleeping under them. However, bed nets treated with an insecticide are much more protective than untreated nets.

The insecticides that are used for treating bed nets kill mosquitoes, as well as other insects. The insecticides also repel mosquitoes, reducing the number that enter the house and attempt to feed on people inside. In addition, if high community coverage is achieved, the numbers of mosquitoes, as well as their length of life will be reduced. When this happens, all members of the community are protected, regardless of whether or not they are using a bed net. To achieve such effects, more than half of the people in a community must use an ITN. 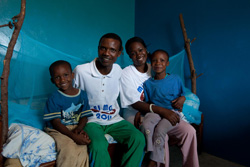 Nets may vary by size, shape, color, material, and/or insecticide treatment status. Most nets are made of polyester, polyethylene, or polypropylene.

Only two insecticides classes are approved for use on ITNs (pyrroles and pyrethroids). These insecticides have been shown to pose very low health risks to humans and other mammals, but are toxic to insects and kill them. Previously, nets had to be retreated every 6 to 12 months, or even more frequently if the nets were washed. Nets were retreated by simply dipping them in a mixture of water and insecticide and allowing them to dry in a shady place. The need for frequent retreatment was a major barrier to widespread use of ITNs in endemic countries. In addition, the additional cost of the insecticide and the lack of understanding its importance resulted in very low retreatment rates in most African countries.

Several companies have developed long-lasting insecticide-treated nets (LLINs) that maintain effective levels of insecticide for at least 3 years, even after repeated washing. The WHO Pesticide Evaluation SchemeExternal (WHOPES) has given either full or interim approval to more than 15 of these LLINsCdc-pdfExternal for use in the prevention of malaria. CDC is currently testing some of these and other LLINs to assess their performance and durability in the field.

LLINs have been associated with sharp decreases in malaria in countries where malaria programs have achieved high LLIN coverage. WHO now recommends that LLINs be distributed to and used by all people (“universal coverage”) in malarious areas, not just by the most vulnerable groups: pregnant women and children under 5 years. LLINs are most commonly distributed through mass campaigns approximately every 3 years.

Between 2008 and 2010, a total of 294 million nets were distributed in sub-Saharan Africa. Funding for LLINs gradually increased from 2004 when 5.6 million nets were delivered, to 2010, when 145 million nets were delivered. However, funding for nets, and other malaria prevention and control interventions, is likely to plateau or even decline in the next few years due to the current economic situation. One way to maintain net coverage is to increase the lifespan of LLINs. A recent study estimated that up to $3.8 billion could be saved over 10 years by increasing the lifespan of nets from 3 years to 5 years.

Mobilizing resources to procure these nets remains a major challenge. After much debate, WHO now recommends that LLINs be provided free. Multilateral and bilateral donors and programs such as the Global Fund against HIV/AIDs, Tuberculosis, and Malaria and the President’s Malaria Initiative support the purchase of LLINs for many countries. Individual donations of nets can be made through organizations such as CDC FoundationExternal or Malaria No MoreExternal.