A Cautionary Tale: The Risks of Unproven Antimalarials

Tom Miller has made several trips for missionary and medical purposes over the last 25 years to countries such as Kenya, Haiti, Peru and Russia. His face lights up when he describes the people he’s encountered during these trips, and the work he’s done.

For his trip to Nigeria in December 2004, Tom had every intention of staying healthy. His preparations included receiving the recommended yellow fever, hepatitis A, and other immunizations at his local county health department in Oklahoma Cityexternal icon. The health department also gave him literature about malaria and recommended that he take antimalarial medication as a preventive measure. 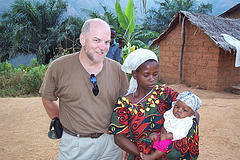 Tom knew that malaria was a serious illness, and he knew about the recommendations for prevention of malaria using mefloquine hydrochloride. He had taken mefloquine on previous trips to countries with a malaria risk, and had successfully prevented infection. However, recent stories of drug-resistant malaria and some reported side effects of mefloquine caused him to search for an alternative on the Internet. He performed an Internet search for a homeopathic malaria treatment and found a Web site with a homeopathic product claiming to be effective in preventing and treating malaria. The Web site had several testimonials by people claiming they’d either prevented malaria or treated it by taking a homeopathic medication. Unfortunately, Tom was not aware that homeopathic medications are not regulated by the federal Food and Drug Administrationexternal icon, so their effectiveness has not been scientifically proven. Trusting the information he found on the Web site, he purchased the homeopathic medication. The cost was about half the cost of a prescription for mefloquine.

Tom Miller showing the homeopathic product that failed to protect him from malaria.(Courtesy Tom Miller)

Tom followed the instructions for preventive treatment using the homeopathic product before and during his stay in Nigeria. He was aware of having mosquito bites, and his sleeping facilities did not include mosquito nets, another recommended prevention activity.

When he returned to the U.S., it was the Christmas holiday season, so Tom planned a visit to his family in Silver Creek, Mississippi. A few days prior to driving to Mississippi he began experiencing flu-like symptoms and chills, but was not overly concerned, thinking it probably was a mild case of the flu.

When he arrived at his parent’s home the day before Christmas, the symptoms worsened. He increased his dosage of the homeopathic product as the product’s manufacturers recommended for treatment of malaria, and began to notice a rash on his arms and chest. He attended family gatherings but became more ill as time progressed, with a fever of 103.7, nausea and rash. Finally, his father insisted on taking him to the local emergency room in Monticello, and from there he was transferred to Forrest General Hospital in Hattiesburg . He was moved quickly to intensive care with the diagnoses of renal insufficiency, anemia, disseminated intravascular coagulation (a syndrome that can quickly lead to shock and death) and encephalopathy (a brain dysfunction). He was placed on a ventilator. A lab test (called a blood smear) showed parasites of Plasmodium falciparum, the parasite that causes the most severe form of malaria. His family was told that Tom’s condition was quite grave, and that he might not survive. He was treated with antimalarial drugs and multiple blood products and came to the brink of requiring dialysis due to the damage to his kidneys. Fortunately, despite the severity of Tom’s illness, the treatment proved successful. Tom says that he woke up seven days later with little memory of how he ended up in the hospital.

Blood smear from Tom Miller during his illness, showing several red blood cells, one of which (arrow) is infected by a malaria parasite. (Courtesy Oklahoma State Department of Health, Public Health Laboratory)

Tom acknowledges his decision to visit family in Mississippi probably saved his life, since he would otherwise have returned to Oklahoma alone with no one to care for him. Although thankful to have recovered, he encountered new obstacles in trying to access insurance coverage for his hospitalization. Since his illness occurred while in the process of changing insurance companies, he was left to pay his medical costs of more than $35,000. His employer of 12 years kindly contributed towards his hospital bill, and his church made a small contribution as well, but Tom still found himself responsible for most of the bill.

Besides his financial burden, he also missed two weeks of work. He admitted that he probably returned to work too soon, but was able perform his responsibilities from his office. Despite his previous good health, his recovery period was approximately six months.

Tom is thankful for his recovery, and has a good sense of humor about what he learned from not taking the recommended malaria medication. When asked what advice he would give about malaria prevention, he says he would recommend consulting the health department and following their recommendations for malaria prevention.

Travelers going to areas where they may be exposed to malaria are advised to consult the CDC website mentioned above, and follow the recommendations which include use of mosquito repellent, mosquito nets, and approved preventive medications. Beware of medications obtained without physicians’ prescriptions as fake medications also may place people at risk for malaria. Following the correct information can prevent malaria.