Anopheles gambiae, one of the primary vectors of malaria in Africa, breeds in numerous small pools of water that form due to rainfall. The larvae develop within a few days, escaping their aquatic environment before it dries out. It is difficult, if not impossible, to predict when and where the breeding sites will form, and to find and treat them before the adults emerge. Therefore, larval mosquito control for the prevention of malaria in Africa has not been attempted on a large scale. It may, however, be appropriate for specific settings such as urban environments or desert fringe areas where habitats are more stable and predictable. In contrast, in Southeast Asia, Europe and the Americas, larval control has proven extremely effective.

Larval control may be implemented through environmental modification – draining and filling – or through use of larvacides. Though biological control using fish is often used, evidence for its effectiveness is limited. 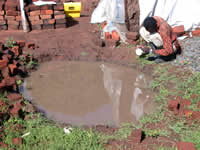 Source reduction: The burrow pit resulting from the activity of this brickmaker in Kisian (western Kenya) is a potential breeding site for Anopheles larvae. Filling the burrow pit would remove a source of Anopheles adults.

Source reduction is removal or permanent destruction of mosquito breeding sites. The larval habitats may be destroyed by filling depressions that collect water, by draining swamps or by ditching marshy areas to remove standing water. Mosquitoes that breed in irrigation water can be controlled through careful water management.

For some mosquito species, habitat elimination is not possible. For these species, chemical insecticides can be applied directly to the larval habitats. Other methods, which are less disruptive to the environment, are usually preferred:

Potential biological control agents, such as fungi (e.g., Laegenidium giganteum) or mermithid nematodes (e.g., Romanomermis culicivorax), parasitize and kill larval mosquitoes but they are not efficient for mosquito control and are not widely used. Likewise, mosquito fish (including Gambusia affinis) have largely been ineffective.

Fogging (area spraying) using a machine mounted on the back of a truck.

Fogging or ultra-low volume spraying or area spraying is primarily reserved for emergency situations such as epidemics. Fogging has not been shown to be effective in any malaria-endemic areas. Fogging and area sprays must be properly timed to coincide with the time of peak adult mosquito activity, because resting mosquitoes are often found in areas that are difficult for the insecticide to reach (e.g., under leaves, in small crevices). In addition, fogging and area spraying will have to be repeatedly applied to have an impact, and it can easily become too costly to maintain.

Personal protection measures include the use of window screens, ITNs, and repellents (such as DEET) and wearing of light-colored clothes, long pants, and long-sleeved shirts. Well-constructed houses with window screens are effective for preventing biting by mosquitoes that bite indoors and may have contributed to the elimination of malaria from the United States and Europe. Recent evidence suggests that repellents may be effective in reducing malaria transmission and may be appropriate for areas where mosquitoes bite outdoors or early in the evening when people are not using ITNs. However, while repellents are recommended for travelers to malaria-endemic areas, further work to develop repellent formulations that are easily deployed in endemic countries is needed.

Introducing sterile male mosuitoes into an area has been successfully applied in several small-scale areas. However, the need for large numbers of mosquitoes for release makes this approach impractical for most areas.

Genetic modification aims to develop mosquitoes that are not susceptible to the parasite. This approach is still years from application in field settings, though there have been remarkable advances in recent years in technology to allow direct modification of the mosquito genome.