A Cautionary Tale: A Family's Ordeal with Malaria

Fatai and Hanifat Adisa and their baby Mariam moved from Nigeria to the United States 10 years ago. Since then, their family had grown to five children, aged 2 to 11. They all lived in Indiana, where Mr. Adisa worked as a physical therapist.

Preparing for the Trip

At the end of 2005 the entire family had an opportunity to visit Nigeria. To prepare her children for the trip, Mrs. Adisa consulted a pediatrician who prescribed antibiotics and drugs for pain and fever in case anyone should get sick. 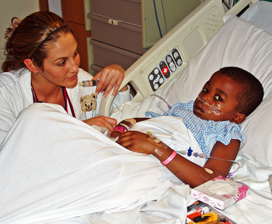 Malaria sent Ridhwan Adisa to the hospital, but he was not the only one to become ill. (Courtesy John Easton, University of Chicago Hospitals)

Mrs. Adisa also wanted to protect her children against malaria, a dangerous disease occurring in her native country. She asked the local health department about shots against malaria and was told, correctly, that there was no such malaria vaccine. The health department did tell her that there were pills that could be taken against malaria. However, Mrs. Adisa thought that the pills should be used only in case of sickness; she did not realize that in fact these pills could be taken to prevent malaria infection in the first place. So, the family left for their trip without the protection offered by drugs to prevent malaria (malaria chemoprophylaxis).

Dancers in Nigeria, the country where the Adisa family went to visit friends and relatives. (Courtesy Frank O. Richards, The Carter Center)

Over several weeks in Nigeria, the Adisa family visited friends and relatives in many places: Lagos, Abuja, Kano, and Ilorin. The children loved it so much that some of them did not want to go back to the United States.

The family returned to Indiana in late January 2006, and the four older children went back to school. However, two weeks later they began having fever, headaches, and flu-like symptoms and were cranky. A couple of days later, the school called Mrs. Adisa to say that Mariam, her 11-year-old daughter, had severe headaches. Concerned, she took all five children to the local clinic. 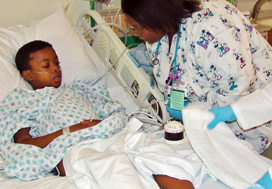 There the four older children were diagnosed with the flu, and Mariam was told that she also had a strep throat.

They were treated with antibiotics and a drug for pain. Three days later Mrs. Adisa noticed that two of her sons, Ridhwan, 6, and Mohammad, 10, had yellow eyes, and another son, Mansour, 4, did not look well either. She took all three to the local hospital, where the doctors examined their blood and suspected malaria. They promptly transferred the boys to the University of Chicago Hospitals, a couple of hours away by ambulance, for more specialized diagnosis and treatment. 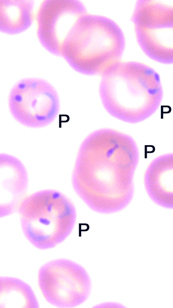 Malaria parasites in the blood of Mansour Adisa. Examined under the microscope, four red blood cells (marked “P”) are infected with Plasmodium falciparum parasites, the type that can cause severe, potentially fatal disease. (Courtesy University of Chicago Hospitals)

At the University of Chicago Hospitals, the doctors confirmed that all three boys had malaria due to Plasmodium falciparum, which can cause severe disease, even death. Ten-year-old Mohammad’s malaria had made him severely ill. His blood was too acidic (lactic acidosis) and had too little sugar (hypoglycemia). He was very anemic and also had episodes of low blood pressure.

The doctors admitted Mohammad to the pediatric intensive care unit (PICU) and connected him to a breathing machine. They administered intravenous fluids to correct Mohammad’s acidosis and hypoglycemia; drugs to correct his low blood pressure; extensive transfusions of blood and plasma to correct the damage caused by malaria; and intravenous drugs to destroy the malaria parasites.

While Mansour and Ridhwan were not as critically ill as Mohammad, like him they had yellow eyes, a sign of jaundice associated with severe malaria. In addition, Mansour had a high parasite load; one out of every 20 of his red blood cells was infected by malaria parasites. The doctors admitted the two boys to the PICU, where they received intravenous treatment with antimalarial drugs and blood transfusions.

To be on the safe side, the doctors also examined the blood of the other two children in the family and found that they too were infected with falciparum malaria. One day after their brothers, both girls, Mariam and Noorat, 2, were admitted to the general pediatric unit and treated with antimalarial pills.

Keep Yourself Safe from Malaria

Most fortunately, all five Adisa children recovered from this extraordinary ordeal. After two days of intensive treatment, Mohammad was well enough for the doctors to disconnect him from the breathing machine. By day three, Mohammad, Mansour and Ridhwan felt much better and were moved to the general unit. By the seventh day following their hospitalization, all five children had been discharged from the hospital, well recovered, and free of malaria.

Their parents are very thankful for this happy outcome. They wish to share this cautionary tale to encourage travelers to areas where malaria transmission occurs to take the simple precautions that can prevent this dangerous disease.

*Fatai and Hanifat Adisa gave the Centers for Disease Control and Prevention permission to interview them about their children’s illnesses, discuss the case with physicians, and publish this story.