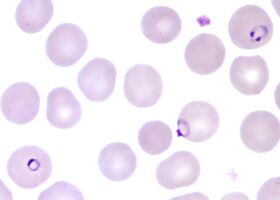 Plasmodium species found in patient PH-2. (Image not from this patient.)

The parasite species is shown in the figure to the right.

Question 1: What is the species?

The parasites seen are typical of P. falciparum: Only ring-stage parasites are present; there is a parasite with double chromatin dots (right upper corner); and a parasite in “appliqué” form, pressed against the red cell membrane. The third characteristic of P. falciparum, not shown here, would be multiple parasites infecting the same red cell.

That is incorrect. Please, try another answer

The patient is treated with intravenous quinidine and doxycycline.

Question 2: Among the modes of infection below, which one is the most likely?

In any investigation of possible locally transmitted malaria, unreported travel to a malaria-endemic area must always be considered first. Often repeated questioning is required as well as inspection of travel documents such as passports in order to fully evaluate this possibility.

In light of the patient’s medical history, recent international travel would have been unlikely.

In this case of malaria the major risk factor given for malaria was the blood transfusion. It is possible that needlestick contamination may have been the mode of transmission in this hospital setting, though this is much less likely.

Had this patient not recently received a blood transfusion, a known risk factor for malaria, then local transmission by an Anopheles mosquito or “airport malaria” would need to have been considered.

The dates of onset of symptoms, between July 12 and September 14, are shown in the epi curve.

Question 3: What are the next steps of this epidemiologic investigation to determine the mode of transmission?

The next step in the investigation of this case is a donor trace-back of the 4 units of packed red blood cells (PRBC) used for this patient’s transfusions. This trace-back includes:

If a donor is implicated, tracing of all products donated by this individual is essential. Any other recipients of this donor’s products will need evaluation and may need testing and treatment.

The implicated donor should also be treated.

Note: Persons acquiring either P. vivax or P. ovale infection through blood transfusion DO NOT require primaquine therapy. No liver stage (hypnozoites) develops with this mode of infection.

The blood bank should remove the donor from the donor pool as appropriate according to the FDA guidelines.

Confirm presence of Anopheles mosquitoes where the patient lives

Stored serum samples from all donors are tested. One donor has elevated IFA titers (1:16,384 to P. falciparum, 1:16,384 to P. malariae, 1:1024 to P. ovale, and 1:256 to P. vivax) indicating previous malaria infection. Though microscopy is negative, PCR performed on a stored sample from this same donor from the time of donation detects P. falciparum, indicating active infection. This donor was born in West Africa, had lived in Europe, and then returned to West Africa, where he had lived for approximately 20 years before immigrating to the United States 2 years ago.

Donors who have been implicated as infection sources in transfusion-transmitted malaria cases often have had undetectable levels of parasitemia; therefore, antibody detection has been the method of choice to identify infected donors in CDC investigations of transfusion-transmitted malaria cases. Malaria antibody testing is 95% sensitive and 99% specific. Because the donor emigrated from an area with endemic malaria, the positive predictive value for this test is high.

No available laboratory test is suitable for screening donated blood for malaria. Such a test would require 1) large-scale use design, 2) high sensitivity and specificity, and 3) ability to detect all species of Plasmodium that affect humans. In the United States, prevention of transfusion-transmitted malaria largely depends on careful questioning of prospective donors to defer those at increased risk for malaria. The Food and Drug Administration (FDA) recommends deferring residents of malaria-endemic areas for 3 years after they emigrate from those areas and deferring persons who have had malaria for 3 years after they become asymptomatic; the American Association of Blood Banks has published standards consistent with FDA recommendations (Box).

In this case, the donor from West Africa should have been deferred. The case described in this report underscores the importance of close cooperation between managers of blood collection centers and state and federal public health officials whenever transfusion-related illness occurs. Such cooperation can facilitate traceback investigations and ensure prompt care of both donors and recipients, helping to strengthen the screening process, making blood transfusion as safe as possible, and ensuring an adequate supply of a lifesaving resource.

Malaria should be considered as a differential diagnosis of the febrile patient who has received a blood transfusion.

No suitable laboratory test is available for screening donated blood for presence of malaria parasites. Thus prevention of transfusion-transmitted malaria depends on careful questioning of prospective donors to defer those at increase risk for malaria.