CDC’s insectary maintains colonies of Anopheles mosquitoes collected from areas of the world where malaria is or can be transmitted. The mosquitoes are raised in a climate-controlled insectary with additional rooms for secure biological containment of malaria-infected vectors. These vector species are used for both transmission experiments and vector genetics and behavioral studies. 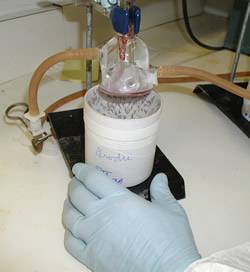 Mosquitoes being fed experimentally using a parafilm membrane; the blood meal is pumped on top of the membrane.

The facilities also serve as a repository for the active collection and study of over a dozen species and numerous isolates of malaria parasites of human and nonhuman primates. The investigations are carried out in vivo in animals or mosquito vectors and in vitro where possible through tissue culture of the parasite.

The vector colonies are from the United States (Anopheles quadrimaculatus and An. freeborni); India (An. stephensi); Africa (An. gambiae and An. arabiensis); Southeast Asia/Thailand (An. dirus, An. sawadwongporni, and An. minimus); Papua New Guinea (An. farauti); Spain (An. atroparvus); and El Salvador (An. albimanus).

CDC maintains a large modern animal facility in Chamblee, Georgia, approved by the American Association for the Accreditation of Laboratory Animal Care, International. This resource provides a platform for transmission, infection, and disease models to help provide the knowledge that will facilitate the improvement and development of new malaria interventions through vaccines, chemotherapy, or transmission reduction and elimination.

Primate Malaria Species and Their Use

Studying these parasites during passage through mosquitoes, monkeys, and culture allows the modeling of parasite-host relationships on immunity, pathology, and the effectiveness of antimalarial drugs. New isolates and strains of malaria parasites are collected, adapted to laboratory culture or nonhuman primates, and tested using the latest available treatments.

Primates and Their Contribution

The CDC Chamblee animal facility houses several New World primate species, such as Aotus nancymai, A. vociferans (owl monkeys), and Saimiri boliviensis (squirrel monkeys); and Old World monkeys, such as Macaca mulatta and M. fascicularis (both macaques) from regulated feral colonies, commercial breeders, or in-house laboratory-born under the direction of the resident clinical veterinarian. All protocols are reviewed and approved by the institutional Animal Care and Use Committee in accordance with procedures described in the U. S. Public Health Service Policy, 1986.

CDC maintains DPDx, a web site to strengthen the diagnosis of parasitic diseases, including malaria, both in the United States and abroad.

The site contains concise reviews of parasites and parasitic diseases, including an image library and a review of recommended procedures for collecting, shipping, processing, and examining biologic specimens and provides diagnostic assistance. Laboratorians and other health professionals can ask questions and/or send digital images of specimens for expedited review and consultation with CDC staff free of charge.