Microscopic examination remains the gold standard for laboratory confirmation of malaria in the malaria-endemic world, as well as in the United States.

A blood specimen collected from the patient is spread as a thick or thin blood smear, stained with a Romanovsky stain (most often Giemsa), and examined with a 100X oil immersion objective. Visual criteria are used to detect malaria parasites and to differentiate (when possible) the various species and life cycle stages. (See DPDx specimen preparation and DPDx Plasmodium species comparison chartCdc-pdf.)

Advantages: Microscopy is an established, relatively simple technique that is familiar to most laboratorians in endemic countries. In such areas, microscopy is a standard technique used for diagnosing other diseases (such as tuberculosis), often by the same laboratorians using the same facilities and equipment. Blood slide microscopy makes it possible to count the number of parasites and is more useful than rapid diagnostic tests for monitoring the effectiveness of malaria treatment. 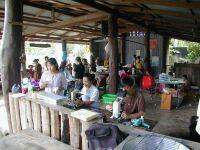 Migrant workers clinic at Mawker Tai camp in Thailand near the border with Burma. Microscopy plays a critical role in diagnosis of malaria, one of the major health problems in this area. Image contributed by the Shoklo Malaria Research UnitExternal, Mae Sot, Thailand.

Disadvantages: Microscopy requires a level of skill often not available in many health facilities in several malaria-endemic countries, especially in remote rural areas, where most malaria transmission occurs. In addition, lack of functional microscopes or electricity to run them, lack of or sub-standard reagents such as stains, and high workloads may affect the quality of results.