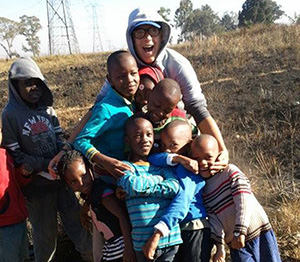 Brett with some of the Ugandan children for whom he helped to build a community center.

By the time Brett Becker was a sophomore in high school, he was already a seasoned traveler to Uganda (a country in East Africa), having visited multiple times to help build a community center for special-needs children. He was only 15 years old when he decided to devote himself to this cause, after spending two months on a volunteer trip to a town called Masaka in Central Uganda. Touched by the appreciation of the community, he returned home with conviction to continue working for these children. Instead of going back to his normal teenage life at his private school in Atlanta, GA, he spent the next two years fundraising and traveling to Uganda to build a safe place for the special-needs children of Masaka — all the while completing his high school requirements and graduating early.

When Brett returned home from Uganda in the summer of 2014, hospitals in the United States were on high alert for Ebola among febrile patients returning from West Africa. Soon after his arrival, he complained of fatigue, which seemed perfectly normal after such a long journey, according to his mother, Amy. He didn’t have any other symptoms initially, but, two days later, he started to have fevers. Although his pediatrician had prescribed doxycycline (a medicine for malaria prevention to be taken before, during, and after trips to countries with malaria), Brett stopped taking the medication during the last two weeks of his trip. Brett recalls, “It’s extremely hard to remember to take pills every day, especially when you don’t take pills regularly. Your mind isn’t on the pills either [because] you’re mainly focused on the task ahead of you, and everything you have to do that day.” He would also occasionally sleep outside without a mosquito net due to the warm temperature.

Aware of his risk for malaria, Amy immediately took him to a local urgent care clinic. There, Brett’s blood was tested for malaria, but the results would take two days. Because malaria can be an immediately life-threatening infection, CDC recommends that malaria tests should be performed right away with results available within hours, rather than days.

While he waited for the results of the blood test, Brett continued to have very high fevers, over 104°F, which would come and go “like clockwork” every two hours. But he would also have periods of feeling well in between his fever episodes, which was “very deceiving.” In retrospect, according to Amy, this gave her false reassurance despite the severity of his illness. It was Saturday when the clinic called with the malaria diagnosis. However, instead of instructing him to seek immediate medical care, Brett was advised to wait until the following morning, because on a Saturday night, the local emergency room was expected to be extremely busy with long wait times.

By Sunday morning, however, Brett appeared much sicker and his urine had turned the color of tea, which can be an ominous sign for a person with malaria. When he arrived in the emergency room, Amy described an atmosphere of “pandemonium”; medical staff appeared frightened of her son, donning full protective equipment when entering his room. They seemed to be concerned that he may have Ebola despite the fact that he had not traveled to West Africa and was already diagnosed with malaria.

In the ER, they could not find anyone willing to draw his blood to reassess the severity of his malaria until a paramedic finally stepped in. This repeat malaria smear was again positive for malaria with a parasitemia reported at 0.1%, which is still low, although some of his laboratory results and clinical signs suggested he may have been developing severe malaria. As treatment for uncomplicated malaria — which can be treated with oral medications — he was given the first dose of oral quinine and doxycycline. It should be noted, however, that treatment of severe malaria requires IV medication in a hospital setting. He was discharged with a prescription for quinine with instructions to follow up with an infectious disease specialist in the next 48 hours. By then it was Sunday evening, and no local pharmacy carried oral quinine to fill his prescription.

The following morning, Brett looked like “he was dying” according to his mother. Still unsuccessful in finding a pharmacy that carried oral quinine, she began calling local infectious disease specialists she found online. The first five offices she reached could not see him immediately. Finally, she reached the office of Dr. Alvaro Lopez in Tucker, GA; the receptionist initially told her there was no availability that day but Amy was desperate, telling the receptionist, “I have a 16-year–old son who just came back from Uganda and I think he’s dying.” At Amy’s insistence, she reached Dr. Lopez on the phone, who immediately recognized the urgency of the situation. As soon as he saw Brett in his office, he began to make arrangements for him to be admitted to a hospital. “He was falling asleep mid-sentence and looked pretty awful,” said Dr. Lopez. Within hours, Brett was admitted to Emory St. Joseph’s Hospital intensive care unit (ICU) with diagnosis of severe P. falciparum malaria and started on proper intravenous antimalarial medicines. His parasitemia at the time of admission was astonishingly high at 19% (anything 5% or higher is considered severe and life-threatening). Brett’s prognosis was guarded for the first two nights of admission: his blood pressure was low, and he was jaundiced from the breakdown of infected red blood cells. His doctors were worried about further complications of severe malaria such as brain damage and kidney failure. However, after two worrisome nights in the ICU as his family and friends kept vigil, Brett turned the corner and began to show signs of improvement. He was in the ICU for four days in total and was able to leave the hospital another four days later. A month after discharge, he was fully recovered and playing basketball with his friends.

Brett is now a freshman in college, and, despite a six-month hiatus from travel after his illness, Brett has been back to Uganda twice since his recovery. The community center he has helped build now provides medical care and education for the special-needs children and members of the community. “(Malaria) is easy to prevent… if he had taken the prophylaxis his life wouldn’t have been in danger,” said Dr. Lopez. Now, whenever Brett travels to Uganda, he sees Dr. Lopez for a pre-travel consultation and takes malaria medicine for prevention and makes sure he always sleeps under an insecticide-treated bed net: “I take everything seriously. Even the smallest of things — like a mosquito bite — can really affect you. Always be prepared.” 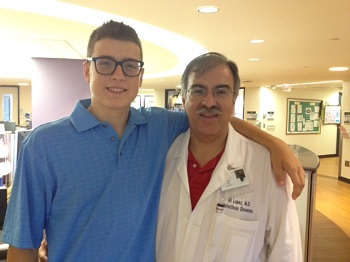