The U.S. President’s Malaria Initiative (PMI)external icon is a U.S. Government initiative designed to drastically reduce malaria deaths and illnesses in target countries in sub-Saharan Africa with a long-term vision of a world without malaria. The initiative was announced on June 30, 2005, when President Bush pledged to increase U.S. funding of malaria prevention and treatment in sub-Saharan Africa by more than $1.2 billion over 5 years (FY2006–FY2010).

Passage of the Lantos-Hyde Act in 2008 authorized an expanded U.S. Government malaria program for FY2009–FY2013 and PMI developed a USG Malaria Strategy (2009–2014) to achieve Africa-wide impact by halving the burden of malaria in 70 percent of at-risk populations in sub-Saharan Africa, or approximately 450 million people. The updated PMI strategy (2015–2020) reaffirms support for the long-term goal of worldwide malaria eradication and aims to build on progress made in the last decade and address new challenges that could hamper further progress. The updated strategy specifically sets out to meet the following three objectives by 2020:

To reduce malaria deaths and illness in each target country, PMI helps national governments deliver proven, effective interventions to those at risk for malaria.

PMI works to scale up access to and use of key proven interventions:

To help deliver these interventions and make sure they are having the desired impact, PMI also focuses on:

PMI is at work in 27 countries in sub-Saharan Africa and in one region in Asia—the Greater Mekong Subregion, which includes Burma, Cambodia, China (Yunnan Province), Lao People’s Democratic Republic, Thailand, and Vietnam. 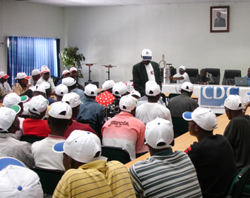 The first day of training of spray teams in Ondjiva, capital of Cunene Province, Angola.
(Courtesy RTI and USAID) 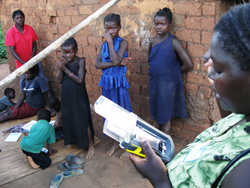 Ms. Virginia Taona of the Mozambican Red Cross uses a PDA equipped with a GPS in a survey of insecticide-treated bed nets in rural Mozambique, February 2006.
(Courtesy Ramesh Krishnamurthy) 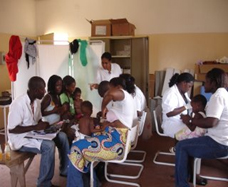 As part of a PMI operational research study led by CDC, health workers test children with fever for malaria in a busy clinic in Luanda, the capital of Angola. The very low prevalence of malaria found in the city allowed the National Malaria Control Program and PMI to focus malaria resources on rural areas where the rates of malaria infection are higher.
(Courtesy Julie Thwing, CDC)

For more than 60 years, CDC has provided scientific leadership in the public health efforts to fight malaria, increasing global understanding and capacity to prevent death and illness from malaria, especially among those most vulnerable – women and children. CDC science has also made critical contributions to our understanding of the impact of drug resistance and ways to prevent its spread. CDC has contributed to the development and evaluation of the interventions recommended by the World Health Organization, now being used in efforts to control malaria worldwide: ITNs, ACTs, IPTp, IRS, and SMC . PMI’s focus is to scale up access to and use of these interventions.

In addition, CDC has long worked closely with National Malaria Control Programs to build their technical leadership and capacity to implement effective prevention and control. Through PMI, it continues this work, by sharing its technical expertise, particularly in the following areas:

CDC is charged by U.S. Congress through the Lantos/Hyde Act to take a leadership position in strategic information (monitoring and evaluation, surveillance, operations research)—advising the U.S. Malaria Coordinator on priorities for strategic information activities and being a key implementer of such activities. To ensure that limited resources are being used wisely, CDC helps countries and the U.S. Government target appropriate malaria prevention efforts and understand the impact of PMI activities and interventions.

To find out more about PMI, visit the PMI websiteexternal icon.