In April 2018, Dr. Joe Donzelli and his daughter, Julia, were looking forward to a daddy-daughter spring break. The local high school had organized a group trip to Punta Cana in the Dominican Republic, and Dr. Donzelli’s wife and son were going, so Dr. Donzelli and Julia decided to go, too. Instead of staying with the large group, Dr. Donzelli and Julia chose to stay at a high-end resort two miles away. 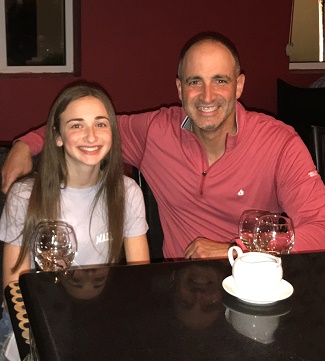 As a head and neck surgeon, Dr. Donzelli knew that he should check for any medical preparations needed for the trip. He was concerned about recent media reports of hookworm infection in tourists who had visited beaches in the Dominican Republic. He searched the CDC website, and being more concerned about the hookworm issue, did not note the malaria prevention recommendations. Many colleagues who had visited the Dominican Republic reassured him that there was nothing to worry about. With no other thought than to be careful on the beach to prevent hookworm, they departed for their trip.

For six days Dr. Donzelli and Julia stayed only at the resort, and despite the weather being cooler than anticipated, with frequent winds and rain, they were able to enjoy the pool and the beach.

Two weeks after their return to the United States, both Dr. Donzelli and Julia developed fever and body aches: he felt like someone was hitting his body with a sledge hammer, and she suffered with severe pack pain and chills. They both went to the emergency room right away. There, they told the staff about their travel to Dominican Republic and their current symptoms, which included fatigue, fever, chills, and sweats. After standard laboratory testing and chest x-rays, they both were told that they probably had the flu or another virus and were given antiviral medicine. For five days they took the medication, but overall, they both felt worsening symptoms. Neither had much of an appetite, but they tried to drink plenty of fluids. Julia developed on-and-off abdominal pain and a mild headache but seemed better on Day 5. However, by the sixth day, both had worsening symptoms, and as they were getting ready to go back to the ER, Julia began to faint. Joe prevented her from falling and called 911.

When they got to the hospital Julia’s heart was racing, her blood pressure was very low, and she was breathing rapidly. She was given fluids and was started on two strong antibiotics for infection. Julia’s lab results showed critically low blood cell counts, her liver was showing signs of injury, and her kidneys were not functioning normally. She was admitted to the hospital, put on medication to raise her blood pressure, and given a blood transfusion. Meanwhile, all tests that were conducted were found to be negative. Infectious disease doctors were consulted, and at first they suspected dengue fever, and they did not test her for malaria until the next day. Julia seemed to perk up with the fluids and the transfusion, but she was still breathing fast. Over the next 20 hours, her condition remained unchanged, but then she suddenly spiked a temperature of 104°F. Dr. Donzelli asked that she be transferred to the nearby children’s hospital. Within two hours of that request, Julia went into full pulmonary (lung) failure. She immediately had a breathing tube inserted and helicoptered to the children’s hospital.

Two days after Julia was first hospitalized, Dr. Donzelli received a text from the intensive care doctor at the first hospital: “Julia has malaria and you need to be checked.” He was admitted to the hospital, was diagnosed with uncomplicated malaria, and treated with antimalarial pills. After the first day of medications, his condition began to improve.

Unfortunately, Julia was not so lucky. She had severe malaria. She was found to have fluid in her lungs, and she needed to receive a transfusion of new blood cells. She was given quinidine and doxycycline, two types of antimalarial medications. Her body recovered quickly; in three days her parasite counts went down from 2.6% to 0.5% and then to zero. She was moved out of the intensive care unit in the children’s hospital in 8 days, and then discharged after 10 days in the hospital.

They’ve now been fully treated for malaria and are now close to feeling 100%, but Julia and Dr. Donzelli both still have long recoveries ahead of them. Julia was very weak and needed physical therapy and reconditioning. Joe lost 15 pounds and also had low blood counts, creating prolonged fatigue. Months will pass before either of them has normal blood counts.

Dr. Donzelli has agreed to let CDC share his family’s experience to spread awareness about the risks of malaria and the importance of malaria prevention, even in resorts that may seem safe.

“My family is so thankful for all the support we received from friends, family, health care providers, and God, and we understand that even the health care team needs to continue their education on management of tropical diseases. These once-thought-of remote illnesses are becoming more common as the numbers of travelers increase, and we need to open our eyes and ears to the lessons within these life stories. Educating others on malaria has become my mission, and I thank the CDC for allowing us to share this life-threatening experience.”