The intervention recommended by the World Health Organization (in March 2010) is intermittent preventive treatment in infancy with SP (SP-IPTi).  Studies show that SP-IPTi can significantly reduce clinical malaria and anemia in the first year of life, as well as hospital admissions associated with malaria infection or for any cause. If IPTi is widely adopted and implemented in areas recommended by WHO (see below), it could prevent approximately 6 million cases of malaria and save tens of thousands of lives every year in Africa, the region of the world most affected by malaria. 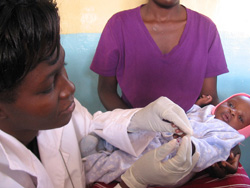 A doctor giving an SP injection as part of an IPTi study in Kenya.

SP-IPTi is the administration of a full therapeutic course of sulfadoxine-pyrimethamine (SP) delivered through the Expanded Program on Immunization (EPI) at intervals corresponding to routine vaccination schedules—usually at 10 weeks, 14 weeks, and about 9 months of age—to infants at risk of malaria, regardless of their malaria infection status.

IPTi is similar in concept to IPTp, or intermittent preventive treatment in pregnant women, which is the administration of a full therapeutic course of SP to pregnant women at least twice during pregnancy to prevent the adverse consequences of malaria infection for the mother and her fetus.

WHO recommends that SP-IPTi be given to infants at the same time as DTP2, DTP3, and measles immunizations, in countries in sub-Saharan Africa with:

Infants should not be given SP-IPTi if they are receiving a sulfa-based medication for treatment or prophylaxis, including co-trimoxazole (trimethoprim-sulfamethoxazole), a drug widely used as prophylaxis against opportunistic infections in HIV-infected or -exposed infants.