CDC supports malaria control efforts for both mainland Tanzania’s National Malaria Control Programme and Zanzibar’s Malaria Control Programme as part of the U.S. President’s Malaria Initiative (PMI). Since 2005, this effort has produced phenomenal gains in access to malaria prevention and treatment interventions in Tanzania and across the Zanzibar Archipelago. Read more about mainland Tanzania’s success in saving children’s lives in the RBM Progress & Impact Series. For more information on PMI activities in Tanzania, see www.pmi.govExternal.

In addition to the agency’s key role in guiding and implementing PMI in the United Republic, CDC and the Ifakara Health Institute (IHI)External have collaborated on a series of cooperative agreements since 2000. The CDC/IHI Malaria Programme in Tanzania has emerged as a globally recognized leader in implementation and applied research to guide malaria control programs for both the mainland and Zanzibar Ministries of Health and Social Welfare and public health programs across the continent.

Between 2000 and 2012 the CDC/IHI Malaria Programme in Tanzania achieved the following milestones: 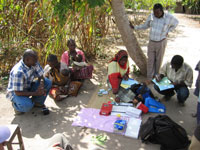 These activities were completed as part of the Interdisciplinary Monitoring Project for Antimalarial Combination Therapy in Tanzania (IMPACT-Tz), supported by CDC, the US Agency for International Development, and the Wellcome Trust. In addition to IHI, key partners included the Australian National University, the London School of Hygiene and Tropical Medicine, and the Swiss Tropical and Public Health Institute.

Since the completion of IMPACT-Tz, the CDC/IHI Malaria Programme in Tanzania has continued to support the Malaria Control Programmes in both Ministries by providing:

Beginning in 2010 the CDC/IHI Malaria Programme implemented an evaluation of mainland Tanzania’s Round 7 award from GFATM to explore the impact of introducing rapid diagnostic tests for malaria and a highly subsidized ACT in the private retail sector. This was done collaboratively with the ACT Consortium at the London School of Hygiene and Tropical Medicine, through a grant from the Bill and Melinda Gates Foundation. CDC and IHI are looking forward to future collaborative opportunities along this model.

For more information about the CDC/ IHI Malaria Programme in Tanzania, contact: