Only in some individuals do malaria episodes progress to severe life-threatening disease, while in the majority the episodes are self-limiting. This is partly because of host genetic factors such as the sickle cell gene.

The sickle cell gene is caused by a single amino acid mutation (valine instead of glutamate at the 6th position) in the beta chain of the hemoglobin gene. Inheritance of this mutated gene from both parents leads to sickle cell disease and people with this disease have shorter life expectancy. On the contrary, individuals who are carriers for the sickle cell disease (with one sickle gene and one normal hemoglobin gene, also known as sickle cell trait) have some protective advantage against malaria. As a result, the frequencies of sickle cell carriers are high in malaria-endemic areas.

Most earlier studies of the relationship between sickle cell trait and malaria were cross-sectional, and therefore some important data relevant to the protective effects of sickle cell trait were missing. CDC’s birth cohort studies (Asembo Bay Cohort Project in western Kenya ) conducted in collaboration with the Kenya Medical Research Institute allowed us to investigate this issue in depth. We determined that the sickle cell trait provides 60% protection against overall mortality. Most of this protection occurs between 2-16 months of life, before the onset of clinical immunity in areas with intense transmission of malaria. 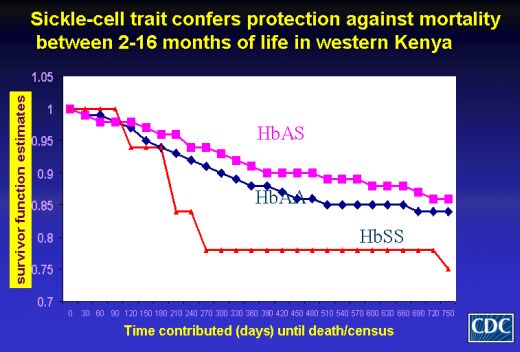