This investigation is closed.Listeria monocytogenes infection (listeriosis) is an important cause of illness in the United States. More information about listeriosis, and steps people can take to reduce their risk of infection, can be found on the CDC Listeria website. 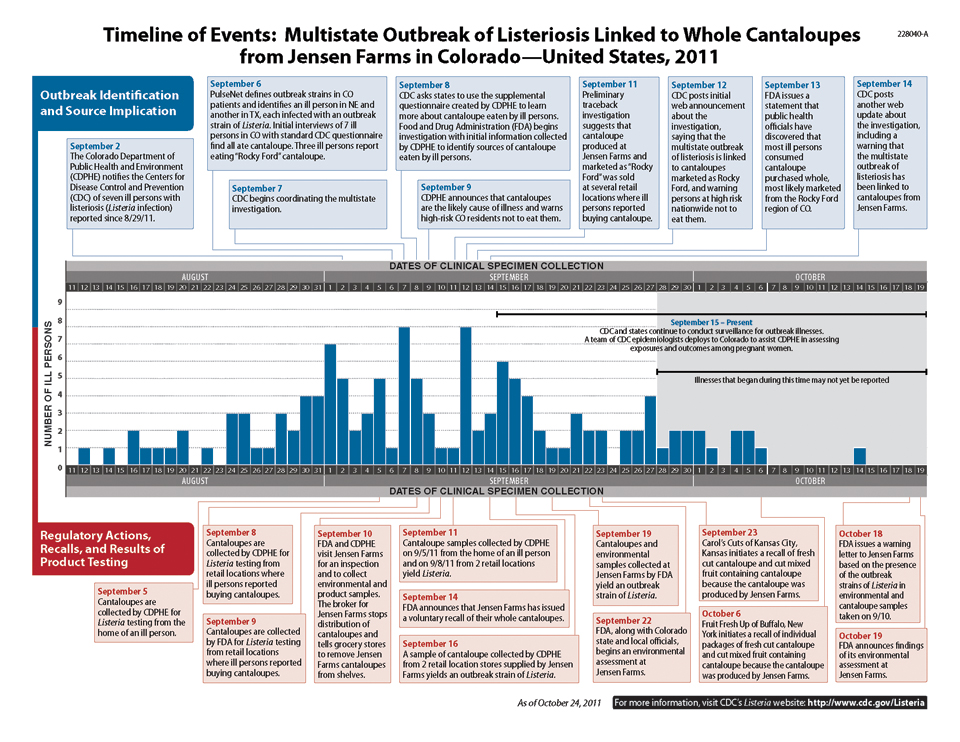 September 2: The Colorado Department of Public Health and Environment (CDPHE) notifies the Centers for Disease Control and Prevention (CDC) of seven ill persons with listeriosis (Listeria infection) reported since 8/29/11.

September 5: Cantaloupes are collected by CDPHE for Listeria testing from the home of an ill person.

September 6: PulseNet defines outbreak strains in CO patients and identifies an ill person in NE and another in TX, each infected with an outbreak strain of Listeria. Initial interviews of 7 ill persons in CO with standard CDC questionnaire find all ate cantaloupe. Three ill persons report eating “Rocky Ford” cantaloupe.

September 9: CDPHE announces that cantaloupes are the likely cause of illness and warns high-risk CO residents not to eat them. Cantaloupes are collected by FDA for Listeria testing from retail locations where ill persons reported buying cantaloupes.

September 10: FDA and CDPHE visit Jensen Farms for an inspection and to collect environmental and product samples. The broker for Jensen Farms stops distribution of cantaloupes and tells grocery stores to remove Jensen Farms cantaloupes from shelves.

September 11: Preliminary traceback investigation suggests that cantaloupe produced at Jensen Farms and marketed as “Rocky Ford” was sold at several retail locations where ill persons reported buying cantaloupe. Cantaloupe samples collected by CDPHE on 9/5/11 from the home of an ill person and on 9/8/11 from 2 retail locations yield Listeria.

September 12: CDC posts initial web announcement about the investigation, saying that the multistate outbreak of listeriosis is linked to cantaloupes marketed as Rocky Ford, and warning persons at high risk nationwide not to eat them.

September 13: FDA issues a statement that public health officials have discovered that most ill persons consumed cantaloupe purchased whole, most likely marketed from the Rocky Ford region of CO.

September 14: CDC posts another web update about the investigation, including a warning that the multistate outbreak of listeriosis has been linked to cantaloupes from Jensen Farms. FDA announces that Jensen Farms has issued a voluntary recall of their whole cantaloupes.

September 15-Present: CDC and states continue to conduct surveillance for outbreak illnesses.  A team of CDC epidemiologists deploys to Colorado to assist CDPHE in assessing exposures and outcomes among pregnant women.

September 16: A sample of cantaloupe collected by CDPHE from 2 retail location stores supplied by Jensen Farms yields an outbreak strain of Listeria.

September 22: FDA, along with CO state and local officials, begins an environmental assessment at Jensen Farms.

October 6: Fruit Fresh Up of Buffalo, New York initiates a recall of individual packages of fresh cut cantaloupe and cut mixed fruit containing cantaloupe because the cantaloupe was produced by Jensen Farms.

October 18: FDA issues a warning letter to Jensen Farms based on the presence of the outbreak strains of Listeria in environmental and cantaloupe samples taken on 9/10.