FoodCORE Centers and Real-World Use of GI CIDTs: Adapting to Changes in Clinical Diagnostics 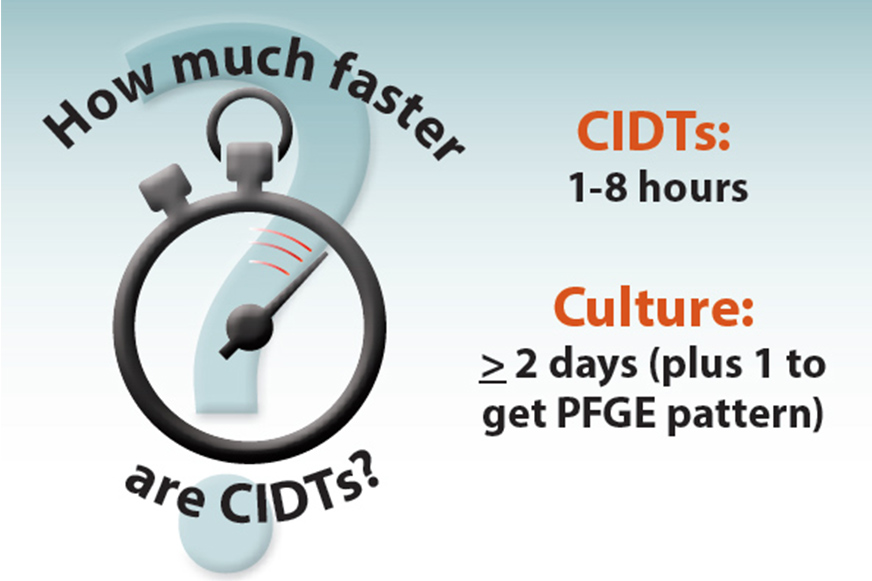 The consequences of increased use of culture-independent diagnostic tests (CIDTs) on disease surveillance are no longer theoretical, and FoodCORE centers are making changes to assure they can continue to efficiently identify and investigate enteric outbreaks.

What are culture-independent diagnostic tests?

Culture-independent diagnostic tests (CIDTs) are clinical tests that identify disease-causing pathogens to help clinicians quickly diagnose and treat illnesses. Hospitals and clinics use CIDTs because they’re less labor-intensive and provide results faster than traditional laboratory testing methods. Some CIDTs are capable of testing for more than 20 pathogens simultaneously in as little as an hour, compared to the days it takes to identify a single pathogen when using traditional bacterial culture tests. Public health laboratories are also beginning to use these rapid tests and finding ways to use the technology to improve outbreak surveillance, investigation, and response.

“CIDTs can get the quick answers that doctors need and public health can use to help investigate outbreaks, but culture is necessary to subtype the pathogen, using PFGE or WGS, to identify an outbreak and to determine if the pathogen is resistant to antibiotics.”

Why are CIDTs a concern for public health?

CIDTs can improve the speed of diagnosis but may limit a public health lab’s ability to detect outbreaks because they do not provide isolates from bacteria grown in culture. Laboratories need isolates to conduct pulsed-field gel electrophoresis (PFGE) or whole genome sequence (WGS), laboratory methods which are used to link cases. Clusters are identified when a public health laboratory compares PFGE patterns or WGS sequences and finds two or more people infected with a bacteria with the same pattern or similar sequence. PFGE patterns and WGS sequences are like DNA fingerprints, so finding clusters of people infected with the same pattern or sequence means that those people likely got sick from a common source. Many clinical laboratories are primarily using CIDTs, shifting the time and resources needed for pathogen isolation by culture to public health laboratories, impairing prompt and thorough outbreak detection. Additionally, without isolates, laboratories can’t test pathogens for antibiotic resistance. Antibiotic resistance testing is not only important for public health surveillance, but also vital to ensure patients are treated effectively.

How are FoodCORE centers adapting to CIDT?

Despite concerns about the impact of CIDTs on public health surveillance, they have proven to be useful for some public health needs. FoodCORE centers have used CIDT results to determine the cause of outbreaks that weren’t identified through routine clinical surveillance; to find outbreaks resulting from uncommon pathogens; and to provide information quickly to partners, the media, and the public.

Health departments aren’t always able to determine what pathogen made people sick or caused an outbreak. The time and resources it takes to test for even a few pathogens make it difficult for most laboratories to test for all potential pathogens. Because of this, it can take a long time to identify pathogens that cause some outbreaks, and in some instances the pathogen may never be identified. With the use of CIDT, public health laboratories can quickly and easily test for a broad range of pathogens simultaneously.

The Minnesota FoodCORE site investigated an outbreak in the fall of 2015 that was identified when members of the public called to report illnesses after eating at a pizza restaurant. Symptom information alone was not enough to determine what pathogen was making people sick, but by performing CIDT, they were able to quickly determine that it was atypical Enteropathogenic E. coli, or EPEC, a pathogen that isn’t commonly tested for or linked to outbreaks. Knowing the pathogen that caused the outbreak allowed Minnesota epidemiologists and environmental health specialists to quickly and accurately focus their investigations and response appropriately.

Historically, clinical laboratories were only able to test for uncommon pathogens on a case-by-case basis and only after other more common pathogens were ruled out because of restrictive costs and complexities of routinely performing diagnostic tests. This gap in testing capability made it difficult to identify outbreaks of infections with less common pathogens.

In the spring of 2015, a hospital in northeast Wisconsin started routinely using CIDTs to help diagnose illness in patients with diarrhea. That year, the hospital identified nine people infected with Cyclospora, a pathogen the hospital hadn’t routinely tested for before using CIDTs. After interviewing patients, the FoodCORE epidemiologists learned that all but one ate at the same restaurant and determined that contaminated cilantro was the source of this outbreak. If the hospital laboratory had not used CIDTs, the outbreak might not have been detected, or it could have been found much later after more people became ill. 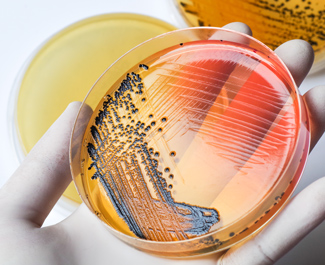 Visit These Websites for More Information on Lab Testing and CIDTs:

PulseNet: The Future of PulseNet

For years, PFGE has been considered the gold standard for linking cases of foodborne illness and finding outbreaks. There are many advantages to using PFGE, but it requires bacterial isolates. CIDTs identify pathogens faster which results in faster public health action and prevention of additional cases. Waiting for culture results can be difficult for public health officials when there is pressure from the media, public, and other members of their investigation teams to get information faster.

In the fall of 2015, the Oregon FoodCORE site investigated an outbreak of E. coli associated with a Mexican restaurant. Although PFGE was necessary to determine whether ill persons met the outbreak case definition, investigators were able to screen for potential new cases quickly by using CIDTs to identify the presence of toxin genes stx1 and stx2. This accelerated the response to the outbreak, allowing investigators to take action faster.

CIDTs also helped speed the South Carolina FoodCORE site’s response to a possible outbreak when they were informed of a cluster of gastrointestinal illnesses at a daycare. The investigation revealed that seven children and two staff members were ill. Three stool samples were sent to the public health laboratory for testing. Using CIDT, the laboratorians identified sapovirus in the samples. Sapovirus causes diarrhea and vomiting that typically clears up without treatment within a few days. With this information, the FoodCORE site could tell the daycare the cause of the outbreak within a week. This rapid diagnosis helped to inform the parents and alleviate fears about a more serious pathogen. Before CIDT, the laboratory would have needed to perform a series of tests for both viral and bacterial pathogens over a number of days and, even then, traditional tests would not have identified this pathogen.

Until it is possible to link cases and determine antimicrobial resistance without an isolate, CIDTs will continue to be a concern for enteric disease surveillance and investigations. As more clinical laboratories start using CIDTs, the risk of losing valuable information from the isolate such as PFGE patterns or WGS sequences will be a growing concern. Many public health laboratories will assume the burden of culturing specimens; this process is slow, expensive, and likely not sustainable given current public health laboratory infrastructure.

Additional challenges exist including receiving CIDT reports from hospitals, the potential for loss of pathogen viability during transport to the public health laboratory, setting case definitions during outbreaks, communicating CIDT-positive results with patients, excluding patients from working in high-risk settings such as daycares or restaurants, and interpreting results that are positive for multiple pathogens. These concerns should be balanced carefully against the advantages CIDTs can offer clinicians and public health practitioners. The FoodCORE centers will continue to share lessons learned with other state and local health departments as they work with real-world implications of CIDTs.