“We, as students, have been afforded the opportunity to share in the ownership of this new program. The collaboration between FoodCORE, FoodNet and the Department of Public Health epidemiologists creates a unique atmosphere for learning and working as a team.”

Since 2012, Connecticut FoodCORE has hired and trained a student team to provide added epidemiologic capacity. In addition to interviewing all STEC and Listeria cases, the student team also works closely with local health departments to help interview patients with Salmonella infections. The team has made significant contributions to several in-state and multistate outbreak investigations and provides surge capacity to the Connecticut Department of Public Health and local health departments during outbreak investigations.

Percentage of People with Salmonella Infections Interviewed by Year, Connecticut, 2009-2015 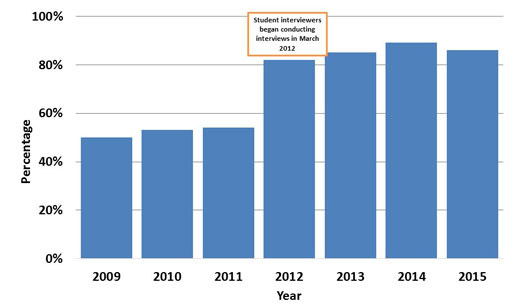