Related Pages
What is raw milk? 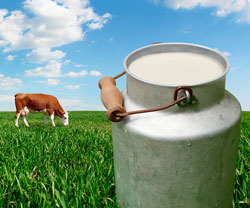 Raw milk is milk from cows, sheep, or goats that has not been pasteurized to kill harmful, disease-causing germs, including bacteria, viruses, and parasites. Pasteurization is the process of heating milk to a temperature high enough to kill these germs.

Milk is a staple of a healthy diet; however, unpasteurized (raw) milk can make people sick because it has not been treated to kill germs. Lack of germ-killing treatment makes raw milk dangerous to your health and more likely to cause foodborne illness outbreaks than pasteurized milk.

Between May and November 2014, the Utah Department of Health (UDOH) noticed a dramatic increase in the number of people sick with a rare strain of Campylobacter. Over half of the sick people reported drinking raw milk from the same dairy. Sale of raw milk is legal in Utah with a permit obtained from the Utah Department of Agriculture and Food (UDAF). Initial testing of raw milk at the dairy was negative for Campylobacter, so the dairy was allowed to continue to sell raw milk. UDOH continued to identify cases and issued a press release recommending that the public not drink raw milk.

It is difficult to detect Campylobacter in raw milk, so UDOH and UDAF met with local health departments and federal partners to discuss new sampling techniques. Following this discussion, microbiologists from the Utah Public Health Laboratory joined investigators to conduct a follow-up environmental assessment at the dairy. Using a new sampling method, raw milk was collected, adjusted to a neutral acidity level, and then tested for Campylobacter. The same strain of Campylobacter making people sick was found in the neutralized raw milk, and the dairy’s raw milk permit was immediately suspended.

The determination of Utah health agencies to confirm the source of the outbreak and their collaboration with partners stopped this outbreak and prevented additional illnesses. Other public health laboratories and environmental health specialists can consider using this sampling method of neutralization before testing raw milk for Campylobacter.

Read the MMWR article about this outbreak.

Read more about Food Safety and Raw Milk and get the facts about raw milk Cdc-pdf[PDF – 363KB]External.