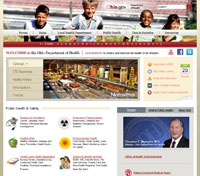 Norovirus spreads quickly, but public health experts in Ohio are even faster. FoodCORE funding has allowed Ohio’s public health laboratory to test for norovirus more frequently, which helps to confirm local outbreaks faster. In the first three months of 2012, the Ohio Department of Health confirmed that 76 outbreaks were caused by norovirus. This compares with the same three-month period in 2011, which had 35 confirmed norovirus outbreaks reported; the five-year average (2007–2011) for this three-month period was 30 confirmed norovirus outbreaks.

Public health experts reacted quickly to create a norovirus web page and use social media to teach people how to protect themselves from norovirus infection. Many people visited the web page through a mobile Facebook app. Prevention tips were also posted on the Department of Health’s Facebook and Twitter pages. The Department of Health’s social network is popular, reaching a total network of more than 400,000 Facebook users when friends of fans are included. There are 1,360 followers on Twitter. “Getting the word out using social media is a modern way to share disease prevention messages, especially about the importance of hand washing in reducing the spread of norovirus,” said Kim Quinn, Chief of the Outbreak Response and Bioterrorism Investigation Team. The best ways to help prevent the spread of norovirus are to practice proper hand washing, disinfect surfaces, and avoid caring for others or preparing food when sick.