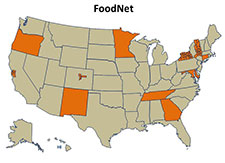 In 2012, CDC scientists monitored between 16 and 57 potential food poisoning clusters each week and investigated more than 200 multistate clusters nationwide. Two of CDC’s food safety programs partner with 15 jurisdictions to get ahead of stubborn foodborne outbreaks: FoodCORE and FoodNet.

What is the difference between FoodCORE and FoodNet?

FoodCORE is one of the newest and most promising programs at CDC. Seven FoodCORE centers, covering about 14% of the US population, work together to develop new and better methods to detect, investigate, respond to, and control multistate outbreaks of foodborne diseases.

FoodNet, established in 1996, is an active population- based surveillance system that collects information in 10 states and covers 15% of the US population. It estimates the number of foodborne illnesses, monitors trends in incidence of specific foodborne illnesses over time, attributes illnesses to specific foods and settings, and disseminates this information. One of the states where these two programs overlap is in Connecticut.

How do FoodCORE and FoodNet work together in Connecticut?

FoodCORE and FoodNet work together seamlessly and they complement each other’s missions. Since becoming a FoodCORE center in January 2012, Connecticut has been able to quickly and easily acquaint itself with the program. In part, this is a result of the existing infrastructure already in place through FoodNet and a 17-year collaborative effort between the Connecticut Department of Public Health (DPH) and Yale School of Public Health.

Quyen Phan, an epidemiologist with the Connecticut DPH, commented that “the existing partnership between DPH and Yale paved the way for rapid formation of a student interview team composed of Yale public health students. After our first year, we have seen over 80% of Salmonella cases interviewed compared with about 50% in previous years.”

FoodCORE and FoodNet enhance foodborne disease surveillance and outbreak detection and response in Connecticut by working cohesively without duplicating or replicating efforts. FoodNet Program Coordinator Sharon Hurd made the observation that “if not for FoodNet, FoodCORE might not have thrived in its first year as it has; conversely, if not for FoodCORE, FoodNet might not have continued to make the strides that it is known for in Connecticut.” These programs are now intertwined and will undoubtedly continue to serve one another to protect the health of Connecticut’s residents.