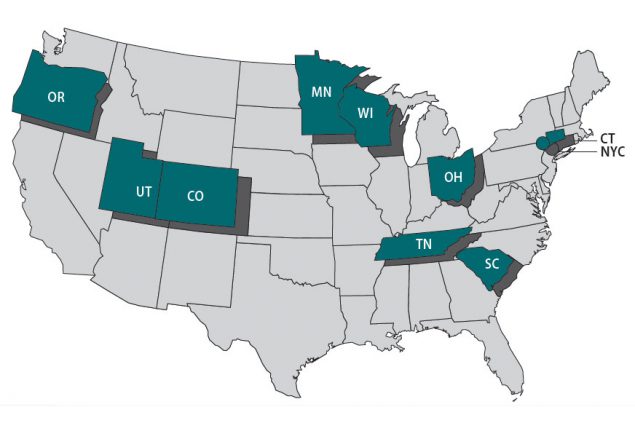 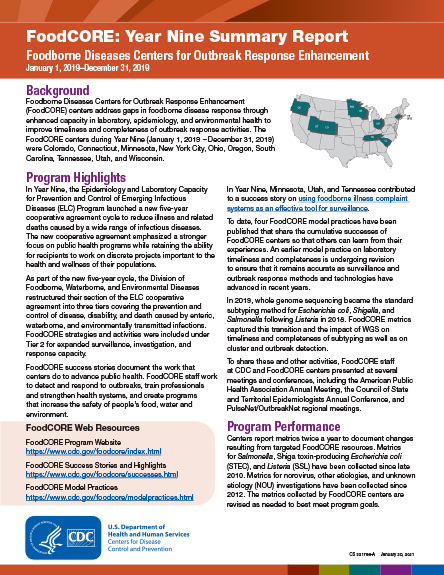 In Year Nine, the Epidemiology and Laboratory Capacity for Prevention and Control of Emerging Infectious Diseases (ELC) Program launched a new five-year cooperative agreement cycle to reduce illness and related deaths caused by a wide range of infectious diseases. The new cooperative agreement emphasized a stronger focus on public health programs while retaining the ability for recipients to work on discrete projects important to the health and wellness of their populations.

As part of the new five-year cycle, the Division of Foodborne, Waterborne, and Environmental Diseases restructured their section of the ELC cooperative agreement into three tiers covering the prevention and control of disease, disability, and death caused by enteric, waterborne, and environmentally transmitted infections. FoodCORE strategies and activities were included under Tier 2 for expanded surveillance, investigation, and response capacity.

FoodCORE success stories document the work that centers do to advance public health. FoodCORE staff work to detect and respond to outbreaks, train professionals and strengthen health systems, and create programs that increase the safety of people’s food, water and environment. In Year Nine, Minnesota, Utah, and Tennessee contributed to a success story on using foodborne illness complaint systems as an effective tool for surveillance.

To date, four FoodCORE model practices have been published that share the cumulative successes of FoodCORE centers so that others can learn from their experiences. An earlier model practice on laboratory timeliness and completeness is undergoing revision to ensure that it remains accurate as surveillance and outbreak response methods and technologies have advanced in recent years.

In 2019, whole genome sequencing became the standard subtyping method for Escherichia coli, Shigella, and Salmonella following Listeria in 2018. FoodCORE metrics captured this transition and the impact of WGS on timeliness and completeness of subtyping as well as on cluster and outbreak detection. To share these and other activities, FoodCORE staff at CDC and FoodCORE centers presented at several meetings and conferences, including the American Public Health Association Annual Meeting, the Council of State and Territorial Epidemiologists Annual Conference, and PulseNet/OutbreakNet regional meetings.

Centers report metrics twice a year to document changes resulting from targeted FoodCORE resources. Metrics for Salmonella, Shiga toxin-producing Escherichia coli (STEC), and Listeria (SSL) have been collected since late 2010. Metrics for norovirus, other etiologies, and unknown etiology (NOU) investigations have been collected since 2012. The metrics collected by FoodCORE centers are revised as needed to best meet program goals.

Since Year 6, FoodCORE centers have increased the proportion of Salmonella, STEC, and Listeria primary isolates with WGS results.

In Year 9, centers conducted 64 SSL and 194 NOU* environmental health assessments as part of investigations where there was a link to a common location of exposures. Environmental health assessments provide information needed to recommend effective short and long-term interventions that stop ongoing foodborne outbreaks and prevent them in the future.

*Only foodborne and point-source investigations are reported for NOU metrics.

From Year 8 to Year 9, FoodCORE centers decreased the time† from receipt (or recovery) at WGS laboratory to sequence being shared with national database.

In Year 9, the time† to attempt and complete interviews for Salmonella, STEC, and Listeria was under 2 days and 4 days, respectively.

The average proportion of Salmonella, STEC, and Listeria confirmed cases with an attempted interview with exposure history obtained was 84%, 90%, and 87%, respectively.

FoodCORE centers have demonstrated that targeted investments can improve the completeness and timeliness of outbreak response activities. They have strengthened their outbreak response programs to conduct faster, better, and more complete investigations, to ultimately help stop the spread of enteric diseases.