Going the Distance: Tennessee and Colorado Successfully Collaborate Despite being Miles Apart

Strong collaboration was key for the Colorado and Tennessee FoodCORE centers when investigating a Salmonella outbreak at a summer camp in Colorado. Collaboration is an important piece of the FoodCORE program. FoodCORE centers collaborate internally between laboratorians, epidemiologists, and environmental health specialists as well as externally with other centers and health departments.

In May 2015, a group of over 300 Tennessee residents traveled to a summer camp in Colorado. Upon returning to Tennessee, two campers were diagnosed with Salmonella infections, and their illnesses were reported to the Tennessee Department of Health. Tennessee investigators contacted the Colorado Department of Public Health and Environment after they learned that these campers had traveled to Colorado, which started a joint outbreak investigation between the geographically distant states.

The two states combined their resources to determine the source of the outbreak. Epidemiologists in Tennessee distributed online surveys to both sick and healthy campers to assess illnesses and exposures while epidemiologists in Colorado conducted in-person interviews of camp staff. Environmental health specialists in Colorado conducted an environmental assessment of the camp facilities, including the collection of environmental, food, and water samples for testing. These samples, along with stool samples from camp staff, were tested at the Colorado state public health laboratory for the germ that was making people sick.

Despite their best efforts, they could not determine the source of this outbreak, which made nearly 40 people sick. The case-control studies (see definition on the right) could not pinpoint a specific exposure, and the environmental and water samples tested negative for Salmonella. A sample of chicken meat collected during the environmental assessment tested positive for Salmonella, but after further testing using an advanced laboratory method, it was not clear that the chicken meat was contaminated with the same strain of Salmonella that made people sick.

During their interviews, Colorado epidemiologists learned that a staff member had severe diarrhea a few days before the outbreak began. This individual worked in the camp kitchen and could have spread the germ to others when preparing or serving food; however, a stool sample was not collected when the staff member was ill, so this idea was not confirmed with laboratory tests. Several other staff members, including some who worked in the kitchen, tested positive for Salmonella. These workers were not allowed to work with food until they were no longer infected with and capable of spreading Salmonella. Although the source was not identified definitively, the Colorado health department spent many hours educating camp staff about proper food handling and the importance of following rules for sick workers. Time spent educating staff will likely prevent outbreaks in the future. 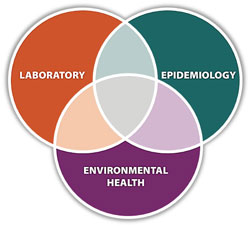 What is a case-control study?

When the epidemiologists in Colorado and Tennessee collected exposure information from ill and well people, they were conducting case-control studies. Investigators conduct case-control studies to determine if an exposure, such as food or water, is associated with an outcome, such as illness. 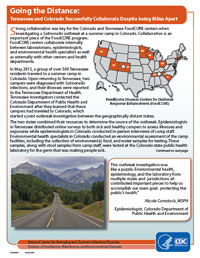