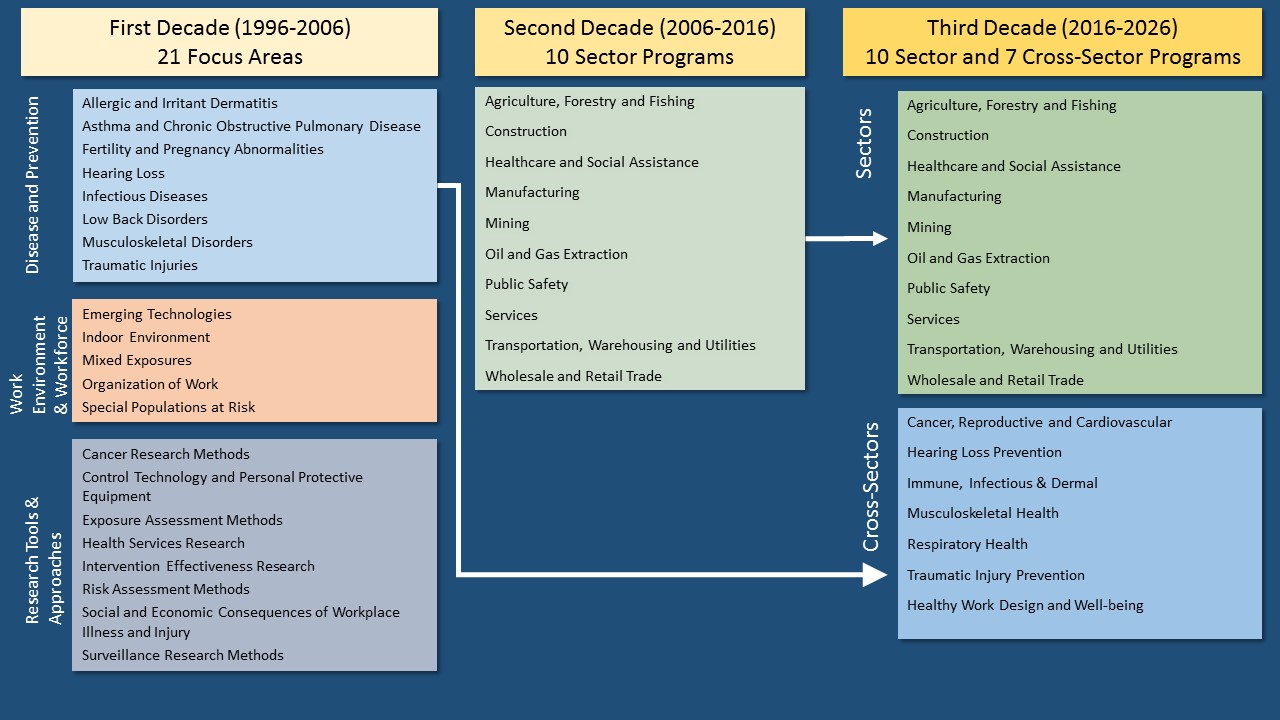 Each decade of NORA has been grounded in fundamental questions that characterized the challenges of the time and helped guide the structure and purpose of that 10-year cycle.

In the first decade, the guiding questions were; “What will the workplace of 2006 look like?  What research will be needed to ensure a safe and healthy workplace?”  To respond to these challenges, the first decade of NORA was organized into 21 focus areas that prioritized occupational safety and health research for NIOSH and the nation. NORA became a map by which the occupational safety and health community could identify, generate, design and fund priority research efforts.  By the time the first decade was launched, more than 500 individuals and organizations had contributed to the development of NORA. No previous occupational research agenda had captured such broad input.

In the second decade, NORA was challenged to understand how we could better move research into practice in the workplace. The response was the development of sectors that would serve as the conduit to the working population in the United States. These 10 sectors were organized around the 20 business sectors defined by the North American Industry Classification System (NAICS) codes and organized into groups (initially eight, then 10) based on their similarities with workplace safety and health issues. During this decade, NIOSH organized 10 intramural sector programs and 24 intramural cross-sector programs to support NORA goals and priorities.

The third decade of NORA faces slightly different challenges that ask “What research should we be doing in 2020 and beyond? Can an efficient and effective structure be found to identify and integrate research priorities?” The third decade of NORA continues with the 10 sectors whose aim is to prioritize occupational safety and health research by major areas of the US economy.  In addition, there are seven cross-sectors whose aim is to identify national occupational health research priorities according to the major issues affecting the US working population. Six of the cross-sector also represent many of the focus areas under the Disease and Prevention category of the first decade. The seventh cross-sector, Healthy Work Design and Well-being, includes the contributions of three NIOSH cross-sector programs from the second decade: Work Organization and Stress Disorders, Economics and Total Worker Health®.