Ross and the Discovery that Mosquitoes Transmit Malaria Parasites

Sir Ronald Ross was born in Almora, India in 1857 to Sir C.C.G. Ross, a General in the Indian Army, and his wife Matilda. At the age of eight, he was sent to England to be educated and spent much of his childhood with an aunt and uncle on the Isle of Wight. During his early years he developed interests in poetry, literature, music, and mathematics, all of which he continued to engage in for the rest of his life.

Although he had no predisposition to medicine, at the age of 17 he submitted to his father’s wish to see him enter the Indian Medical Service. He began his medical studies at St. Bartholomew’s Hospital Medical College, London in 1874 and sat the examinations for the Royal College of Surgeons of England in 1879. He took the post of ship surgeon on a transatlantic steamship while studying for, and gaining the Licentiate of the Society of Apothecaries, which allowed him to enter the Indian Medical Service in 1881, where he held temporary appointments in Madras, Burma, and the Andaman Islands. During a year’s leave, from June 1888 to May 1889, he developed his scientific interests and studied for the Diploma in Public Health from the Royal Colleges of Physicians and Surgeons in England and took a course in bacteriology under Professor E. E. Klein. He also married Miss Rosa Bloxam, who accompanied him to Bangalore when he returned for duty as a staff surgeon. 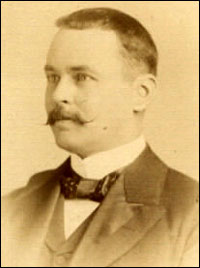 In 1892 he became interested in malaria and, having originally doubted the parasites’ existence, became an enthusiastic convert to the belief that malaria parasites were in the blood stream when this was demonstrated to him by Patrick Manson during a period of home leave in 1894. (Sir Patrick Manson is considered by many to be the father of tropical medicine. He was the first person to demonstrate, in 1878, that a parasite that causes human disease could infect a mosquito—in this case, the filarial worm that causes elephantiasis. He was also physician to the Seamen’s Hospital Society, the Medical Advisor to the Colonial Office, and later the founder of the London School of Tropical Medicine and the Hong Kong College of Medicine.) 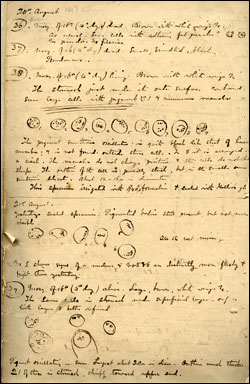 Page from notebook where Sir Ronald Ross records his discovery of the mosquito transmission of malaria, 20 August 1897. (Courtesy: London School of Hygiene and Tropical Medicine)

On his return to India in 1895, Ross began his quest to prove the hypothesis of Alphonse Laveran and Manson that mosquitoes were connected with the propagation of malaria, and regularly corresponded with Manson on his findings. However his progress was hampered by the Indian Medical Service, which ordered him from Madras to a malaria-free environment in Rajputana. Ross threatened to resign but, following representations on his behalf by Manson, the Indian Government put him on special duty for a year to investigate malaria and kala azar (visceral leishmaniasis).

On 20 August 1897, in Secunderabad, Ross made his landmark discovery. While dissecting the stomach tissue of an anopheline mosquito fed four days previously on a malarious patient, he found the malaria parasite and went on to prove the role of Anopheles mosquitoes in the transmission of malaria parasites in humans.

He continued his research into malaria in India, using a more convenient experimental model, malaria in birds. By July 1898, he had demonstrated that mosquitoes could serve as intermediate hosts for bird malaria. After feeding mosquitoes on infected birds, he found that the malaria parasites could develop in the mosquitoes and migrate to the insects’ salivary glands, allowing the mosquitoes to infect other birds during subsequent blood meals.

In 1899 Ross resigned from the Indian Medical Service and returned to England. He worked for the newly established Liverpool School of Tropical Medicine , taking a post as lecturer and later becoming Professor of Tropical Medicine, and accepted a personal chair in Tropical Sanitation at Liverpool University. One of his first roles at the School was to investigate and devise anti-malaria schemes in West Africa. This was the first of many expeditions that Ross undertook to investigate and develop malaria control measures including visits to Ismailia in Egypt at the request of the Suez Canal Company in 1902, Panama in 1904, Greece in 1906, and Mauritius in 1907-1908.

In 1901 Ross was elected a Fellow of the Royal College of Surgeons of England and also a Fellow of the Royal Society, of which he became Vice-President from 1911 to 1913. In 1902 he was awarded the Nobel Prize for Medicine “for his work on malaria, by which he has shown how it enters the organism and thereby has laid the foundation for successful research on this disease and methods of combating it.” In 1902 he was appointed a Companion of the Most Honourable Order of Bath by His Majesty the King of Great Britain, and in 1911 he was elevated to the rank of Knight Commander of the same Order. He received an honorary M.D. degree in Stockholm at the centenary celebration of the Karolinska Institute in 1910 and was awarded honorary membership of many learned societies around the world throughout his career.

In 1926 the Ross Institute and Hospital for Tropical Diseases was opened on Putney Heath, London by the Prince of Wales as a memorial to and in recognition of Ross’ work. The main focus of the Institute was the study of the nature and treatment, propagation, and prevention of tropical diseases. Ross assumed the post of Director in Chief, which he held until his death in 1932. The Institute was incorporated into the London School of Hygiene & Tropical Medicine in 1934. 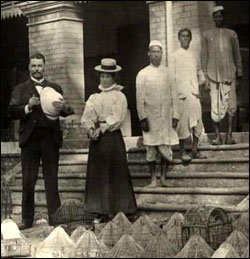 Sir Ronald Ross, Mrs. Ross, Mahomed Bux and laboratory assistants at the laboratory in Calcutta where the life history of the malaria parasite in birds was fully worked out in 1898. (Courtesy: London School of Hygiene and Tropical Medicine)

Ross wrote extensively on malaria including his book The Prevention of Malaria in 1911 and on other topics including mathematics. He also wrote a number of novels including The Child of the Ocean, Spirit of the Storm, and The Revels of Orsera. 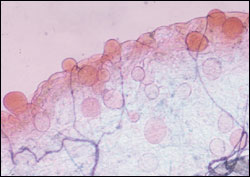 Oocysts stages of malaria parasites developing in the walls of a mosquito midgut (stomach). The midgut is in the lower half of the image, and the oocysts appear as multiple spheres embedded in the midgut’s wall. Such oocysts were seen, for the first time, by Sir Ronald Ross on 20 August 1897.

In 1928, Ross advertised his papers for sale inScience Progress,making it known that he needed the money for the provision of his wife and family. They were bought by Lady Houston for £2000, who offered them to the British Museum. They refused the collection, partly due to Ross’ stipulation that his arrangement of the papers had to be retained and also due to some canvassing from members of the Ross Institute who thought that the collection would be better placed with them. These papers, the majority of which are now held by the London School of Hygiene & Tropical Medicine, are currently being preserved and catalogued according to archival standards through funding from the Wellcome Trust . The Ross collection includes correspondence on the mosquito-malaria theory with many individuals including Sir Patrick Manson, Charles Alphonse Laveran, William Crawford Gorgas, and Joseph Lister; notebooks containing details of his scientific research; manuscripts and published articles on malaria and other diseases; material on Ross’ dispute with Italian scientists over the mosquito-malaria theory; and records of Ross’ expeditions overseas to develop and implement mosquito control measures. The catalogue of the collection is available to search on the London School of Hygiene & Tropical Medicine Web site .

While Ross is remembered for his malaria work, this remarkable man was also a mathematician, epidemiologist, sanitarian, editor, novelist, dramatist, poet, amateur musician, composer, and artist. He died, after a long illness, at the Ross Institute on 16 September 1932.

“…With tears and toiling breath,
I find thy cunning seeds,
O million-murdering Death.”

(fragment of poem by Ronald Ross, written in August 1897, following his discovery of malaria parasites in anopheline mosquitoes fed on malaria-infected patients)

Images contributed by the Library and Archives, London School of Hygiene & Tropical Medicine.