The control of malaria was vital for the construction of the Panama Canal. The discovery by Major Ronald Ross that malaria was transmitted by mosquitoes had tremendous impact on development programs in the tropics. One of the first of these was the construction of the Panama Canal, which began within a few years after Dr. Ross’s discovery. During the American occupation of Havana, Cuba, regulations were put into effect by the United States Army for the control of yellow fever that consisted of the screening of houses and extensive drainage to reduce breeding of mosquitoes. Not only was yellow fever eliminated, but malaria transmission was also greatly reduced. Work in Havana was under the direction of Surgeon Major W. C. Gorgas.

In 1904, the Isthmian Canal Commission, accompanied by Col. W. C. Gorgas, Medical Corps, U. S. Army, John W. Ross, Medical Director, U. S. Navy, Capt. C. E. Gillette, Corps of Engineers, U. S. Army, and Maj. Louis A. LaGarde, Medical Corps, U. S. Army, as experts on sanitation inspected the potential site of construction. These experts prepared a plan for the sanitation of the Canal Zone and the cities of Panama and Colon. On June 30, 1904, the Sanitary Department was formed with Colonel Gorgas as its head.

The Isthmus of Panama was an ideal environment for mosquitoes. The high temperature varies little during the year. The rainy season lasts for nine months and the interior of the Isthmus is tropical jungle, ideal for mosquito breeding. The Panama Canal extends diagonally across the Isthmus of Panama from south-east to north-west, a distance of 42 miles from shore to shore. At Panama, the antimalarial work was principally rural, located for 47 miles along the line of the railroad between Panama and Colon. The population was about 80,000 living within half a mile of the railroad and occupying some 30 villages and camps or isolated houses. Malaria was so abundant that in Colon, it was estimated that one-sixth of the population was suffering from malarial attacks during each week.

An integrated program of mosquito control was initiated that involved seven basic programs that were strictly enforced. These were, in order of importance: 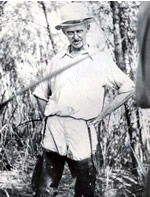 The Panama Canal was the construction miracle of the beginning of the 20th century. It also was a great demonstration of malaria control based on an integrated mosquito control program enforced by the military. Malaria was not eliminated. However, under these most trying conditions, the disease was controlled to the extent that the construction work could be completed.

Drs. Gorgas, LePrince, and Darling are remembered as pioneers for their leadership in the control of malaria during this period. The Gorgas Memorial Laboratory in Panama, named after Col. Gorgas, remained a leading research center for tropical disease research throughout the 20th century. The American Society of Tropical Medicine and Hygiene every 3 years awards the Joseph Augustin LePrince Medal in recognition of outstanding work in the field of malariology. Professor Darling is honored by the Darling medal and prize, which is awarded by the Darling Foundation for outstanding achievements in the pathology, etiology, epidemiology, therapy, prophylaxis, or control of malaria. An examination of references 2, 3, and 5 will give details of the work of these pioneer malariologists in the control of malaria in the construction of the Panama Canal.