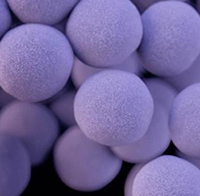 What is Staph food poisoning?

About 25% of people and animals have Staph on their skin and in their nose. It usually does not cause illness in healthy people, but Staph has the ability to make toxins that can cause food poisoning.

How do people get Staph food poisoning? 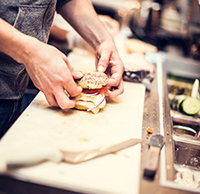 People who carry Staph can contaminate food if they don’t wash their hands before touching it. If food is contaminated with Staph, the bacteria can multiply in the food and produce toxins that can make people ill. Staph bacteria are killed by cooking, but the toxins are not destroyed and will still be able to cause illness.

Foods that are not cooked after handling, such as sliced meats, puddings, pastries, and sandwiches, are especially risky if contaminated with Staph.

Food contaminated with Staph toxin may not smell bad or look spoiled.

What are the symptoms of Staph food poisoning?

How do I know if I have Staph food poisoning?

You can suspect Staph food poisoning based on the type of symptoms and their fast resolution. Although laboratory tests can detect toxin-producing Staph in stool, vomit, and foods, these tests are usually not ordered except during an outbreak. If you think you might have Staph food poisoning and are experiencing severe symptoms, contact your health care provider.

How is Staph food poisoning treated?

The most important treatment is drinking plenty of fluids. Your healthcare provider may give you medicine to decrease vomiting and nausea. People with severe illness may require intravenous fluids.

Antibiotics are not useful in treating this illness because the toxin is not affected by antibiotics.

How can I prevent Staph food poisoning?

The best way to avoid food poisoning by Staph is to prevent food from being held at an unsafe temperature (between 40°F and 140°F) for more than 2 hours.

Bacteria can multiply rapidly if left at room temperature or in the “Danger Zone” between 40°F and 140°F. Never leave perishable food out for more than 2 hours (or 1 hour if it’s hotter than 90°F outside).

The following tips that are part of the four steps to food safety – clean, separate, cook, and chill – also can help protect you and your loved ones from food poisoning: