On June 30, 2022, CDC announced that Director Rochelle P. Walensky adopted the Decision memo approving the ACIP vote for a preferential recommendation for the use of higher dose (including high dose and recombinant) or adjuvanted flu vaccines over standard-dose unadjuvanted flu vaccines for adults 65 years and older. CDC’s full recommendations for the use of flu vaccines during 2022-2023 will appear in a forthcoming Morbidity and Mortality Weekly Report. Edits to this page are also forthcoming. More information can be found online: CDC Director Adopts Preference for Specific Flu Vaccines for Seniors

What is a flu vaccine?

Influenza (flu) vaccines (often called “flu shots”) are vaccines that protect against the four influenza viruses that research indicates most common during the upcoming season. Most flu vaccines are “flu shots” given with a needle, usually in the arm, but there also is also a nasal spray flu vaccine.

The composition of flu vaccines has been updated for the 2021-2022 flu season.

Is there more than one type of flu shot available?

Yes. There are different flu vaccine manufacturers and multiple influenza vaccine products licensed and recommended for use in the United States.

Who should and who should not get a flu vaccine?

Everyone 6 months of age and older should get an influenza (flu) vaccine every season with rare exception. CDC’s Advisory Committee on Immunization Practices has made this recommendation since the 2010-2011 flu season.

Vaccination to prevent flu and its potentially serious complications is particularly important for people who are at higher risk of developing serious flu complications. See People at Higher Risk of Developing Flu-Related Complications for a full list of age and health factors that confer increased risk.

More information is available at Who Needs a Flu Vaccine.

Different influenza (flu) vaccines are approved for use in people in different age groups. In addition, some vaccines are not recommended for certain groups of people. Factors that can determine a person’s suitability for vaccination, or vaccination with a particular vaccine, include a person’s age, health (current and past) and any allergies to flu vaccine or its components. For more information, visit Who Should and Who Should NOT get a Flu Vaccine.

How effective is the seasonal flu shot?

Influenza (flu) vaccine effectiveness (VE) can vary. The protection provided by a flu vaccine varies from season to season and depends in part on the age and health status of the person getting the vaccine and the similarity or “match” between the viruses in the vaccine and those in circulation. During years when the flu vaccine match is good, it is possible to measure substantial benefits from flu vaccination in terms of preventing flu illness and complications. However, the benefits of flu vaccination will still vary, depending on characteristics of the person being vaccinated (for example, their health and age), what influenza viruses are circulating that season and, potentially, which type of flu vaccine was used. For more information, see Vaccine Effectiveness – How well does the Flu Vaccine Work. For information specific to this season, visit About the Current Flu Season.

Flu VISs are no longer updated every year. The edition dated 8/15/2019 should be used for the current flu season. 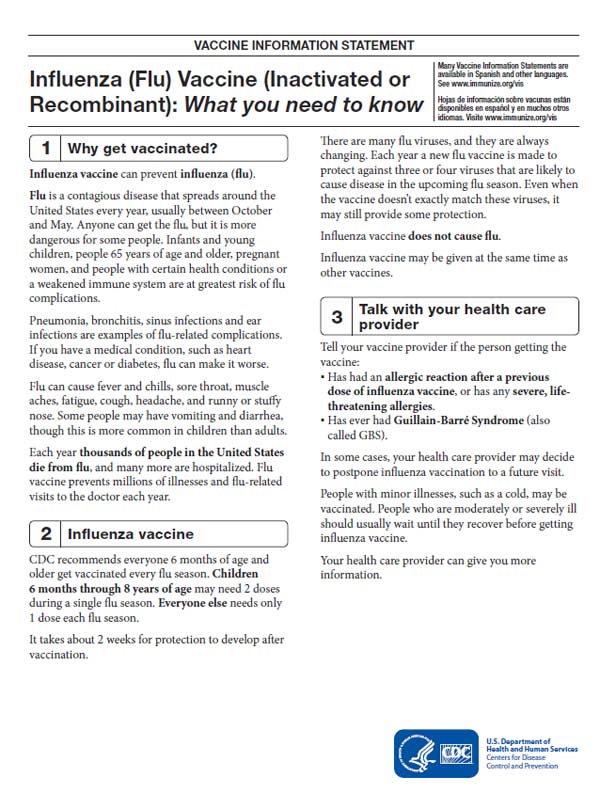 There are many reasons to get an influenza (flu) vaccine each year. Flu vaccination is the best way to protect yourself and your loved ones against flu and its potentially serious complications.

Below is a summary of the benefits of flu vaccination and selected scientific studies that support these benefits.

Despite the many benefits offered by flu vaccination, only about half of Americans get an annual flu vaccine and flu continues to cause millions of illnesses, hundreds of thousands of hospitalizations and tens of thousands of deaths. Many more people could be protected from flu if more people got vaccinated.

*References for the studies listed above can be found at Publications on Influenza Vaccine Benefits. Also, see the A Strong Defense Against Flu: Get Vaccinated! fact sheet.

What are the side effects that could occur?

Common side effects from a flu shot include soreness, redness, and/or swelling where the shot was given, headache (low grade), fever, nausea, muscle aches, and fatigue. The flu shot, like other injections, can occasionally cause fainting.

Life-threatening allergic reactions to flu shots are very rare. Signs of serious allergic reaction can include breathing problems, hoarseness or wheezing, hives, paleness, weakness, a fast heartbeat, or dizziness. If they do occur, it is usually within a few minutes to a few hours after receiving the shot. These reactions can occur among persons who are allergic to something that is in the vaccine, such as egg protein or other ingredients. While severe reactions are uncommon, you should let your doctor, nurse, clinic, or pharmacist know if you have a history of allergy or severe reaction to influenza vaccine or any part of flu vaccine.

There is a small possibility that flu vaccine could be associated with Guillain-Barré syndrome, generally no more than 1 or 2 cases per million people vaccinated. This is much lower than the risk of severe complications from flu, which can be prevented by flu vaccine.

What should I do if I have had a serious reaction to seasonal flu vaccine?

Call a doctor or get to a doctor right away.

Tell your doctor what happened, the date and time it happened, and when you got the flu shot.

Why do some people not feel well after getting a flu shot?

Flu vaccine side effects are generally mild and go away on their own within a few days. Some side effects that may occur from a flu shot include soreness, redness, and/or swelling where the shot was given, headache (low grade), fever, nausea, muscle aches, and fatigue. The flu shot, like other injections, can occasionally cause fainting.

What about people who get a seasonal flu vaccine and still get sick with flu symptoms?

There are several reasons why someone might get flu symptoms, even after they have been vaccinated against flu.

What protection does a flu vaccine provide if I do get sick with flu?

In addition, it’s important to remember that flu vaccine protects against three or four different viruses and multiple viruses usually circulate during any one season. For these reasons, CDC continues to recommend flu vaccination for everyone 6 months and older even if vaccine effectiveness against one or more viruses is reduced.

People with egg allergies can receive any licensed, recommended age-appropriate influenza vaccine (IIV4, RIV4, or LAIV4) that is otherwise appropriate. People who have a history of severe egg allergy (those who have had any symptom other than hives after exposure to egg) should be vaccinated in a medical setting, supervised by a health care provider who is able to recognize and manage severe allergic reactions. Two completely egg-free (ovalbumin-free) flu vaccine options are available: quadrivalent recombinant vaccine and quadrivalent cell-based vaccine.

Flu VISs are no longer updated every year. The edition dated 8/15/19 should be used for the current flu season.