On December 14, 2022, CDC released a Health Alert Network (HAN) to provide guidance for prioritizing flu antivirals for treatment of flu.

The information on this page should be considered current for the 2022-2023 influenza season for clinical practice regarding the use of influenza antiviral medications. Clinicians may also wish to consult the IDSA antiviral treatment and antiviral chemoprophylaxis recommendations, and the ATS-IDSA Adult CAP Guidelines.

Antiviral treatment is recommended as soon as possible for any patient with suspected or confirmed influenza who:

Clinicians can consider early empiric antiviral treatment of non-high-risk outpatients with suspected influenza [e.g., influenza-like illness (fever with either cough or sore throat)] based upon clinical judgement, if treatment can be initiated within 48 hours of illness onset.

Co-circulation of Influenza Viruses and SARS-CoV-2

Antiviral medications with activity against influenza viruses are an important adjunct to influenza vaccine in the control of influenza.

*Note: Oral oseltamivir is the recommended antiviral for patients with severe, complicated, or progressive illness who are not hospitalized, and for hospitalized influenza patients.

Figure: Guide for considering influenza testing and treatment when influenza viruses are circulating in the community (regardless of influenza vaccination history)1 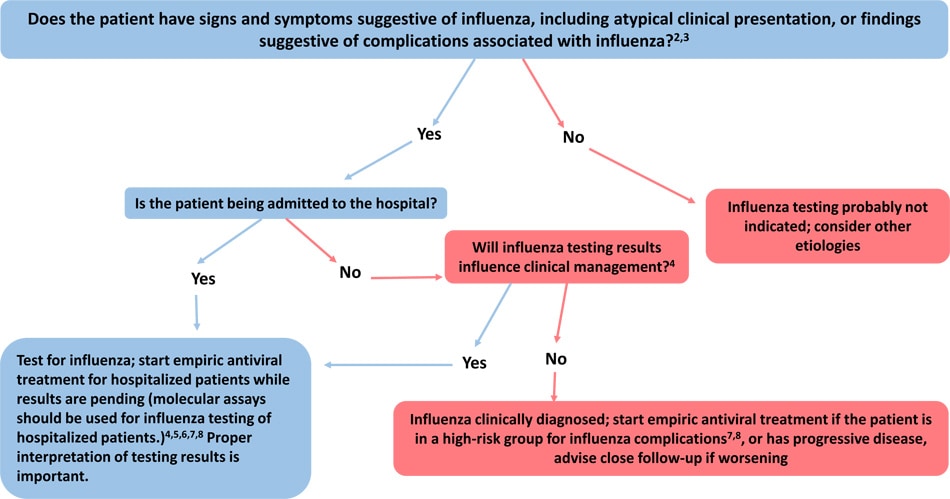 Complete footnotes for this algorithm are available.

Treatment of patients with severe influenza (e.g., those requiring hospitalization) presents multiple challenges. The effect of specific antiviral strategies in serious or life-threatening influenza is not established from clinical trials conducted to support licensure of oral oseltamivir, inhaled zanamivir, intravenous peramivir, or oral baloxavir, as those studies were conducted primarily among previously healthy outpatients with uncomplicated illness. No randomized, placebo-controlled clinical trials have been conducted of monotherapy with neuraminidase inhibitors for treatment of influenza in hospitalized patients. A secondary analysis of a multi-center unblinded clinical trial of oseltamivir treatment started within 24 hours of admission versus standard of care in adults hospitalized for lower respiratory tract infection reported that patients with laboratory-confirmed influenza had a significantly lower risk of clinical failure (composite outcome: failure to improve with 7 days, transfer to ICU care 24 hours after admission, or rehospitalization or death within 30 days) (Wiemken, 2021). Several observational studies in hospitalized influenza patients have shown clinical benefit of neuraminidase inhibitor antiviral treatment compared with no treatment, particularly when started within two days of influenza illness, or as soon as possible after hospital admission, including reducing the duration of hospitalization, and reducing the risk of invasive mechanical ventilation or risk of death (Hiba, 2011; Coffin, 2011; Viasus, 2011; Hsu, 2012; Louie, 2013; Muthuri, 2013; Muthuri, 2014; Miyakawa, 2019; Lytras, 2019; Campbell, 2021; Chen, 2020; Chen, 2020; Venkatesan, 2020; Katzen, 2019; Reacher, 2019).  In addition, some observational studies have reported that oral oseltamivir treatment started 4 and 5 days after illness onset in  patients hospitalized with suspected or confirmed influenza was  associated with lower risk for severe outcomes (EH Lee, 2010; N Lee, 2008; N Lee, 2010; Louie, 2012; McGeer, 2007; Siston, 2010), although one report found this benefit only in hospitalized adult patients in the ICU (Muthuri, 2014). A small number of observational studies and one meta-analysis of observational studies of hospitalized influenza patients reported that neuraminidase inhibitor treatment did not have survival benefit (Choi, 2017; Wolkewitz, 2016; Heneghan, 2016).

The following recommendations do not necessarily represent FDA-approved uses of antiviral products but are based on published observational studies and expert opinion and are subject to change as the developmental status of investigational products and the epidemiologic and virologic features of influenza change over time.

No dose adjustment is recommended for inhaled zanamivir for a 5-day course of treatment for patients with renal impairment. Pharmacokinetic analysis did not identify a clinically meaningful effect of renal function on the pharmacokinetics of baloxavir in patients with creatinine clearance 50 mL/min and above. The effects of severe renal impairment on the pharmacokinetics of baloxavir marboxil or its active metabolite, baloxavir, have not been evaluated.

Abbreviations: N/A = approved, not recommended
1 Renal dosing of oseltamivir is not available in the package insert for pediatric patients. However, these tables may be useful for children who qualify for adult doses based on weight >40 kg.
2 Assuming 3 hemodialysis sessions are performed in the 5- day period. Treatment can be initiated immediately if influenza symptoms develop during the 48 hours between hemodialysis sessions; however, the post-hemodialysis dose should still be administered independently of time of administration of the initial dose.
3 An initial dose can be administered prior to the start of dialysis.
4 Data derived from studies in continuous ambulatory peritoneal dialysis (CAPD) patients.
5 Renal dosing from peramivir package insert is available for pediatric patients: Creatinine clearance ≥50 mL/min: 12 mg/kg (up to maximum dose of 600 mg); Creatinine clearance 30 to 49 mL/min: 4 mg/kg; Creatinine clearance 10 to 29 mL/min: 2 mg/kg. 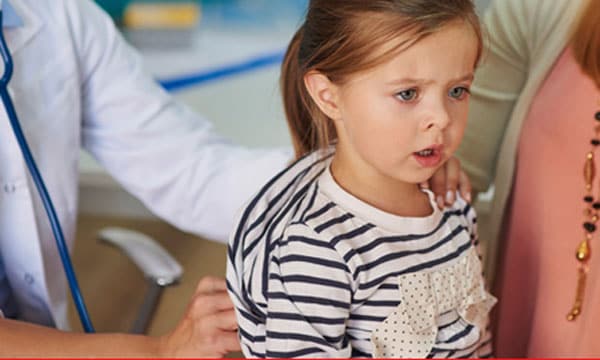 More information for clinicians on influenza diagnostic testing is available. 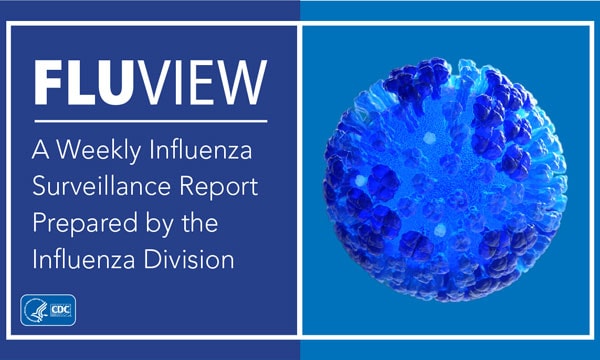 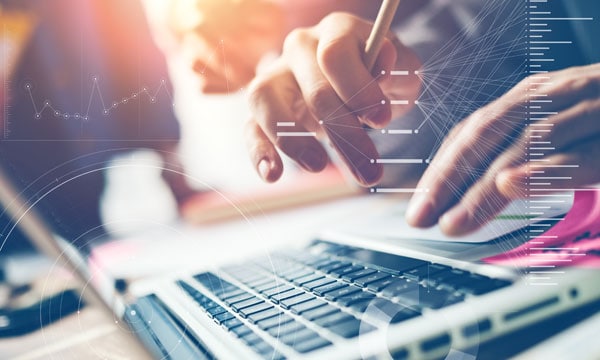 A more complete list of influenza antiviral references is available.