Español | Other Languages | Print
Related Pages
On This Page

For the past several years, CDC has used a mathematical model to estimate the numbers of influenza illnesses, medical visits, hospitalizations, and deaths (1-4). The methods used to calculate the estimates have been described previously (1-2). CDC uses the estimates of the burden of flu in the population to inform policy and communications related to influenza prevention and control.

Since the emergence of SARS-CoV-2, influenza activity has been lower than observed before the pandemic. Compared with influenza seasons prior to pandemic, the 2021–2022 influenza season was mild and occurred in two waves, with a higher number of hospitalizations in the second wave. Influenza activity in the United States during the 2021–2022 season began to increase in November, declined in January 2022, increased again in March 2022 and remained elevated until mid-June 2022.  The season was characterized by two distinct waves and predominately influenza A virus circulation. Overall, influenza A(H3N2) viruses were the most commonly detected influenza viruses this season. The 2021-22 season is described as having low severity**; however, the effect of influenza differed by age group and the severity of the season in some age groups was higher– hospitalization rates among older adults aged ≥65 years old were higher compared with other age groups (5).

CDC estimates that the burden of illness during the 2021–2022 season was low with an estimated 9 million people sick with flu, 4 million visits to a health care provider for flu, 100,000 hospitalizations for flu, and 5,000 flu deaths  (Table 1). The number of cases of influenza-associated illness, medically attended illnesses, hospitalizations, and deaths were the lowest since the 2011-2012 season which was the first full season following the influenza A(H1N1)pdm09 pandemic (6).  Adoption of mitigation measures intended to prevent the spread of COVID-19 may have also impacted the timing or severity of influenza activity during the 2021-2022 season.

CDC’s estimates of hospitalizations and mortality associated with the 2021–2022 influenza season show that despite the co-circulation of SARS-CoV-2 and other respiratory viruses, influenza viruses do still cause severe disease and death. Older adults accounted for 83% of deaths, which is similar to recent seasons before the COVID-19 pandemic. These findings continue to highlight the fact that older adults are particularly vulnerable to severe disease with influenza virus infection and that influenza prevention measures such as vaccination are important to reducing the impact of the seasonal epidemics on the population and healthcare system.

Deaths in children with laboratory-confirmed influenza virus infection have been a reportable disease in the United States since 2004; 39 deaths were reported for the 2021-22 season as of September 24, 2022. Although it is possible that reported deaths may under-estimate the true number of deaths for this age group, no deaths in children (aged <18 years) were observed through the Influenza Hospital Surveillance Network (FluSurv-NET) during the 2021-2022 influenza season. As a result, it was not possible to estimate deaths in this age group.

During the 2021-2022 influenza season, CDC estimates that influenza was associated with 9 million illnesses, 4 million medical visits, 10,000 hospitalizations, and 5,000 deaths. The influenza burden was similar to the burden observed during the 2011-2012 season.

** Some parameters for evaluation influenza season severity were updated staring in 2021-22. More information is available.

First, rates of influenza-associated hospitalizations include data reported to the Influenza Hospitalization Surveillance Network (FluSurv–NET) through September 30, 2022. Final case counts may differ slightly as further data cleaning from the 2021-2022 season are conducted by FluSurv–NET sites. The most updated crude rates of hospitalization for FluSurv-NET sites will be available on FluView Interactive.

Second, national rates of influenza-associated hospitalizations and in-hospital death were adjusted for the frequency of influenza testing and the sensitivity of influenza diagnostic assays, using a multiplier approach (3). However, data on testing practices during the 2021–2022 season were not available at the time of estimation. We adjusted rates using the lowest multiplier from any season from 2010–2011 through 2019–2020. These burden estimates from the 2021–2022 season will be updated later when data on contemporary testing practices become available.

Third, estimates of influenza-associated illness are made by multiplying the number of hospitalizations by the ratio of illnesses to hospitalizations; estimates of medical visits are made by a similar process.  These multipliers are based on data from a prior season; therefore, the burden estimates provided here may not be accurate if patterns of care-seeking changed and the multipliers used are not valid.

Fourth, our estimate of influenza-associated deaths relies on information about location of death from death certificates to calculate ratios of deaths occurring in the hospital to deaths occurring outside of the hospital by categories of causes of death.  However, death certificate data during the 2019–2020 season were not available at the time of estimation. We used death certification data from all influenza seasons from 2010–2011 through 2019–2020 where these data were available from the National Center for Health Statistics. To calculate these ratios, first we calculate the frequency of flu-related deaths reported from our FluSurv-NET surveillance system that have cause of death identified as pneumonia or influenza (P&I), other respiratory or cardiovascular (other R&C), or other non-respiratory, non-cardiovascular (non-R&C).  Next, to account for deaths occurring outside of a hospital, we use information from national death certificates to calculate the proportion of deaths from these causes that occur in and out of the hospital. Data to generate these frequencies were not available from the 2019–2020 season at the time of estimation, so we used the average frequencies of location of death for each of the cause categories from previous seasons, 2010–2011 through 2019–2020.

Fifth, estimates of burden were derived from rates of influenza-associated hospitalization, which is a different approach than the statistical models used in older CDC published reports. These differences make it difficult to directly compare our estimates for seasons since 2009 to those older reports, though the estimates from our current method are largely consistent with estimates produced with statistical models for similar years (8-11).  It is useful to keep in mind that direct comparisons to influenza disease burden decades ago are complicated by large differences in the age of the US population and the increasing number of adults aged ≥65 years. 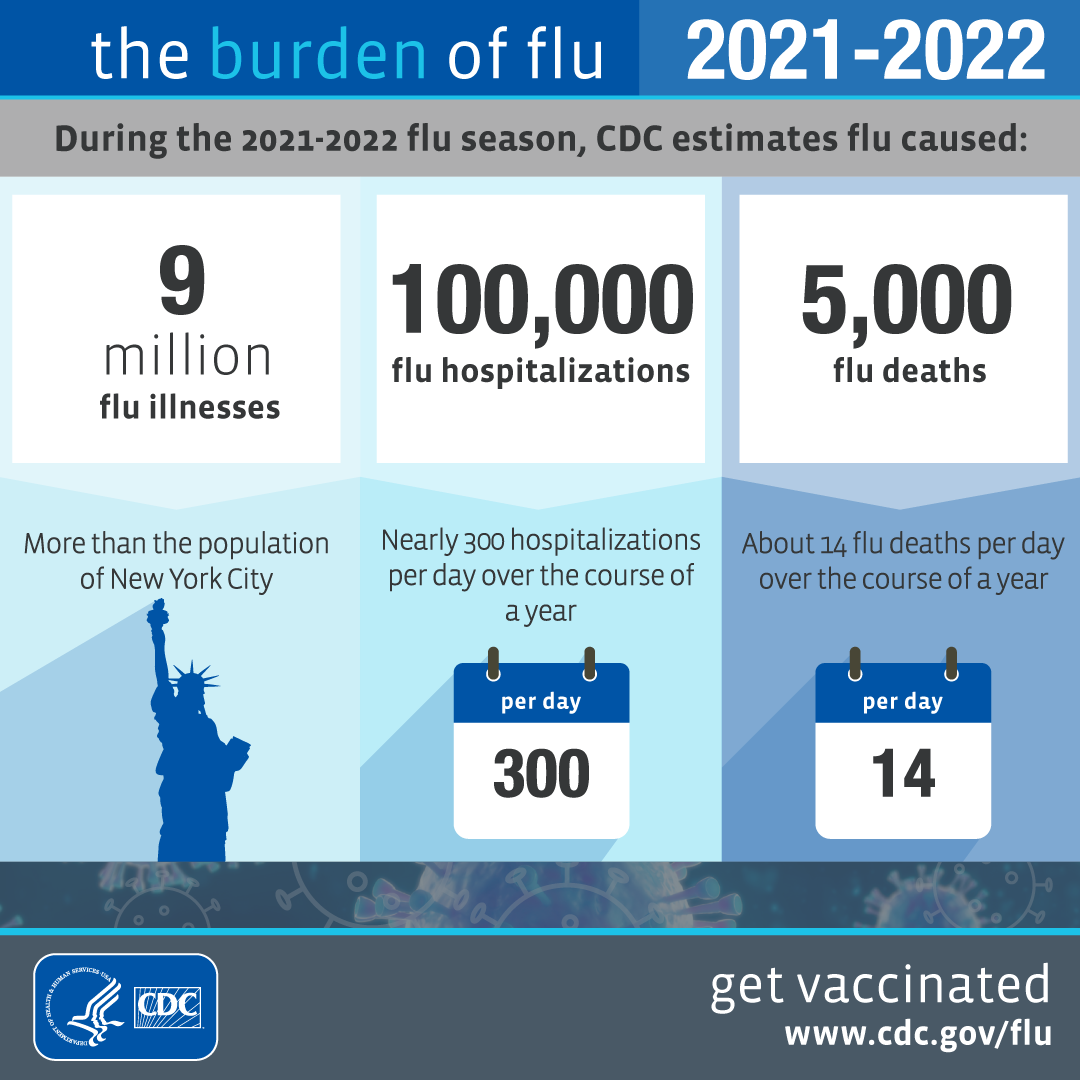