Instructions for the Automated Classification of the Initiating and Multiple Causes of Fetal Deaths,  2021

INSTRUCTIONS FOR THE AUTOMATED CLASSIFICATION OF THE INITIATING AND MULTIPLE CAUSES OF FETAL DEATHS,  2021

This manual provides instructions to NCHS mortality medical coders and nosologists for coding multiple causes of fetal death reported on the 2003 Revision of the Fetal Death Reports filed in the states. These mortality coding instructions are used by the National Center for Health Statistics (NCHS), which is the Federal agency responsible for the compilation of U.S. statistics on causes of fetal death. NCHS is part of the Centers of Disease Control and Prevention.

In coding causes of fetal death, NCHS refers to the World Health Organization’s most recent revision of the International Statistical Classification of Diseases and Related Health Problems (ICD-10) for processing the data for fetal mortality tabulation.

Beginning with fetal deaths occurring in 1999, ICD-10 has been used for coding and classifying causes of fetal death. This revision of the Classification is published by the World Health Organization (WHO) and consists of three volumes. Volume 1 contains a list of three-character categories, the tabular list of inclusions, and the four-character sub-categories. The supplementary Z code Classification appears in Volume 1 but is not used for classifying mortality cause of death data, including fetal deaths. Optional fifth characters are provided for certain categories and an optional independent four-character coding system is provided to classify histological varieties of neoplasm, prefixed by the letter M (for morphology) and followed by a fifth character indicating behavior. These optional codes are not used at NCHS. Volume 2 includes the international rules and notes used in classifying and tabulating cause of death data including fetal death data. Volume 3 is an alphabetical index containing a comprehensive list of terms and codes for use in coding. Copies of these volumes may be purchased. See ordering information at http://www.who.int/classifications/icd/en/.

Each year, all the major revisions from previous manuals will be documented in the Introduction of this manual under the heading “Major Revisions from Previous Manuals”.

This manual documents concepts and instructions for coding multiple causes of fetal death consistent with the provisions of ICD-10. This manual should be used in conjunction with the latest updated versions of ICD-10, Volumes 1 and 3 and the Perinatal Subset of medical terms. The Perinatal Subset is a list of terms classified to Chapter XVI, Certain conditions originating in the perinatal period (P00-P96). It is updated annually.

ICD-10 provides for the classification of certain medical conditions according to two different axes – the etiology or initiating disease process, referred to as the “dagger” code, and the manifestation or complication code, referred to as the “asterisk” code. NCHS uses and publishes only the dagger codes. This dual system was introduced in the Ninth Revision of the ICD and remained an integral part of the ICD-10.

For example, Coxsackie myocarditis has a code (B33.2†) marked with a “dagger” in Chapter 1, Certain infectious and parasitic diseases and a different code (I41.1*) marked with an “asterisk” in Chapter 9, Diseases of the circulatory system. NCHS only codes the B33.2. Similarly, diabetic nephropathy has a dagger code (E14.2†) in Chapter IV, Endocrine, nutritional and metabolic diseases and an asterisk code (N08.3*) in Chapter XIV, Diseases of the genitourinary system. NCHS only codes the E14.2.

The fetal death multiple cause codes are used as inputs to the ACME System (Automated Classification of Medical Entities) which was developed by NCHS to automatically select the underlying cause of death and the TRANSAX System (Translation of Axes) used to produce multiple cause of death statistics, beginning with deaths occurring in 1968. ACME will be used as the automated system for selecting the initiating cause of fetal deaths. The ACME System requires codes be assigned for each condition reported on the Fetal Death Report, usually in the order the information is recorded on the report. The output data of the system are the initiating causes of fetal deaths assigned by applying the underlying cause Selection Rule 3 and Modification Rules A-E of the Classification. These rules are documented in the ICD-10, Volume 2. The same cause is selected as if one applied the manual cause of fetal death coding instructions specified in Instruction Manual 2J, Instructions for the Manual Classification of the Initiating Cause of Fetal Deaths, 2012.

Other manuals relating to coding causes of death are:

Part 2a, NCHS Instructions for Classifying the Underlying Cause of Death,  2021

Part 2b, Instructions for Classifying Multiple Causes of Death,  2021

Fetal Death is defined as “death prior to the complete expulsion or extraction from its mother of a product of human conception, irrespective of the duration of pregnancy and which is not an induced termination of pregnancy. The death is indicated by the fact that after such expulsion or extraction, the fetus does not breathe or show any other evidence of life, such as beating of the heart, pulsation of the umbilical cord, or definite movement of voluntary muscles. Heartbeats are to be distinguished from transient cardiac contractions; respirations are to be distinguished from fleeting respiratory efforts or gasps.”

Induced Termination of Pregnancy (Abortion) is defined as “purposeful interruption of an intrauterine pregnancy with the intention other than to produce a liveborn infant and which does not result in a live birth.” This definition excludes management of prolonged retention of products of conception following fetal death.

Live Birth is defined as “the expulsion or extraction from its mother of a product of human conception, irrespective of the duration of the pregnancy, which, after such expulsion or extraction, breathes or shows any other evidence of life such as beating of the heart, pulsation of the umbilical cord, or definite movement of voluntary muscles, whether or not the umbilical cord has been cut or the placenta is attached. Heartbeats are to be distinguished from transient cardiac contractions; respirations are to be distinguished from fleeting respiratory efforts or gasps.” “

The U.S. Standard Report of Fetal Death provides spaces for a certifier to record pertinent information concerning the diseases, morbid conditions, and injuries which either resulted in or contributed to a fetal death. The CAUSE/CONDITIONS CONTRIBUTING TO FETAL DEATH portion of the Fetal Death Report includes items 18a and 18b. It is designed to obtain the opinion of the certifier as to the initiating cause and prompts the certifier to report specific conditions.

A cause of fetal death is the morbid condition or disease process, abnormality, injury, or poisoning leading directly to fetal death. The initiating cause of fetal death is the disease or injury, which initiated the chain of morbid events leading directly to death or the circumstances of the accident or violence, which produced fatal injury. A fetal death often results from the combined effect of two or more conditions. These conditions may be completely unrelated, arising independently of each other or they may be causally related to each other; that is, one cause may lead to another which in turn, leads to a third cause, etc.

In some circumstances, the conditions reported in 18. Cause/Conditions Contributing to Fetal Death may indicate that this is not a fetal death. If the event does not meet the definition of a fetal death, the records will be removed automatically. 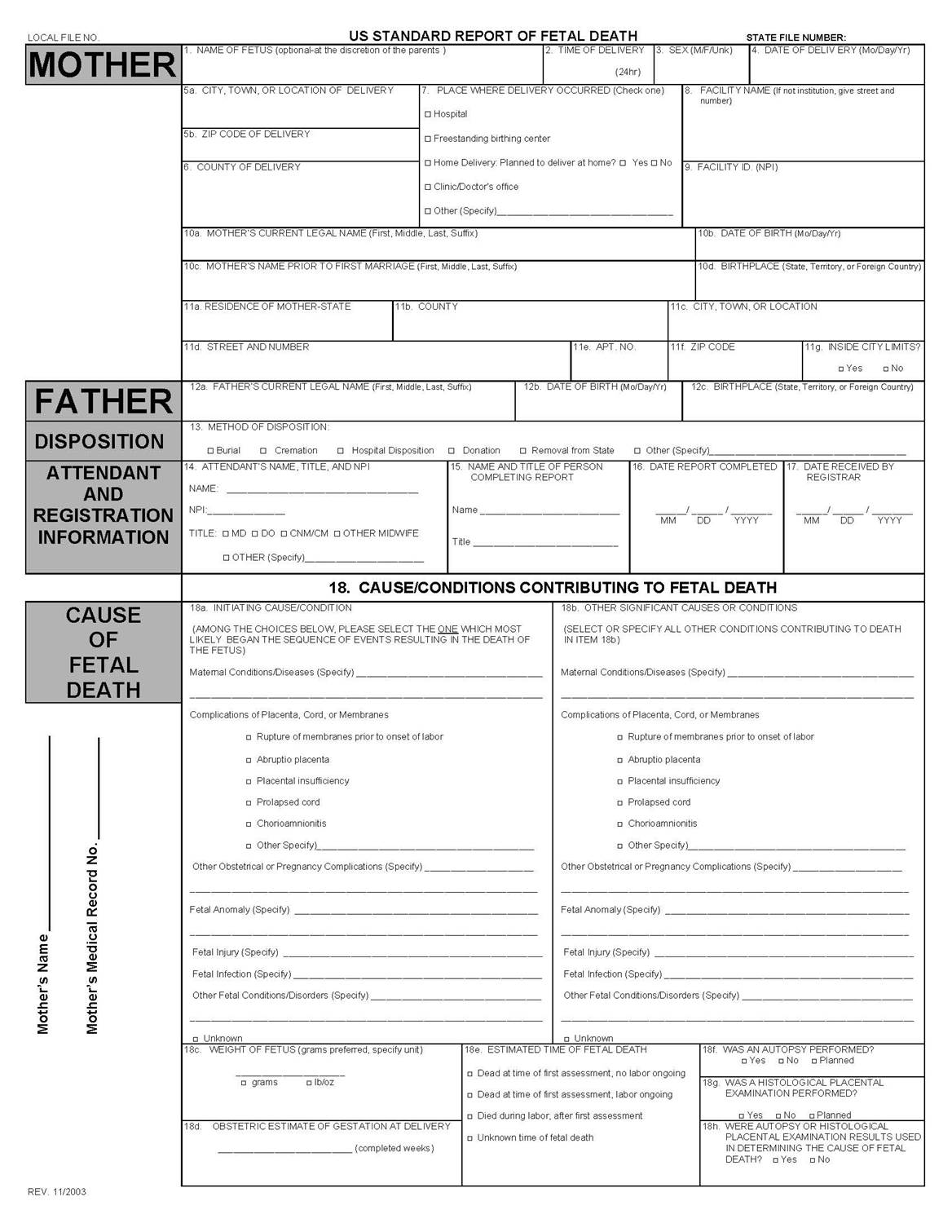