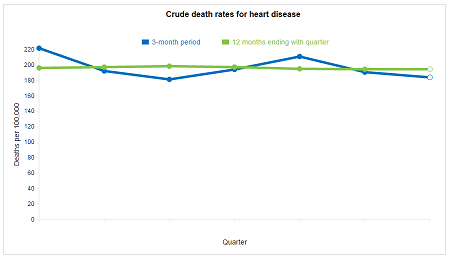 Provisional estimates are based on a snapshot of all the vital statistics data received and processed by NCHS as of a specified cutoff date. To adjust for the incompleteness of these data, individual records are weighted to independent provisional counts of all the deaths that occurred in each state by month. If the data available to NCHS for a specific state and month are less than 50% of the provisional count the data for that state and month are imputed. Provisional estimates closely match final data, but are subject to revision in future quarterly releases as additional records for that quarter are received.  Additionally, around 5% of death records submitted to NCHS are initially received with the cause of death pending an investigation, most of which are deaths due to external causes such as unintentional injuries, suicides, homicides and drug overdose. As a result provisional estimates for some external causes of death are not available for the most recent quarter or quarters to allow for these investigations, but will be available in future releases as updates are received and the reliability of the estimates improves (see Technical Notes for more details).

In this release of Quarterly Provisional Estimates, NCHS presents provisional estimates of death rates for the third quarter of 2019. Reliable estimates for the most recent quarters may not be available for some causes of death. The estimates are based on all death records received and processed by NCHS as of February 9, 2020. Estimates are presented for 15 leading causes of death (1) plus estimates for deaths attributed to drug overdose, falls for persons aged 65 and over, firearm-related deaths, human immunodeficiency virus (HIV) disease, and homicide. Future quarterly releases may include additional causes of death.