About the National Vital Statistics System

The National Vital Statistics System is the oldest and most successful example of inter-governmental data sharing in Public Health and the shared relationships, standards, and procedures form the mechanism by which NCHS collects and disseminates the Nation’s official vital statistics. These data are provided through contracts between NCHS and vital registration systems operated in the various jurisdictions legally responsible for the registration of vital events – births, deaths, marriages, divorces, and fetal deaths. Vital Statistics data are also available online. In the United States, legal authority for the registration of these events resides individually with the 50 States, 2 cities (Washington, DC, and New York City), and 5 territories (Puerto Rico, the Virgin Islands, Guam, American Samoa, and the Commonwealth of the Northern Mariana Islands). These jurisdictions are responsible for maintaining registries of vital events and for issuing copies of birth, marriage, divorce, and death certificates.

Standard forms [PDF – 1.9 MB] for the collection of the data and model procedures for the uniform registration of the events are developed and recommended for nationwide use through cooperative activities of the jurisdictions and NCHS. The process for implementing the latest revisions of the birth and death certificates and the fetal death report is now underway. The final 2003 revised certificates and accompanying technical information are available. NCHS has procedures [PDF, 164 KB] for collection, coding, editing, and transmitting multiple race and Hispanic original data. NCHS also produces training and instructional material, as well as the MedCoder automated system for coding and classifying cause-of-death information from death certificates.

CDC’s National Center for Health Statistics is working with State partners represented by the National Association of Public Health Statistics and Information Systems and the Social Security Administration to fundamentally re-engineer the processes through which vital statistics are produced in the U.S., including implementation of the 2003 revised certificates. The primary objective is to improve the timeliness, quality, and sustainability of the decentralized vital statistics system, along with collection of the revised and new content of the 2003 certificates, by adopting technologically sophisticated yet cost-effective model IT systems based on nationally developed standards and models. Information on the re-engineering activities and technical documents are available at the NAPHSIS web site, as well as at the NCHS certificate revision web site.

Additional programs related to the National Vital Statistics System include:

Through the National Vital Statistics System, data on vital events are now published in electronic form:

The special report, U.S. Vital Statistics System [PDF – 591 KB], provides an overview and history of the data system. For details, see related pages on specific vital events or related programs. Copies of birth, death, marriage, and divorce certificates may be obtained directly from the States.

Every Life is Vital… in the National Vital Statistics System 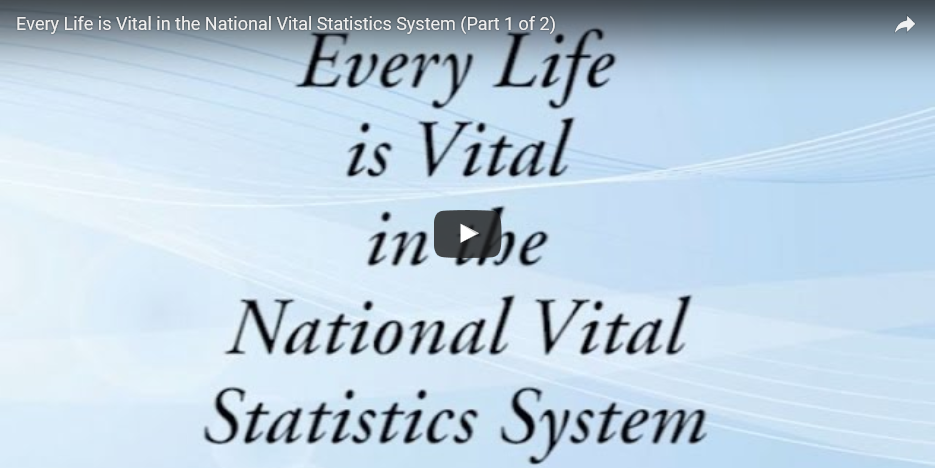 To permit the calculation of race-specific vital rates for 2000 and beyond and for revised vital rates for 1991-99 (using intercensal population estimates), the National Center for Health Statistics, in collaboration with the National Cancer Institute and the Census Bureau, has released bridged-race estimates of the U.S. resident population. NCHS has also released U.S. Intercensal Population Estimates by Specified Hispanic Origin Groups for the time period July 1, 1991 – July 1, 1999, for use in calculating vital rates.

Data pertaining to causes of death are classified and coded according to the International Classification of Diseases (ICD). This system is revised about every 10 years. The United States implemented the latest (tenth) revision of the ICD (ICD-10) starting with mortality data for 1999. Implementing a new revision of this system helps the national mortality system stay abreast of advances in medical science and terminology. This implementation, however, may introduce changes to mortality trend data for certain causes of death. This may be due to changes in the classification of medical conditions or in the rules that determine selection of the underlying cause of death. In order to estimate the effect of these changes on cause-specific mortality data, NCHS has performed a study of the comparability (also called a bridge-coding study) between ICD-9 and ICD-10, based on the 1996 public use multiple cause-of-death data file. This study produced a double-coded file, using both the ICD-9 and ICD-10 classification systems (ICD-9/ICD-10 Comparability File [PDF – 374 KB]), which is now available as a public-use file.