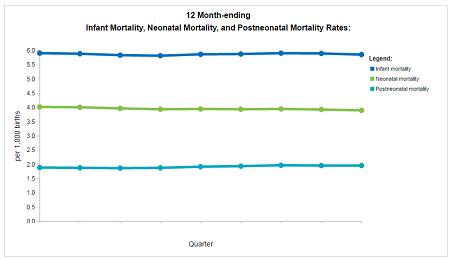 UPDATE: Recent improvements in timeliness of death certificate reporting have prompted a re-evaluation of the need for a 6-month lag time for the infant mortality Quarterly Provisional Estimates. Given the improvements in timeliness, provisional estimates of infant deaths will now be reported one quarter after the date of death, shortening the previous 6-month lag by 3 months. Please see the Technical Notes of the dashboard for more information.

Provisional infant mortality estimates are based on a snapshot of all vital statistics birth and death certificate data received and processed by the National Center for Health Statistics (NCHS) as of a specified cutoff date. To adjust for the potential incompleteness of these data, individual records may need to be weighted to independent provisional counts of all infant deaths that occurred in each state by month. Provisional estimates are subject to revision in future quarterly releases as additional records for that quarter are received. Furthermore, approximately one-third of infant death records submitted to NCHS are initially received with the cause of death undetermined or pending an investigation. Infant deaths are often subject to lengthy death scene investigations and autopsy, including many ancillary tests (e.g., toxicology and genetic testing) (1–3). As a result, provisional estimates of infant deaths are not available for the most recent quarters and are provided with a 6-month lag from the close of the quarter to allow for these investigations. The availability of more recent estimates may change in future releases as the timeliness of the data and the reliability of the estimates improve (see Technical Notes).

Estimates are presented for: infant mortality (deaths of infants under age 1 year per 1,000 live births), neonatal mortality (deaths of infants aged 0–27 days per 1,000 live births), postneonatal mortality (deaths of infants aged 28 days through 11 months per 1,000 live births), and death rates for the five leading causes of infant death (Congenital malformations, deformations and chromosomal abnormalities; Disorders related to short gestation and low birth weight, not elsewhere classified; Newborn affected by maternal complications of pregnancy; Sudden infant death syndrome; and unintentional injuries) (7, 8). These indicators were selected based on their relevance for public health surveillance as well as the feasibility of producing reliable estimates using available provisional data. Additional causes of death may be included in future releases.

The rates for a 12-month period ending with each quarter (i.e., 12-month moving average) are presented to account for seasonality. Quarterly (i.e., 3-month) estimates are not provided due to the potential instability of quarterly estimates as well as seasonal fluctuations in the number of infant deaths and live births. Estimates for the 12-month period ending with the most recent quarter are compared with estimates for the same time period of the preceding year. Differences are reported only if significant (p ≤ 0.05).